Elections in India draw to a close amid bitter political rhetoric | Asia| An in-depth look at news from across the continent | DW | 19.05.2019

Elections in India draw to a close amid bitter political rhetoric

Voters in India cast their ballots in the seventh and last phase of elections to choose a new government in New Delhi. This year’s polls witnessed a massive decline in the standard of campaigning by political parties. 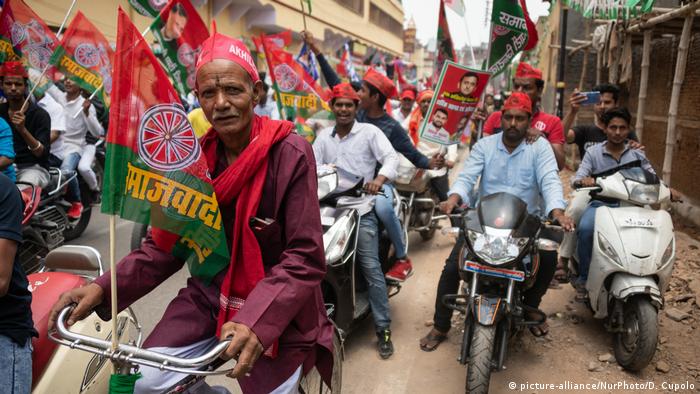 Elections for the final phase of the parliamentary or Lok Sabha elections drew to a close on Sunday as voters cast their ballots for 59 seats spread over seven states. Voting was also ongoing in Prime Minister Narendra Modi's constituency, Varanasi, in the northern state of Uttar Pradesh.

Around 40% of voters had cast their ballots by 1 p.m. Indian Standard Time (0730 UTC), according to Indian news agency ANI. Exit polls were expected later on Sunday, although most surveys in the past have been inaccurate in predicting the final winners.

This year's election witnessed campaigns and slogans which seriously challenged the country's inclusive political culture. Several top politicians were banned from campaigning for several days because of religious attacks and spiteful counter-attacks.

In Uttar Pradesh, which is the most populous state with 200 million people and thus very important for parties looking to win the national elections, witnessed severe verbal duels between electoral candidates. Chief Minister Yogi Adityanath announced to a crowd that if the ruling Bharatiya Janata party's (BJP) opponents had "faith in Ali (the son-in-law of the prophet Muhammad)," his followers "had faith in (the Hindu god) Bajrang Bali." His comments were a reaction to a speech by his competitor Mayawati of the local Bahujan Samaj Party, who had urged "especially Muslims" not to split their anti-BJP votes among different parties. Both were banned from campaigning for a few days.

Maneka Gandhi, a federal minister in Modi's cabinet was also banned for two days after video footage showed her warning Muslims not to vote against her and that if she won office without their votes, she would think twice before helping them out.

The president of the BJP, Amit Shah, who is close to Prime Minister Narendra Modi, told a rally in Assam state in April that if re-elected, the BJP would rid India of unauthorized migrants other than Hindus and Sikhs. The speech was seen as targeting illegal Muslim immigrants, mostly from Bangladesh.

"It is clear the BJP is trying to secure an electoral victory not by convincing Indians that it will implement a strong social, economic and political agenda, but by fomenting the Hindu majority's prejudices against Muslims and convincing them to vote along religious lines," political analyst Ajay Kumar Jha told DW.

Prime Minister Modi and his competitor from the opposition party, the Indian National Congress (INC), Rahul Gandhi, also had a public argument after Modi accused Gandhi's father, former Indian Prime Minister Rajiv Gandhi, of beginning as "Mr. Clean" but finishing as India's "Corrupt number one." Rahul Gandhi in turn, accused Modi of being a thief following accusations that the BJP government had used corrupt practices in securing the Rafale fighter jet deal with French company Dassault.

Campaigning sunk to a new low when the BJP's candidate in the central state of Madhya Pradesh, Pragya Thakur, stirred a controversy when she said that Nathuram Godse, the man who killed Mahatma Gandhi in 1948, was a patriot. Thakur, also known as "sage" or "Sadhvi," is an accused in a 2008 bomb blast in the western Indian city of Malegaon.

Women fight for power in India

Speaking at a campaign rally in Madhya Pradesh, Thakur said, "Nathuram Godse was a patriot, is a patriot, and will remain a patriot. Those who call him a terrorist should look within; they will get a reply in the election."

Speaking to DW, political commentator Hartosh Singh Bal said that these statements were proof that the BJP was seeking votes by doing what it did best: "raising and stoking fear among the Hindu majority of the potential dangers posed by the presence of a large Muslim minority in India."

Meanwhile, India's Election Commission (EC) has struggled to act against candidates who violated the vote's code of conduct, which includes avoiding religious and communal rhetoric.

Earlier this week, Election Commissioner Ashok Lavasa stopped attending after he felt that his decisions were being disregarded. "Minority decisions recorded by me in several cases continue to be suppressed in a manner contrary to well-established conventions observed by multi-member statutory bodies," Lavasa wrote to the Chief Election Commissioner.

The EC also ended campaigning by political parties a day earlier in West Bengal after members of the BJP and protesters belonging to the regional Trinamool Congress (TMC) clashed in Kolkata, destroying the statue of a centuries-old reformer in Bengal.

However, the BJP's opponents saw the ban as favoring Prime Minister Modi's campaign rallies.  "This order was aimed solely at giving a free pass to the PM's rallies," Congress spokesperson Randeep Surjewala told DW, questioning whether the MCC (Model Code of Conduct) had become "Modi Code of Misconduct."

Political analysts believe that the Election Commissions inefficacy in handling parties' misconduct could help some political sections, but it was still difficult to predict the winner. "If patriotic fervor benefits incumbent leaders, the prime minister is certainly well placed. But having travelled around the country this time, I can tell you that anyone who predicts a number with any certainty is a charlatan," Ruchir Sharma, author of Democracy on the Road: A 25-Year Journey Through India told DW.