A dispute between a local politician and Frankfurt supporters has escalated after a controversial police operation left several fans injured. The incident comes amid increasing tension between authorities and fans. 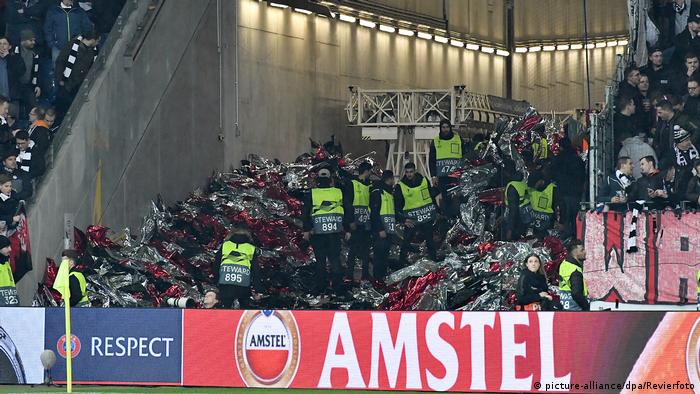 Eintracht Frankfurt supporters have accused a local politician of "waging a petty personal war" against football fans after confrontations with police ahead of their team's Europa League game against Shakhtar Donetsk on Thursday left several fans injured.

Two hours before kick-off at the Commerzbank-Arena, police confiscated a large banner which was lying on the ground in front of the north-west terrace, the home of Frankfurt's ultras, deploying batons and injuring fans in the process.

"Sending a police unit storming into a stadium, brutally brushing aside all in its way, to confiscate a banner, is beyond all proportionality," said a statement from the Nordwestkurve e.V. – an umbrella organization representing active Eintracht Frankfurt fan groups. "Contrary to police reports, several people suffered serious injuries, including an arm broken in two places and a broken vertebrae."

Justifying the operation, Frankfurt police said in a statement that the targeted banner contained a "foul and offensive" message regarding the local interior minister for the state of Hessen, Peter Beuth (CDU). When asked for more details, the police told DW that any insulting message displayed inside a stadium is cause for an intervention, regardless of its intended addressee.

However, while Nordwestkurve e.V. admitted that the message was "neither friendly nor particularly sophisticated," Berlin-based defense lawyer Rene Lau, who regularly represents football fans, told DW that it "certainly does not justify that sort of police intervention” and that "the actions of the police were disproportionate."

‘The stadium must burn'

Frankfurt fan groups believe this to be part of a wider political campaign by interior minister Beuth, who has recently drawn criticism from football supporters across Germany after demanding that the use of pyrotechnics inside stadiums be punished with jail sentences.

Earlier on Thursday afternoon, following comments made in an interview by outspoken Eintracht Frankfurt President Peter Fischer, police had been granted a warrant to search the stadium for pyrotechnics.

"The stadium must burn!" Fischer had told online broadcasting service DAZN on Wednesday. "And when I say the stadium will burn tomorrow, then it will burn so brightly that there will be too much light. So the match could be a big foggy for you."

Fischer's comments were widely interpreted as a reference to the use of pyrotechnics, which Frankfurt's supporters had employed during their team's three previous Europa League home games this season, but the 62-year-old later clarified his comments, saying: "I just wanted to say that we'll need a special atmosphere if we are going to progress. It has nothing to do with pyrotechnics. That can't be allowed to happen, especially given previous incidents."

Nevertheless, Frankfurt supporters believe Fischer's comments gave Beuth the perfect excuse to order a search of the north-west terrace, toilet facilities and a room in which Frankfurt's ultras store their flags, banners and other materials. It was in the wake of this search, in which police confirmed that no pyrotechnic devices or illegal items had been found, that the ultras then allegedly made the banner which was later confiscated ahead of kick-off. 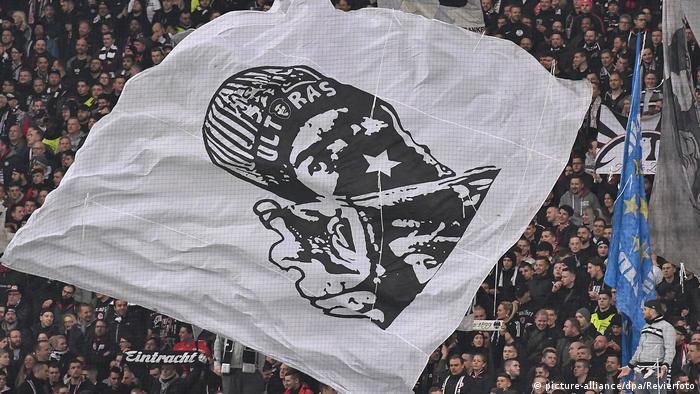 "Peter Beuth has achieved what he has been aiming for for weeks," said the statement from Nordwestkurve e.V of the initial searches. "This intervention was a deliberate step to provoke an escalation of the situation. The interview [given by Fischer] was the excuse Beuth needed to deliberately overstep the line. Nobody can seriously believe that this interview was the sole catalyst. This was a pre-planned operation which just needed justification.”

The operation in Frankfurt came amid increasing tension between police and football supporters in Germany, with several German states in the process of passing new legislation to give police greater surveillance and detention powers. The proposed new "police laws,” as they are commonly known, have drawn groups of rival football supporters onto the streets to demonstrate peacefully alongside civil rights campaigners.

Fan groups believe that football supporters are being targeted and used to test police powers. In November 2018, hundreds of St Pauli supporters were held without charge at Bielefeld train station. A month earlier, police in Dortmund were criticized for a similar operation in which they attempted to confiscate a banner from Hertha Berlin fans – something they admitted wouldn't have happened under the previous local government. 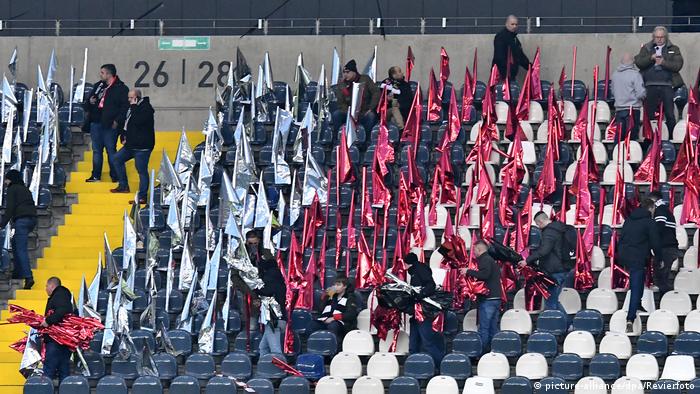 The flags of Eintracht Frankfurt fans were taken away

At a press conference on Friday, Beuth confirmed that the police operation came as a direct result of Fischer's interview. "The police considered such comments relating to an event attended by 50,000 people to be highly problematic, and took appropriate measures,” he said, describing elements of Eintracht Frankfurt's support as a "problematic clientele.”

"It is irresponsible when so-called fans are sent signals to behave dangerously by the club leadership,” he continued. "The playing-down of criminal activity surrounding football matches has to stop.”

According to the police's own Office for Sports Operations (ZiS), the number of football-related criminal proceedings across the top two divisions of German football dropped by over 19 percent in the 2017-18 season. The same report says 53 people were injured due to the use of pyrotechnics across the country's top three leagues, while 141 people were injured by police pepper spray.

Eintracht Frankfurt wished the supporters injured on Thursday evening a speedy recovery via the club's official Twitter account. After beating Shakhtar Donetsk 6-3 on aggregate, the Eagles have been drawn against Italian side Inter Milan in the last-16.