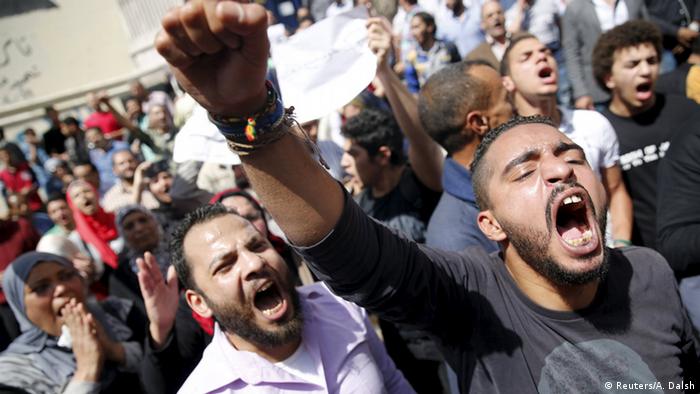 The demonstrators in Cairo, Giza and Alexandria called for President Abdel-Fattah el-Sissi to resign, chanting "we don't want you, leave," and "Sissi - Mubarak" in reference to strongman Hosni Mubarak who was toppled in 2011.

"The youth of the revolution are still here," 29-year old engineer Abdelrahman Abdellatif told Reuters news agency at the Cairo protest. "We are experiencing unprecedented fascism and dictatorship."

Protesters gathered outside the Cairo press syndicate also chanted: "The people want the downfall of the regime," which is the signature slogan of the anti-Mubarak revolt.

The wave of protests was sparked by a new demarcation deal with Saudi Arabia, which the government announced during King Salman's visit last week. The document puts the strategic islands of Tiran and Sanafir under Saudi control, ending decades of Cairo rule.

Both governments now maintain that the Red Sea islands rightfully belong to Saudi Arabia, which in 1950 asked Egypt to protect them from a possible Israeli attack.

However, many Egyptians accuse el-Sissi of selling territory to the rich kingdom, as Cairo kept the negotiations secret and announced the finished deal while Riyadh was pledging billions in new loans.

"If we give up the lands now, there will be more future concessions for him to stay in power, for a few more months," said Alaa Morsi, one of the protesters in Cairo.

Speaking at the Red Sea coast on Friday, the Egyptian president defended his decision and said the talks were secret to avoid public debate which could have harmed Egyptian foreign relations.

The Egyptian parliament still needs to back the demarcation deal before it goes into effect, but most of the lawmakers are firmly in the president's camp.

The latest rallies mark the first significant push against el-Sissi's rule since he came to power in the 2013 coup. Once hailed as nation's savior from Muslim Brotherhood extremists, the former general now faces a series of crisis of trust over corruption, poverty and unemployment.

In addition, relations with Italy have been strained over the case of Giulio Regeni, a graduate student who was found dead in a ditch outside Cairo. Several human rights groups accuse elements inside state security agencies of torturing and killing Regeni, which Egypt denies.

Most Germans keen on COVID vaccination passport 7m ago