Thousands of journalists in Egypt have demanded the removal of the country's interior minister and have vowed to ban printing his name, amid growing anger over the arrest of a pair of opposition journalists. 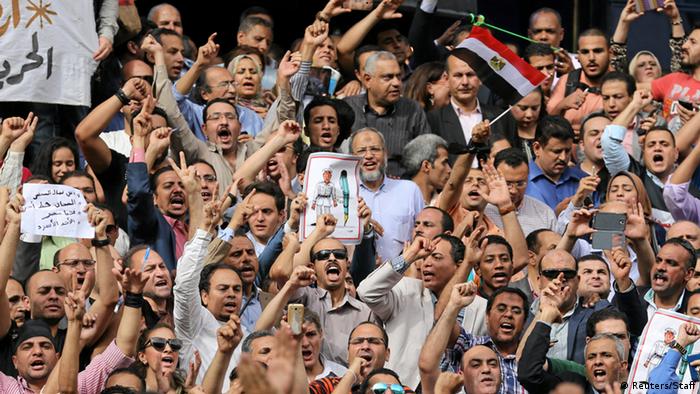 Some 3,000 journalists on Wednesday vowed not to print the name of the country's interior minister in protest against the arrest of two employees of an opposition website.

"We agreed to prohibit the publication of the interior minister's name and to publish only his picture in negative in a preliminary step towards banning all news of the Interior Ministry until the minister is dismissed," the journalists' union said following an emergency meeting.

On Sunday, two employees of the opposition website "Bawabet Yanayer," Mahmoud El Sakka and Amr Badr, were arrested by government authorities in an ongoing effort to squash dissent as anger at President Abdel-Fattah el-Sissi grows.

The two journalists were arrested over allegations they had called for anti-government protests over el-Sissi's recent controversial decision to hand over two Red Sea islands to Saudi Arabia. Earlier this week, Egypt's prosecutor general imposed a media gag order on the investigation.

Facing off against police outside the union headquarters, hundreds of journalists rallied on the steps chanting "Journalism is not a crime!"

Calls for minister to step down

Union officials said they were calling for the ouster of Interior Minister Magdy Abdel-Ghaffar because "he is the main [person] responsible the crisis."

The journalists also said they discussed plans to hold a strike next week if their demands weren't met.

Earlier Wednesday, dozens of pro-government protestors reportedly gathered in front of the union's office to show their support for el-Sissi, some chanting "El-Sissi, we love you" and "Journalists are thugs."

Egypt is looking into reports of at least 12 Egyptians dying in a fight with people smugglers in Libya, diplomats say. Three of the smugglers were also killed in the dispute, according to witnesses and a local official. (28.04.2016)