Egypt: Why not take a tour of Cairo's Garbage City? 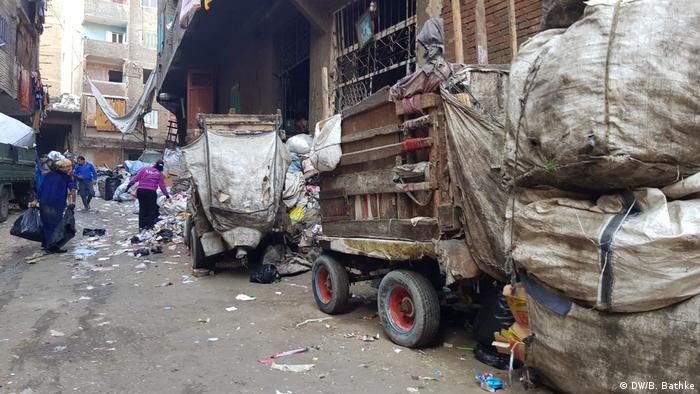 My tour guide slowly drives down a narrow, bumpy road framed by five-story buildings. It's a paradise for flies and there's trash everywhere you look; inside streets, house entrances, even on rooftops. We pass dozens of honking pickup trucks loaded way past their capacity, a shisha bar, various shops and goats.

"In the early morning, men collect the garbage from the roads," the guide tells me. "Their wives and children sort it by hand and store it inside their houses. Then they sell the recycled products – plastic bottles, metals and other valuable items – or create new materials from it."

Some 25,000 mostly Coptic Christians inhabit Garbage City, a slum settlement at the base of Mokattam hills, southeast of central Cairo. The Zabbaleen, literally "garbage people," have been the city's informal trash collectors for decades.

A slum with piles of foul-smelling garbage isn't usually high on the agenda of tourists who visit the land of pharaohs and pyramids. But when my tour guide suggests visiting this off-the-beaten-path attraction in favor of another mass tourism site, I immediately say yes. 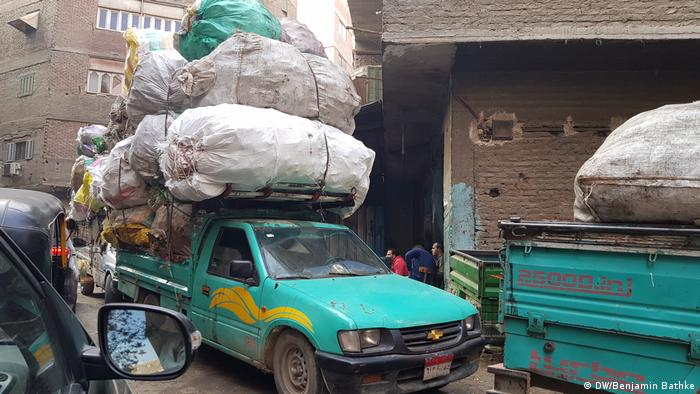 Egypt's sprawling capital has never established an efficient waste collection system for its over 20 million people, so the Zabbaleen, literally "garbage people," filled the void; they have been the city's informal trash collectors for decades

To Nader Khattab, a freelancer like most other tour guides, this flexibility is one reason why he decided to offer his tours with ToBadaa, an Egyptian startup that wants to be a social network connecting travelers directly with tour guides without involving middlemen.

"We can offer the guests a program according to their individual wishes and can extend the time here or there," the 23-year veteran told me. "That's not possible if you work for a regular tour operator."

Typically, foreign tourism companies contract local travel agencies, which hire freelance tour guides. With the foreign company keeping the lion's share of the booking fee, local operators usually cannot pay guides much. According to several guides I talked to, they make as little as $20 (€17.9) a day. As a result, they depend on tips from tourists and commissions from local shops and restaurants they generate business for, often to customers' chagrin.

Economic empowerment of tour guides as well as more affordable, higher-quality tours and experiences for tourists are the stated goals of ToBadaa. It's like Get Your Guide, but in the truest sense of the word.

Founder Ahmed Hamed, who shelved his career in the travel industry with companies including IBM to launch ToBadaa in early 2019, believes excluding middlemen gives ToBadaa a leg up on the likes of Airbnb Experiences and TripAdvisor. 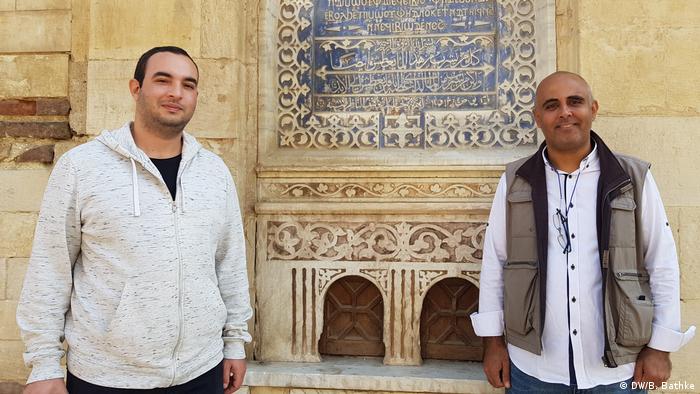 ToBadaa founder Ahmed Hamed (left), 29, and freelance tour guide Nader Khattab in Cairo's Coptic quarter. Hamed says none of the big players like Get Your Guide presently focus on the Middle East, which he calls an "untapped market." Men working in tourism receive 85% of the average wage in Egypt.

According to Skift Research, the tours and activities market could be worth $150 billion. Given that it still exists 80% offline and is projected to grow 9% annually over the coming years, it's safe to say that this sector is ripe for disruption.

Addaia Arizmendi, Innovation Specialist at the World Tourism Organization (UNWTO), thinks so, too. "Disrupting the traditional tourism sector can bring many new benefits and opportunities," she told me. "However, such enterprises need to be legitimate businesses — pay their taxes, meet all the relevant health and safety standards, and operate in a fair manner." 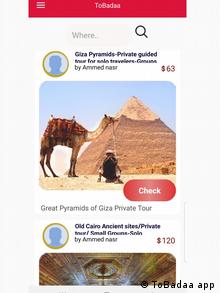 Screenshot of the ToBadaa app from February 25, 2020

On the ToBadaa app, each guide lists their own tours and sets their own prices. My 4-hour trip with Nader Khattab, for example, would normally cost $70 for eight hours and four people. When you subtract the 25% commission ToBadaa keeps from each booking, Khattab would still earn some $50, far more than the roughly $20 the average Egyptian makes per day in the broader economy.

According to founder Hamed, ToBadaa's currently 170 freelance guides have recorded over 350 bookings in Egypt and seven other countries, including Turkey, Italy and Indonesia.

Although the 6-month-old app is still very basic and a bit crude when I test it, ToBadaa's timing is good: Egypt's tourism industry has rebounded after international arrivals plummeted by over 60% from close to 15 million in 2010 to 5.4 million in 2016.

The upswing is mainly due to the three years of turmoil that started with the Egyptian revolution of 2011 and the bombed airliner carrying holidaymakers from Sharm El-Sheikh to Russia in 2015. Now in its fourth year of recovery, Egypt is nearing prerevolution numbers, thanks in part to a particular surge in arrivals from Germany.

ToBadaa and four other tourism-focused startups recently went through an incubation program in Cairo initiated by German nonprofit Enpact and the TUI Care Foundation, the charitable arm of TUI Group.

After 12 weeks of working on their business models with the help of mentors, the founders pitched during a so-called demo day in early December at Startup House Cairo, one of the epicenters of Egypt's nascent startup scene.

The winners, Halla Travel, a digital platform working with small travel agencies to develop the domestic travel market, and Blue Odysea, a platform for sustainable and regenerative traveling, both received a cash reward.

"In Egypt, it is not easy to set up a business for a lack of accessible expertise, finance and support services," TUI Care Foundation's Jost Neumann told me. World Bank data on Ease of Doing Business echoes this, ranking the Arab Republic 114 out of 190 countries.

But given the access to talent and resources due to Cairo's size — home to roughly one out of five Egyptians and the largest city in Africa, the Middle East and the Arab world — it's perhaps not surprising that the megalopolis ranks above average globally and is home to all of the top 20 tech startups in terms of money raised, according to a recent report on Egypt's startup ecosystem.

When it comes to female business ownership, however, the country is doing very poorly. With the percentage of self-employed women in Cairo being a mere 1%, women are dramatically underrepresented. In the tourism sector, which in many countries provides greater opportunities for women's entrepreneurship than the broader economy, things look even worse.

According to UNWTO's 2019 Global Report on Women in Tourism, only one in 50 people who work in Egypt's tourism sector are female. And only 1.5% of those women are self-employed. In other words: Only three in 10,000 people in the tourism sector, or 0.03%, are female.

Blazing the trail with geotourism

This makes Reham Abobakr, one of two female founders who participated in said incubator, not only an anomaly in Egypt's male-dominated entrepreneurship scene; having started the first company specializing in geological tourism in Egypt, she's also the absolute exception and a pioneer in the male-dominated tourism sector.

Geological tourism, or geotourism, is a distinctive form of nature-based tourism that sustains or enhances the geographical character of a place – its environment, heritage, aesthetics, culture and the wellbeing of its residents. 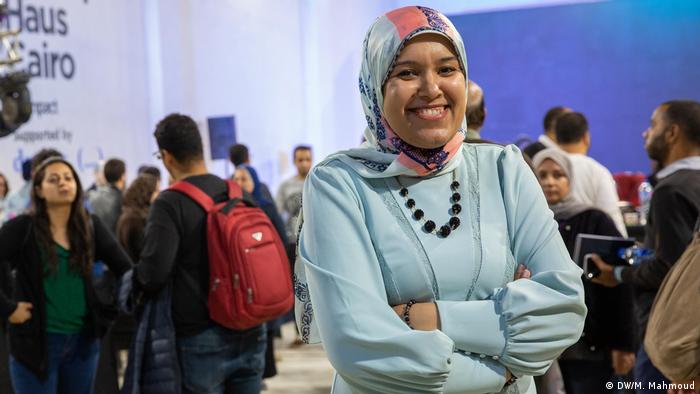 Reham Abobakr also founded the non-profit Rahala Foundation for Sustainable Development, which she calls "Geo Travel's CSR arm." It aims to develop remote desert areas in Egypt and is in keeping with two principles of geotourism: community involvement and benefit

Abobakr's goal for her startup, Geo Travel Egypt, is to "connect locals with travelers to explore our culture and natural heritage" as well as to "educate [travelers] on how to protect it."

"Nobody knows about Egypt's hidden treasures because there's no information online about geological sites," the 31-year-old told me at RiseUp Summit, one of the largest entrepreneurship events in the region. So she started exploring desert and mountain areas across her home country by herself and shared her experiences on Facebook.

Unlike ToBadaa' freelance tour guides, who cater to solo travelers and groups of up to four, Geo Travel employs tour guides (currently three including Abobakr) and focuses on larger groups of 20 to 45 people.

Trips, currently offered in English and Arabic, last between one and five days and include destinations like Wadi Al-Hitan ("Whale Valley"), one of Egypt's seven UNESCO World Heritage Sites known for its fossils of the earliest suborder of whales. 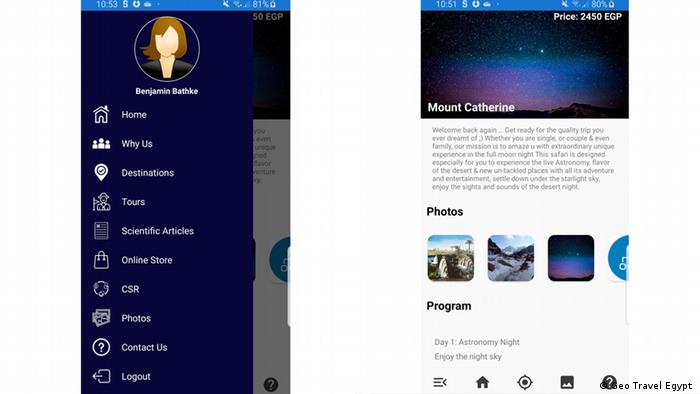 Abobakr says more than 300 tours with 1,800 participants have yielded $140,000 since the launch of Geo Travel in 2016. Geotourism, which started emerging around 20 years ago, is still in its infancy in many destinations. This makes determining market size and number of geotravelers difficult.

For quality assurance, Abobakr still tries every form of accommodation and modes of transportation herself. But in order to scale in Egypt and expand to five targeted countries including Indonesia and Germany, she plans to raise $1 million.

Abobakr has come a long way given women's legal constraints on property rights, access to credit and their ability to sign a contract, open a bank account and register a business in the same way as men. "Starting a company as a female in Egypt, especially one who wears a hijab, is really hard," she tells me. It's no surprise many women consider her a role model.

But after 3 and a half years of being in the tourism business, once skeptical males are starting to "take it easy" on her, as Abobakr puts it. She sees political instability as the greater challenge for tourism in Egypt than a lack of economic inclusion. "It gives foreigners a bad impression of Egyptians and tourism." 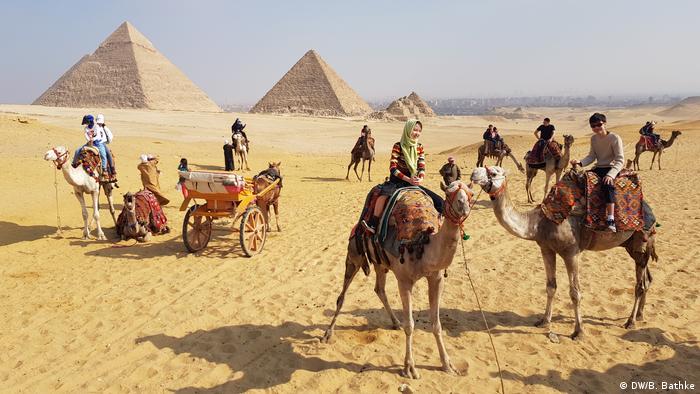 According to UN agency UNWTO, Egypt in 2018 ranked 36 and 32 of the top 50 global tourism destination destinations and most tourism receipts, respectively, up from spots 42 and 38, respectively, a year before. Tourism currently accounts for around 12% of Egypt's GDP.