The tomb of a royal goldsmith who died in Luxor thousands of years ago has been discovered, according to Egyptian authorities. It is the latest in a series of announcements meant to boost the troubled tourist industry. 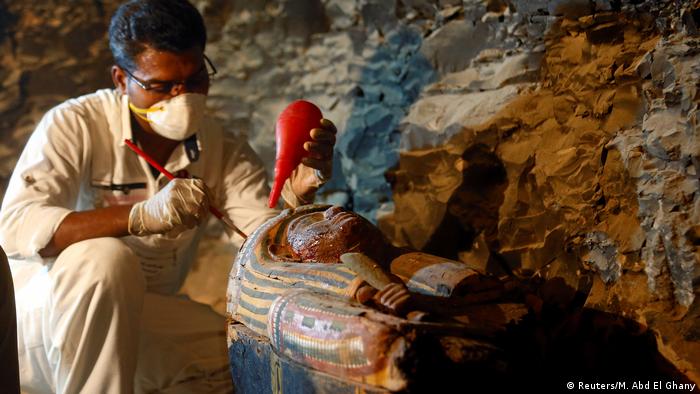 The Egyptian government announced Saturday that a pharaonic tomb more than 3,500 years old has been discovered in the southern city of Luxor. The finds date back to the New Kingdom (16th to 11th centuries BC).

The tomb is that of a royal goldsmith who lived during the reign of the 18th dynasty. The burial site was found in the Draa Abul Naga necropolis on the west bank of the Nile River, in a cemetery famed for its temples — where noblemen and top government officials were buried.

Antiquities Minister Khaled el-Anany said the tomb was in a state of decay, but that it contained a statue of the goldsmith and his wife as well as a funeral mask. He said a shaft in the tomb contained mummies belonging to ancient Egyptians who lived during the 21st and 22nd dynasties. 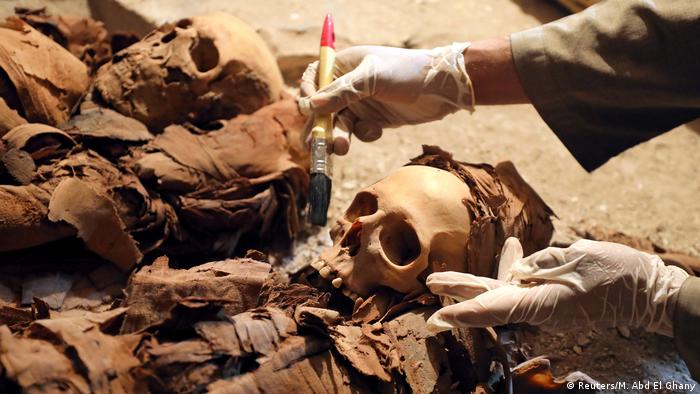 The remains found inside the tomb of a goldsmith, Amenemhat

The tomb of "Amun's Goldsmith, Amenemhat" features a sculpture carved into a recess of him seated beside his wife, according to the ministry. A portrait of their son is painted between them, it says.

Amun was an important ancient Egyptian deity who was worshiped throughout the country by the time of the New Kingdom, often under the name of Amun-Ra, after being fused with the sun god, Ra.

The ministry said another shaft led to a chamber where researchers found the mummies of a woman and her two children.

The woman reportedly died at the age of 50 and tests showed she had suffered from a bacterial bone disease, the ministry quoted bone specialist Sherine Ahmed Shawqi as saying.

Egypt has recently announced other discoveries. In April, archaeologists unearthed several mummies, colorful wooden sarcophagi and more than a thousand funerary statues near the city of Luxor. In March radar scans of King Tut's burial tomb showed two likely hidden chambers, sparking speculation that the remains of Queen Nefertiti may have finally been found.

Egyptian archeologists discovered the tomb, and the fanfare surrounding the announcement was used to boost Egypt's slowly recovering tourism industry, a key source of national income.

The industry has been struggling since the pro-democracy uprising in 2011 against Egypt's longtime dictator Hosni Mubarak.