A roadside bomb has hit a tourist bus near the pyramids of Giza, south of Cairo, killing at least two Vietnamese tourists. It was the first attack to target foreign visitors in almost two years. 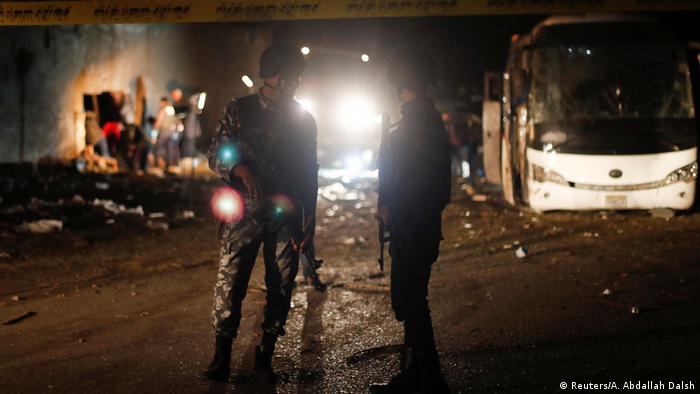 At least two people were killed and 12 others wounded on Friday when a roadside bomb hit a tourist bus near the Giza pyramids, Egyptian security officials said.

The Associated Press news agency cited an Interior Ministry statement as saying the bus was carrying tourists from Vietnam and that the two dead and 10 of the injured were Vietnamese. The Egyptian tour guide and the bus driver were also wounded.

Earlier reports citing the public prosecutor's office had said three Vietnamese tourists and the Egyptian tour guide were killed in the attack.

The improvised explosive device, which detonated at 6:15 p.m. local time (1645 UTC), was placed near a wall along the Mariyutiya Street in the Haram district near the Giza pyramids.

Security services were immediately dispatched to the area and have opened an investigation into the explosion.

No immediate claim of responsibility was reported.

Egypt has battled Islamic militants for years in the Sinai Peninsula in an insurgency that has occasionally spilled over to the mainland, hitting minority Christians or tourists. However, this is the first attack to target foreign tourists in almost two years.

The country's tourism industry is slowly recovering from years of political turmoil and violence that followed a 2011 uprising that toppled former leader Hosni Mubarak.

Every evening at 1830 UTC, DW's editors send out a selection of the day's hard news and quality feature journalism. You can sign up to receive it directly here

The pilgrims were on their way to a remote desert monastery when their buses were fired upon by suspected Islamist gunmen. The attack is the second in the same place in as many years. (02.11.2018)

Egypt says police have killed 19 Islamist militants from a cell suspected of carrying out a deadly attack on Coptic Christians. Gunmen ambushed the pilgrims last week as they traveled home from a remote monastery. (04.11.2018)

The rights group has said the arrests were made in house raids that began early Thursday. The arrests are part of an ongoing crackdown on dissent by President Abdel-Fattah el-Sissi's government. (02.11.2018)