Egypt's election commission has said presidential elections will be held May 26 and 27. Former army chief Abdel-Fattah el-Sissi, who orchestrated last year's ouster of President Mohammed Morsi, is the frontrunner. 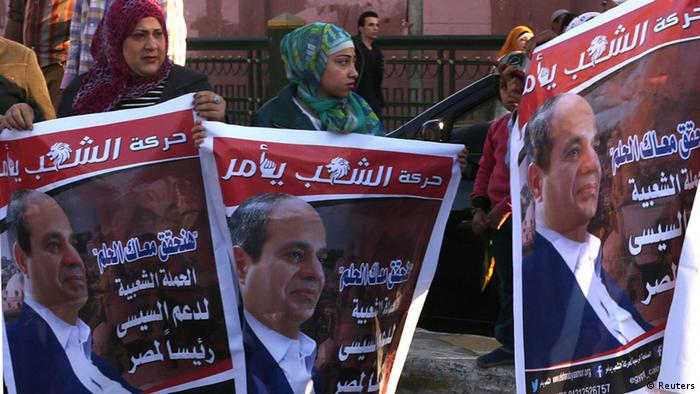 The commission said in Cairo on Sunday that the first round of voting would be held at the end of May, with a second round to follow if there was no clear victor. A winner is to be announced in June.

Sissi, who resigned his posts as defense minister and deputy prime minister on Wednesday to make himself eligible for the presidency, is widely seen as the favorite to win the election. The 59-year-old faces no serious competition.

Following the overthrow of Morsi, Egypt's first democratically elected president, in July, the country has seen mass protests against its military-backed interim government.

The Muslim Brotherhood, the Islamist group that backed Morsi and which has been at the heart of anti-government demonstrations, has vowed to continue their demonstrations in the wake of Sissi's presidential announcement.

"We are certain that the patriotic people of Egypt … will step up their ongoing peaceful, creative protests," the Brotherhood said in a statement on Friday, labeling Sissi a "coward" and "oppressor" who "violently quells all peaceful protesters."

Since Egypt's July coup, the Brotherhood has been the target of a sweeping government crackdown. Around 15,000 of its members have been arrested and hundreds of Islamist protesters have been killed in clashes with security forces since last summer. A further 529 of its members were sentenced to death on Monday over protest violence.