More than 400 Egyptians will face military trials in connection to violence that followed the ouster of former President Mohammed Morsi. In recent tribunals, hundreds of Egyptians have been sentenced to death. 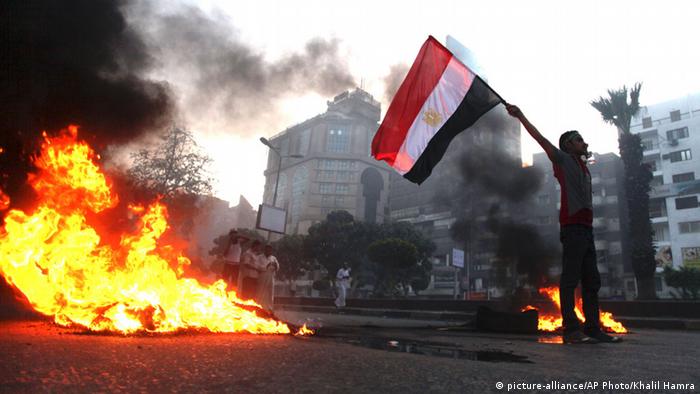 Morsi's followers have been the target of a relentless crackdown since ex-army chief Abdel-Fattah el-Sissi took power in July 2013.

In the first case to be handled by the military tribunals, 139 Morsi backers are expected to stand trial over the deaths of three policemen in the southern province of Minya.

The second case will see 299 Morsi supporters tried in connection with the deaths of five civilians in clashes between Islamist protesters and government forces and the burning of the Beheira provincial government headquarters in Damanhur.

The date of the violence was August 14, 2013, the same day that saw more than 700 people killed in clashes with security forces tasked with breaking up pro-Morsi sit-ins in Cairo. More than 1,400 people have been killed in the crackdown that followed Morsi's removal from power.

El-Sissi issued a decree in October of this year providing for military trials for civilians suspected of carrying out attacks on the government.

Thousands of civilians have been tried in military courts since the 2011 uprising that forced the departure of Morsi's predecessor, Hosni Mubarak. The trials have been widely denounced by human rights groups.

Over 15,000 people have been jailed during the crackdown following Morsi's ouster, and hundreds sentenced to death in mass trials. Earlier this month, 188 people were sentenced to death on charges stemming from the deaths of 11 policemen.

The planned tribunals come as a senior associate at the Carnegie Endowment for International Peace was barred from entering Cairo Saturday and deported to Germany.

Michele Dunne, a former US diplomat, was scheduled to speak at a conference organized by the Egyptian Council for Foreign Affairs, which is primarily made up of former Egyptian diplomats. Dunne's work is frequently critical of the Egyptian government.

This past August, Human Rights Watch officials Ken Roth and Sarah Leah Whitson were also refused entry into Egypt ahead of the planned release of a report accusing the government of potential crimes against humanity.

Opinion: Egypt's next insurgence is only a matter of time

The police state has returned to Egypt - and the regime hardly differentiates between terrorists and legal political opposition anymore. Egyptians will not stand for this forever, says DW's Naser Schruf. (13.12.2014)