Muslim Brotherhood members were among those on trial for their roles in an anti-government sit-in five years ago. The convicted are supporters of the former Islamist president, Mohamed Morsi. 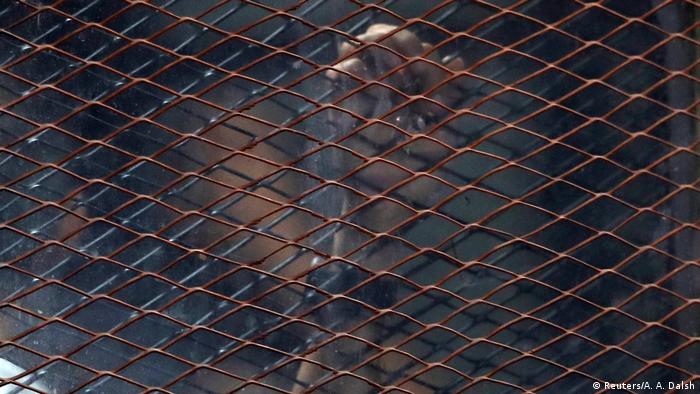 An Egyptian court sentenced scores of government protesters to death on Saturday for participating in an anti-government sit-in in 2013.

Members of the outlawed Muslim Brotherhood were among those convicted. The ruling by the Cairo Criminal Court will automatically be referred to Egypt's top theological authority, the Grand Mufti. Although he has the power to reverse a court's ruling, he typically affirms them.

He has been in prison since August 2013, when he was arrested while covering the sit-in. He was not among those sentenced to death, but it was not immediately clear what sentence, if any, he received.

The United Nations Educational, Scientific and Cultural Organization (UNESCO) awarded Shawkan the World Press Freedom Prize in April over the objections of the Egyptian government.

The sit-in was organized by supporters of former President Mohamed Morsi. His divisive rule prompted a military coup in July 2013, little more than a year after winning elections.

Security forces violently broke-up the sit-in on August 14, 2013, which resulted in more than 600 deaths. Months later, Egypt declared the Muslim Brotherhood a "terrorist organization" and began rounding up members and supporters.

Some Morsi supporters have already been sentenced to life in prison. And Morsi himself has been convicted of lesser crimes.

A camera, not a weapon

Many Muslim Brotherhood supporters were slapped with charges relating to terrorism and put in prison.

International human rights groups have slammed the mass trial. Amnesty International (AI) called it a "grotesque parody of justice" and said the government should drop all charges against those arrested for protesting peacefully.

AI noted that Shawkan, 30, was covering the anti-government protest in Rabaa Al-Adawiya Square when he was arrested.

The government accused him of supporting the Muslim Brotherhood and charged him with 24 crimes. He denies the allegations. Amnesty said the prosecution "has not presented any evidence that he was guilty of murder or any other violence."

"Since UNESCO gave him the prize and the state got angry and accused him of being a terrorist, we grew worried," she said.

"God willing, he will be cleared, but deep inside I am scared," she said, speaking at Shawkan's modest home near the Pyramids of Giza. "He was holding a camera and taking pictures, not a weapon."

Reporters Without Borders recently issued a statement saying the mere fact that an independent press photographer faced a possible death sentence makes it "one of the most appalling attacks imaginable on journalism." A cage holding defendants inside a Cairo courtroom, while security forces stand guard