ECB president Mario Draghi has rejected a plan by Donald Trump to soften US banking regulation adopted in the wake of the financial crisis, saying laxer rules are "the last thing we need" in financial markets. 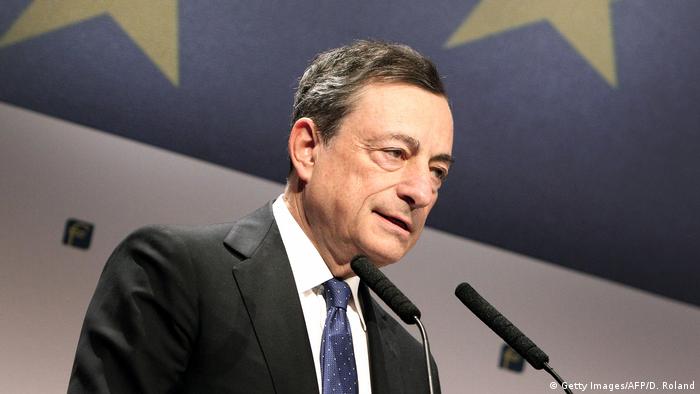 European Central Bank (ECB) president Mario Draghi said on Monday that financial regulations implemented since the 2007-08 global financial crisis have underpinned stability, and any effort to relax the rules was "very worrisome."

Speaking before the European Parliament's Committee on Economic Affairs in Brussels, Draghi called President Trump's plan to review and likely unwind US banking regulation as "the last thing we need."

"The fact that we are not seeing the development of significant financial stability risk is the reward of the action that legislators and regulators and supervisors have been undertaking since the crisis erupted," Draghi noted.

ECB President Mario Draghi has said the central bank is not going to change its ultra-loose monetary policy any time soon. He warned against watering down financial-sector regulations as planned by Donald Trump. (18.11.2016)

The Trump administration last week ordered a review of major banking rules that were put in place after the 2008 financial turmoil, signaling that looser banking regulations are coming.

While the regulations succeeded in stabilizing the American banking industry, European banks are still struggling to adapt to tougher rules. Therefore, any relaxation in the US would give the industry a competitive advantage over their EU rivals.

Post-crisis US banking regulation adopted under the so-called Dodd-Frank Act aimed to curb the actions of the finance sector that led to the "Great Recession" in the United States.

The rules required banks to demonstrate their solid financial grounding in annual "stress tests" as well as refrain from certain risky transactions, and significantly expanded the role securities regulators play in overseeing the investment industry.

Before signing executive orders to review the regulation on Friday, Trump said he wanted to "cut a lot out of Dodd-Frank."

"I have friends who can't start businesses because the banks wouldn't let them borrow because of rules and regulations and Dodd-Frank."

Trump's directives were quickly denounced by the minority Democrats in the upper house of Congress, who vowed to fight to prevent the law's undoing. "If we allow Wall Street to go unchecked again, it's only a matter of time before history repeats itself," Democratic Congresswoman Chellie Pingree said on Twitter.

Trump's decrees came on the heels of his meeting with business leaders, including chiefs of the largest banks and investment firms, such as JP Morgan Chase, Blackstone and BlackRock, which may stand to gain from looser rules.