ECB President Mario Draghi has said the central bank is not going to change its ultra-loose monetary policy any time soon. He warned against watering down financial-sector regulations as planned by Donald Trump. 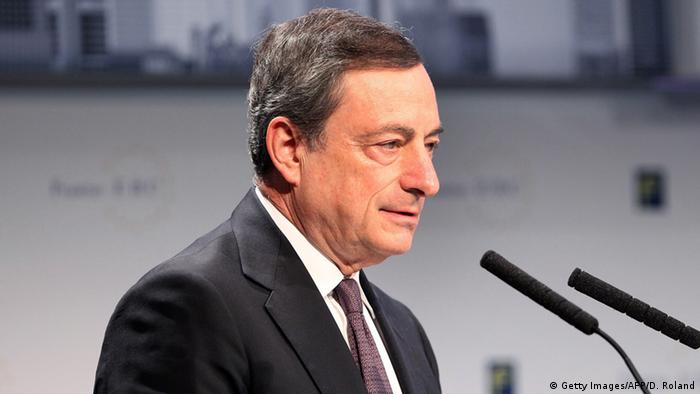 Speaking at the European Banking Congress in Frankfurt on Friday, the head of the European Central Bank, Mario Draghi, said nobody should believe the ECB would halt its ultra-loose monetary policy quickly. He said while there was more optimism now about the eurozone's economic recovery than there was a year ago, the near-term outlook was uncertain.

Draghi told the audience of bankers and policymakers the ECB stood ready to keep using all instruments within its mandate to work toward an inflation rate of just below 2.0 percent in the euro area, acknowledging that the dynamics of consumer price hikes in the 19-member bloc was still far too weak to justify an immediate policy change.

The ECB president said the economic recovery in the member states was still highly dependent on the central bank's fiscal shots in the arm, referring to the lender's huge bond-buying program.

Since March 2015, the ECB has been engaged in the large-scale purchase of sovereign bonds and assets, with 80 billion euros ($84.8 billion) being pumped into the program per month. In June of this year, the lender added corporate bonds to its shopping list.

Eventually, the program is to reach a volume of 1.74 trillion euros and is due to peter out in March of next year. However, many economists in the eurozone are certain the bond-buying program will be extended beyond that date.

Draghi said he was aware of many banks' current problems to turn a profit as the sat on piles of toxic credits and had to make provisions to boost their core capital, prompting them to grant fewer loans to corporate and private customers.

But he warned against backpedaling on stricter banking regulations that came into force in the wake of the global financial crisis. Draghi said the stricter rules had to be observed in the interest of the taxpayer.

US President-elect Donald Trump for his part had announced he'd do away with some of those stricter rules in a bid to increase banks' lending activities.

The governing council of the European Central Bank has decided to leave its current interest rates unchanged. This comes despite mounting criticism from eurozone lenders over shrinking profits. (20.10.2016)