Ebola outbreak in DRC: What is being done?

At least 19 people have died in connection to the Ebola virus in the western Democratic Republic of Congo. Here is a look at what authorities in the region are doing to address the outbreak. 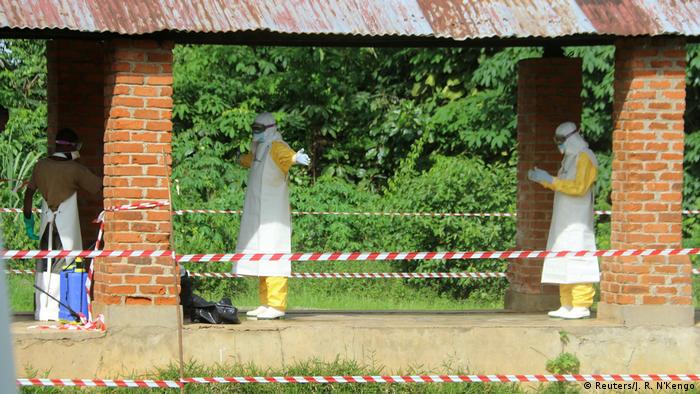 Thirty-nine reported cases, including at least 19 deaths — that's the latest Ebola count from Monday, May 14. The outbreak in the Equateur Province of the DRC is the first to raise international alarm bells since the deadly crisis that left over 11,300 people dead in Sierra Leone, Liberia and Guinea between 2014 and 2016.

DRC no stranger to Ebola

In contrast to West Africa, which had little prior contact with the virus, DRC is the country in which Ebola was discovered in 1976. During the last outbreak there in 2017, the country's ninth overall, four people died.

Ebola typically spreads through contact with bodily fluids, such as blood or sweat from infected persons or animals. There is no specific treatment for the virus, and it can prove fatal in up to 90 percent of cases.

By the time the Ebola outbreak was recognized in Guinea in March 2014, nearly 60 people had already died. DRC has seen 18 deaths over the past five weeks, but Congolese authorities together with the World Health Organization (WHO) and other international groups have now mobilized staff and resources to contain the virus.

The current outbreak's proximity to significant trade and population centers has authorities concerned. "We already have three separate locations that are reporting cases," said the WHO's deputy director-general for emergency preparedness and response, Peter Salama. "We have three health care workers infected and one already died." 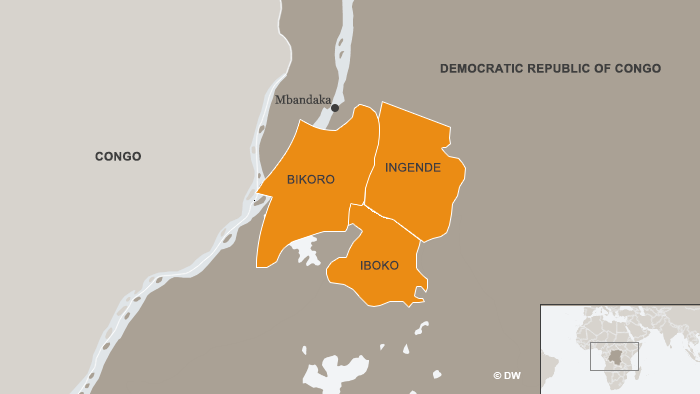 The Congo River flows past the Bikoro region, where the presence of Ebola has been confirmed — suspected cases have also been reported in the Iboko and Ingende regions

The Bikoro area, where the outbreak is centered, borders the neighboring Republic of the Congo and the Congo River, the region's main trade route. It is also located 150 kilometers (93 miles) from the large regional capital, Mbandaka. However, the region's infrastructure is poor and many areas are not reachable by road. The UN's World Food Program (WFP) has therefore facilitated an air bridge consisting of daily flights to transport staff, food and supplies to the region. Health teams have also been deployed to trace back the contacts of those people who might carry the virus and establish isolation wards.

Unlike during the West Africa crisis, vaccines are on hand this time around. "The vaccines are going to arrive on Wednesday or Thursday. We have enough of them," said the WHO's director-general, Tedros Adhanom Ghebreyesus.

The vaccine, developed by pharmaceutical giant Merck, was tested during the Ebola crisis in Guinea and is the most effective one produced thus far. "It's a targeted vaccination for people who are identified as possible contacts of people who have been infected," Tari Jasarevic, a WHO spokesperson, told DW. The logistics of getting the vaccine to those who need it, however, could still prove to be difficult, as it must be kept at minus 60 to minus 80 degrees Celsius (minus 76 to minus 112 degrees Fahrenheit).

Before 2014, Ebola research had stagnated. Outbreaks had never reached a global scale and critics noted that it had been neglected due in part to it having never having affected Western countries. During the West African crisis, only a handful of foreign health workers were treated with experimental drugs. Towards the end of the crisis, people were treated with antibodies of survivors.

Congolese authorities and international organizations including the WHO, Red Cross, the US Center for Disease Control and Medecins Sans Frontieres (MSF) are already involved in the operation and have pledged their support to the DRC government. WHO's director-general met President Joseph Kabila and traveled to Bikoro together with DRC Health Minister Oly Ilunga. During his visit, the minister tweeted that laboratory staff from Kinshasa had already arrived in Bikoro to start identifying Ebola cases.

The WHO says it has made $2.6 million (€2.17 million) available from its Contingency Fund for Emergencies to start its Ebola response in the DRC. The fund was established after the WHO and the international community came under fire over their slow response to the West African Ebola crisis. The Wellcome Trust and the UK have also said they would contribute 3 million pounds (€3.4 million) to contain the outbreak. Altogether, the WHO estimates that it will need $18 million for the next three months.