Nurse is first to die in Congo's latest Ebola outbreak

The first death of a new Ebola outbreak has been confirmed in the Democratic Republic of Congo. The World Health Organization said it was preparing for the "worst case scenario." 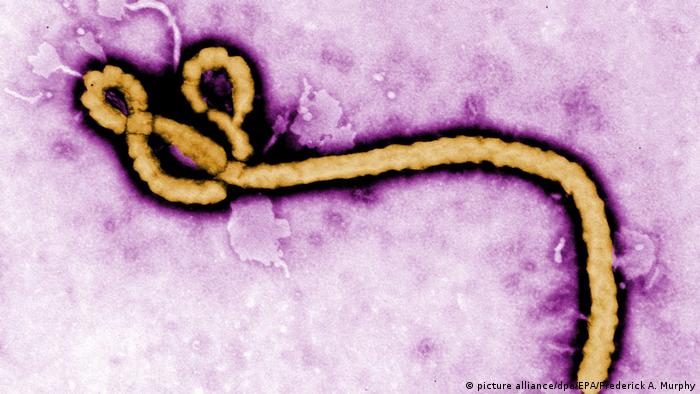 The Democratic Republic of Congo's Ebola outbreak has killed a nurse, according to the Health Ministry.

Officials declared the outbreak in the country's northwest on Tuesday after lab tests confirmed the deadly virus in two cases from the town of Bikoro in the Equateur province.

The nurse died overnight at a hospital in nearby Ikoko Impenge, where four new suspected cases of Ebola have been reported, Health Minister Oly Ilunga said at a news conference. Seven people with a hemorrhagic fever, including two confirmed cases of Ebola, lay in hospital late Thursday, he added.

The patients could have links to a police officer in Bikoro who died after exhibiting symptoms of hemorrhagic fever in December, National Institute of Biological and Bacterial Research director Jean Jacques Muyembe said. The officer's mother and 10 others then showed similar symptoms. Muyembe said officials would likely contain the outbreak.

Seventeen people have died from hemorrhagic fever in recent weeks, Ilunga said, and doctors are treating three more nurses for the symptoms. Officials must test nine patients for Ebola, just one virus responsible for such symptoms. Doctors have traveled to Bikoro to trace contacts, identify the epicenter and all affected villages, and provide resources.

The World Health Organization said on Friday it was preparing for the worst case scenario in the latest Ebola outbreak, including for the disease spreading to a major town.

WHO Deputy Director-General of Emergency Preparedness and Response Peter Salama told a regular UN briefing in Geneva that the health agency had alerted the nine neighboring countries but currently regarded the risk of regional spread as "moderate."

Separately, WHO Director-General Tedros Ghebreyesus tweeted that he and Congo's health minister had agreed that Ebola vaccines will be shipped "as quickly as possible."

Counting the current one, Congo has experienced nine outbreaks since researchers identified Ebola there in 1976. The country approved the use of an experimental vaccine during a flare-up almost exactly a year ago.

Without preventive measures, the virus can also spread quickly via bodily fluids from person to person and even to animals such as bats and monkeys. Ebola, which has no specific treatment, can prove fatal in up to 90 percent of cases.

None of the Ebola outbreaks in Congo have connections to the epidemic that began in 2013 and had left more than 11,000 people dead — almost all of them in Guinea, Liberia and Sierra Leone — before it was declared over in 2016. However, an outbreak did leave 49 people dead in the Central African country that year.

On Thursday, Nigeria's immigration service announced that it had increased screening tests at airports and other entry points as a precautionary measure. Officials in Guinea and Gambia also said they had heightened screening measures along their borders to prevent the spread. Such efforts had helped to contain the virus during the West Africa epidemic.