The condition of a Spanish nurse who contracted the virus from a patient has worsened as more of her contacts were quarantined. The US's top public health official claims Ebola poses the greatest challenge since AIDS. 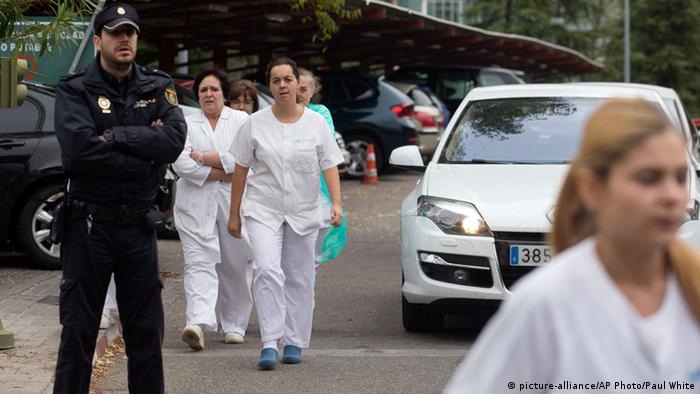 The condition of auxiliary nurse Teresa Romero was said to have worsened on Thursday, with the daily newspaper El Pais reporting on its website that she had suffered a respiratory failure.

Spain quarantined seven more people, including two hairdressers who had contact with the nurse who became infected with the deadly virus at Madrid's Carlos III hospital.

Romero helped treat two Spanish priests who were flown home from West Africa having been diagnosed. She is the first person believed to have contracted the disease outside of Africa and has admitted that she may have touched her face with protective gloves used for cleaning the room of one of the patients.

In addition to the Spanish case, which has generated concern over the alleged lack of training and equipping of staff, the alarm has been raised in two other parts of Europe. 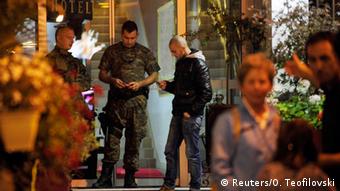 A British man showing symptoms of the Ebola virus, but not having tested positive for it, died in Macedonia on Thursday. Authorities said they had sealed off a hotel where the man had stayed and that fellow guests were being monitored.

A Prague hospital is also monitoring a 56-year-old Czech man who exhibited symptoms of Ebola. The man, who recently traveled in Liberia, was said to be in isolation at Bulovka hospital.

Health officials from the German state of Saxony confirmed on Thursday that a third Ebola patient, diagnosed while in Liberia where he worked for the UN, had arrived in the country. The man, who originates from Sudan, was being treated at Leipzig's St. Georg Clinic - one of seven health facilities in Germany with the capability to treat highly infectious patients in isolation.

Two other Ebola patients have also been flown to Germany in recent weeks. A World Health Organization (WHO) employee had fallen ill with the hemorrhagic fever in Sierre Leone was brought to Hamburg, where doctors were able to stabilize him and eventually release him last week.

Doctors in Frankfurt am Main continue to treat a second patient, a Ugandan doctor and WHO worker, who had also contracted the virus in Sierra Leone.

The threat posed by the most recent outbreak of Ebola was reminiscent of that presented by the AIDS virus, US Centers for Disease Control and Prevention (CDC) Director Tom Frieden said on Thursday.

"I would say that in the 30 years since I have been working in public health, the only thing like this has been AIDS, and we have to work now so that this is not the world's next AIDS," Frieden said.