Nigeria has confirmed five more cases of Ebola which has spread from three other west African nations. Saudi Arabia is awaiting tests on a Saudi traveler. The WHO says west Africa's death toll has risen to 932. 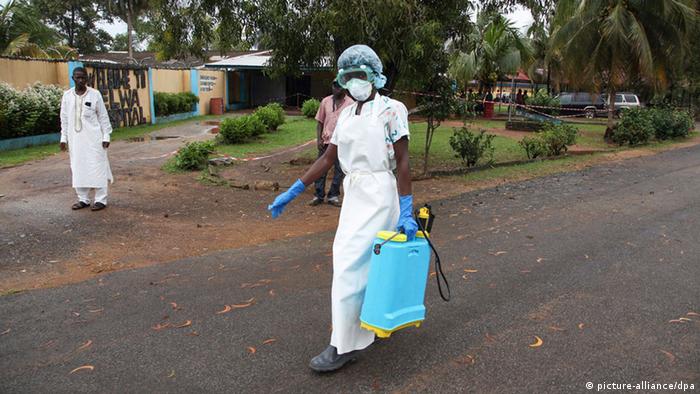 Nigerian Health Minister Onyebuchi Chukwu said a nurse had died of the disease, with five further cases of the disease having been confirmed - all inside the city of Lagos.

Chukwu said that all of those diagnosed with the virus were primary contacts of a Liberian Finance Ministry employee who flew to Nigeria, bringing the virus with him. The nurse who died was said to have treated the man, who became known as "the index patient."

The health minister said officials were setting up an Ebola emergency center that would become "fully functional" on Thursday. "We are embarking on recruiting additional health personnel to strengthen the team who are currently managing the situation in Lagos," said Chukwu.

Special tents are to be set up across Nigeria, to allow isolation wards to be rapidly set up in all of the country's states.

Nigerian health authorities admitted on Tuesday that they had not immediately quarantined Liberian official Patrick Sawyer - who contracted Ebola from his sister - immediately upon his arrival in Nigeria.

Displaying visible symptoms of the hemorrhagic disease, Sawyer was subsequently hospitalized and died in quarantine on June 25.

A Saudi man suspected of being infected with the virus died on Wednesday in the western city of Jeddah. Tests were still underway to see whether the 40-year-old man had contracted the disease. He had returned home on Sunday from a business trip to Sierra Leone.

The death rate among patients caught in the current epidemic is estimated to be between 50 percent and 60 percent.

WHO crisis meeting in Geneva

The World Health Organization began a two-day meeting on the epidemic in Geneva on Wednesday, to decide whether to declare an international crisis.

Releasing new figures, the UN agency said 932 persons had died from West Africa's Ebola outbreak, including 45 patients who died between August 2 and August 4. Most of the newly reported deaths were in Liberia.

The number of suspected, probable or confirmed cases had risen to 1,711, the WHO said.

Greece, a major gateway to Europe for migrants from Africa, said on Wednesday that it would take extra measures at entry ports, including isolation and monitoring in case of fever.

Spanish authorities said a Spanish missionary priest who tested positive for Ebola was to be flown home to Spain in a medically-equipped military Airbus A310.

The United States, Germany and France have all warned travelers to cancel trips to countries affected by the virus.

Two US medics who contracted the disease while assisting patients in Liberia were said on Wednesday to be improving after they were repatriated and treated with an experimental drug, said to be a mixture of antibodies.