The Cairo-based EastMed Gas Forum, whose charter was signed by several Mediterranean members on September 22, is the prime instance of regional multilateralism as the US scales down its active engagement in the area. 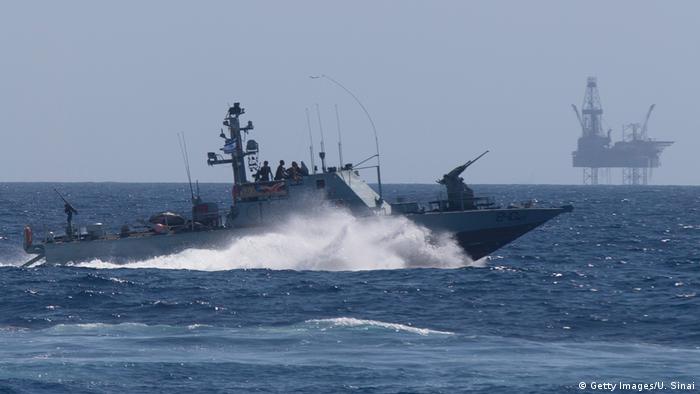 "The EMGF [EastMed Gas Forum] is the first example to bring Israel together with Arab countries, with the involvement of European member states. The bilateral structures we know are giving way to more complex geopolitical structures," Stefan Wolfrum, a researcher at the Germany Institute for International and Security Affairs (SWP), told DW. Adding that "the forum creates the framework for the Palestinian Authority to sit at the same table with Israel."

The heated debate on eastern Mediterranean gas started with the discovery of the Tamar field in 2009 and the Leviathan field in 2010 both off Israel, and the Aphrodite field off Cyprus in 2011. Egypt is the main regional producer, holding the 16th largest gas reserves in the world since significant discoveries made in the early 2000s.

EMGF is an organization of countries that host key investors, producers and consumers. Wolfrum argues that it has a clear potential, but that the ratification process to start the club "is happening in a complex moment for many involved countries, including Israel." Not all the experts predict a lengthy ratification, but there are two hurdles for EastMed: geopolitical tensions and financial constraints. 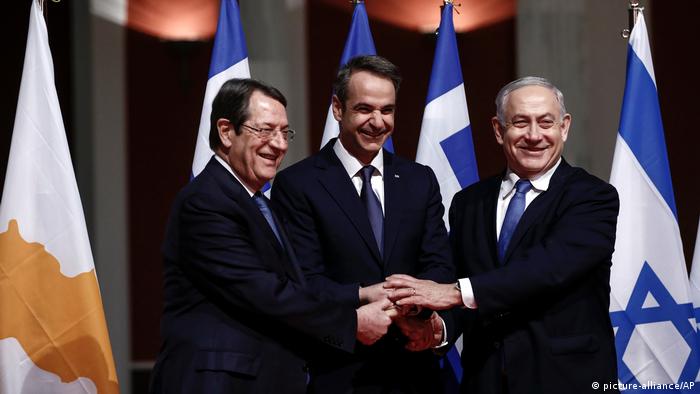 In January 2020, Greek, Cypriot and Israeli leaders signed an EastMed pipeline project to deliver Israeli gas to Europe. But will they secure funding for what's said to be the longest underwater pipeline in the world?

How does the financing work?

"Outside the region, the markets for gas from the east Mediterranean are theoretically in Europe and Asia," Charles Ellinas, a senior fellow at the Atlantic Council, told DW, adding that competition in Asia is very intense, also because of the continued use of coal in power generation. For instance, Egypt tried to sell cheap gas to Asia, "but buyers were not interested."

The Cypriot expert argues that Europe can't be a market for EastMed gas either. The European Union plans to decarbonize its economy by 2050, "which means that its gas consumption by 2030 must go down by 20-25%," he said.

That means EastMed gas could only be used regionally. "But regional markets are not massive, prices will have to be low and margins will be low. This gas, targeting regional markets, will not make anybody rich," says Ellinas, explaining that the EMGF could still open the way for the Saudis to buy gas from the region.

Seth Frantzman, executive director at the Middle East Center for Reporting and Analysis, agrees on the forum's potential. At the same time, the Israeli analyst expects friction. "If you tie together these countries, adding Jordan and the Palestinian Authority, it creates a form of arch, from which you can create better political alliances. The question is whether some adversaries might want to oppose it."

Frantzman, like Ellinas, sees the need for Turkey to refrain from provocations. "Turkey's leadership wants to create crisis every few months to deflect the attention from internal difficulties. If it shifted toward a more collaborative standing, it would be invited to join the forum," he told DW.

Turkish experts suggest that the forum's scope would be limited if Ankara were left out. "Without a stable environment conducive to the new investment it is unlikely that financiers and operators will pour investment dollars into new infrastructure projects in the region," Mehmet Ogutcu, chairman of the London Energy Club, told DW.

He argues that Ankara's participation should happen without any precondition. "Like it or not, Turkey is game maker or spoiler in the region. Turkey must be invited at the earliest possibility; otherwise positions within the forum will be entrenched and will be difficult to bring Turkey in due to concessionary demands from Cyprus and Greece, in particular in return for opening the door to Turkey."

Ogutcu thinks Ankara could be weakening the forum on purpose, "creating alternative structures that may deepen hostilities and make the EastMed energy development a distant prospect." 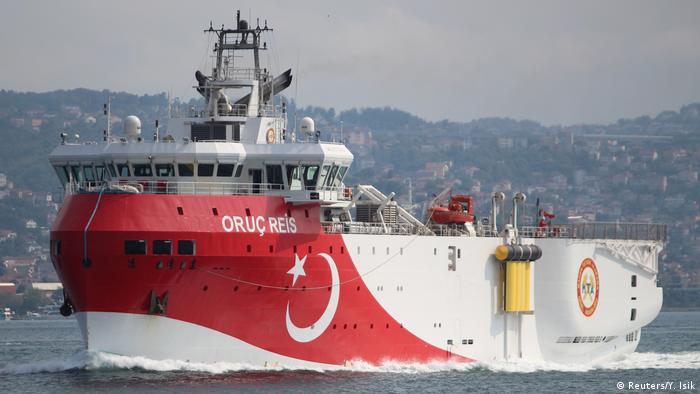 Turkey has begun gas exploration in contested territorial waters off the Greek coast, escalating tensions between Athens and Ankara

Experts see a mediator in the EU, with Italy and Germany leading the pack. Italy's ENI is the most important energy company in Egypt, Cyprus and Lebanon — which, alongside Turkey and Syria, is the only regional player not taking part in EMGF.

"Italy clearly wants to be part of a platform for dialogue and producer-consumer coordination in an otherwise difficult context for energy resource exploitation. Italy aims at a mediating role, not least because it has good relations with all the other players involved," Luca Franza, head of energy at Istituto Affari Internazionali, told DW.

Mentioning the Turkish navy that blocked ENI's drilling activities offshore Cyprus in 2018, the analyst concedes that relations between Turkey and Italy are not idyllic. He argues though that Rome and Ankara have compatible interests in Libya, and beyond: in August 2020, the two countries conducted joint military drills in the Mediterranean. The same month, Italy conducted drills with Cyprus, Greece and France.

Franza says that Germany could be another mediator, "but its reach is somehow limited as the largest European economy has no direct stakes in EastMed." Conversely, Ellinas argues that Berlin is best placed also because it holds the presidency of the Council of the European Union.

In September, Greece and Turkey agreed to resume exploratory talks. Earlier this month, the European Council concluded that the EU would defend its member states' interests in case of Turkish unilateral actions "in breach of international law."

One Turkish vessel remains off Cyprus, whereas a second left for maintenance this week. Last month, Ankara floated the idea of a two-state solution for Cyprus.

Franza suggests that the US, despite its reduced presence, maintains a catalyst role in the project. "We should not forget that with the Eastern Mediterranean Security and Energy Partnership Act of 2019, the US facilitated the Israel-Greece-Cyprus alliance in the EastMed," he said.

"The aim to counter Russia is very explicitly mentioned in the act, through which the US took the very significant step of lifting its arm embargo on Cyprus. It is no coincidence that the EastMed Gas Forum was launched a couple of weeks later [on January 16, 2020]," he concluded.