Eastern Ukraine: plan 'B,' as in 'bombs'

Tanks, howitzers, fighter jets - Kyiv’s rulers are using heavy military equipment to try and push separatists out of Ukraine. Their core mission is to regain control over the border with Russia. 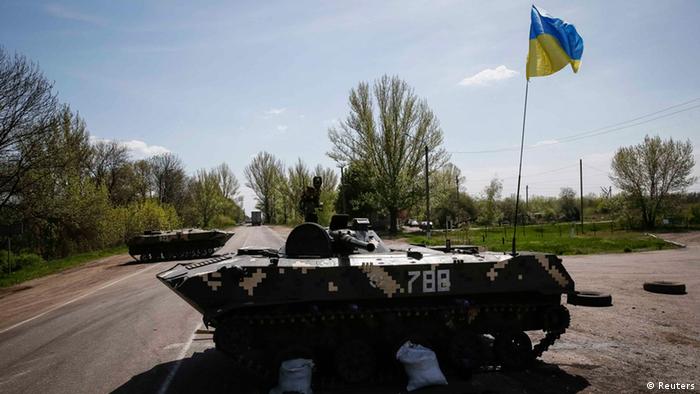 The Ukrainian parliament in Kyiv Thursday (03.07.2014) approved replacement of the country's defense minister, against the backdrop of fresh fighting in eastern Ukraine. Valeriy Heletey, who had been nominated for the post by President Petro Poroshenko, succeeds Myhailo Koval, whose term in office ended after only three months. Observers in Kyiv say the change will help the newly elected president strengthen his governmental influence.

"I'm sure that Ukraine will prevail," said Heletey in his inauguration speech before members of parliament. Indirectly threatening Russia, he promised to hold "a victory parade in Ukrainian Sevastopol," i.e. on the Black Sea peninsula of Crimea - which Russia annexed in March.

The new defense minister took over business just a few days after the Ukrainian army re-launched its anti-terrorism operation against pro-Russian separatists in the eastern Ukrainian regions of Donetsk and Luhansk. The President announced the army was switching to "plan B" because the "terrorists" had not complied with the agreed 10-day truce. Pro-Russian fighters neither gave up nor returned to Russia, he said.

Fighting on the Ukraine-Russian border 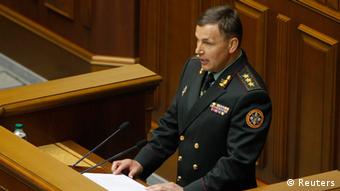 Details of Poroshenko's plan are being kept secret. The Ukrainian army asked journalists and campaigners recently not to publish information regarding troop movements, after the Internet was flooded with pictures showing combat tanks, cannons, fighter jets and helicopters. Few bloggers seemed aware that they may have been putting soldiers' lives at risk.

The Ukrainian army intends to regain control over the country's border with Russia with the help of Ukraine's security service and the police, said Volodymyr Horbatch from the Kyiv Institute for Euro-Atlantic Cooperation.

"They want to stop mercenaries and military equipment from coming into the country via the border," Horbatch told Deutsche Welle. Ukrainian border guards have since returned to one of the three abandoned border crossings in eastern Ukraine. There are reports of ongoing fighting. "The separatists and ammunition depots are coming under massive attack from the air and by artillery," Horbatch said.

Ukraine's soldiers welcomed the fact that fighting has resumed, stressed retired Colonel Petro Nedselsky, who used to serve in Ukraine's military reconnaissance. "Army members complained that the political leadership was indecisive when it came to fighting the separatists," said Nedselsky, adding that they no longer do so. "After 27 Ukrainian soldiers were killed during the truce, it was clear that they had to act," he told DW. 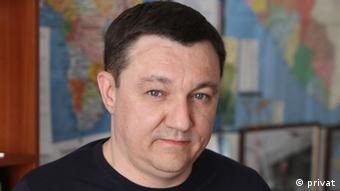 But there is also criticism of the military operation in eastern Ukraine. Valentin Badrak, director of Kyiv's Center for Military Studies, couldn't rule out that the government in Kyiv may not have a clear-cut plan for operations in the east. But he is still optimistic: "The soldiers' fighting spirit is getting stronger."

One of the most vocal critics of the current mission against the pro-Russian fighters is that of Kyiv-based defense journalist and blogger, Dmytro Tymtchuk. In an analysis, he wrote that the anti-terrorism operation is being de facto managed by the security service and not the army.

He said the reason was that the Ukrainian army had for years carried out joint military drills with NATO troops, while there had been only few joint drills with the country's police force or with the security service.

International talks aimed at a resumption of Ukraine's ceasefire are to reopen by Saturday under an agreement reached at a meeting of foreign ministers in Berlin. Fighting reignited in eastern Ukraine on Monday. (02.07.2014)