Prosecutors have demanded anti-immigration politician Geert Wilders be fined 5,000 euros on charges of hate speech. The trial concerns a 2014 speech in which the prosecution said Wilders incited hatred against Moroccans. 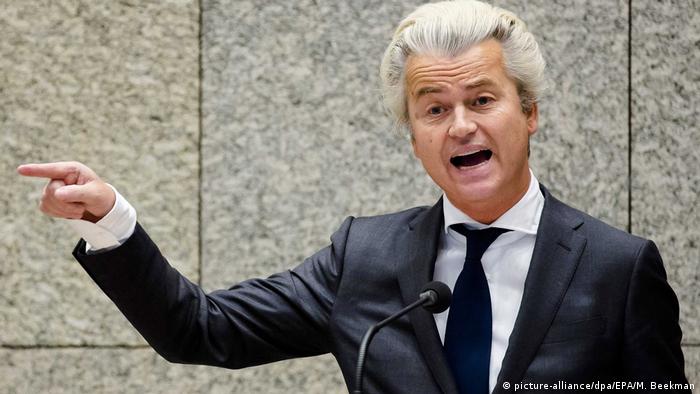 Dutch prosecutors pushed for the 5,000 euro ($5,400) fine against far-right, populist lawmaker Geert Wilders in court on Thursday. However, they did not seek a prison sentence or the highest possible fine for the charges of hate speech and incitement of violence.

In a 2014 televised speech at a café in The Hague, the leader of the nationalist Freedom Party (PVV) concluded his speech by asking supporters if they wanted more or fewer Moroccans. The supporters chanted "Fewer! Fewer! Fewer!" while a smiling Wilders said: "We're going to organize that."

Prosecutor Wouter Bos said on Thursday that the court should "send a clear signal that statements like these do not belong in the Netherlands."

The prosecution said it proved comments made by Wilders during regional campaigning were planned and deliberately targeted a specific ethnic group, which is a violation of the Dutch constitution.

Bos cited one of the numerous Moroccans who filed criminal complaints against Wilders due to his comments.

"You only want less of something - that is bad and not good," Bos said, citing the complaint. "Wilders gives me the feeling that I am worthless."

Wilders, who has not attended the proceedings, which he described as a "political trial," said the prosecution's recommended sentencing request was "utter madness." He also reiterated his complaint that the trial was an effort to silence him.

Members of Wilder's Freedom Party unfurled a banner in the lower house of parliament with a photograph of Wilders and a red X over his mouth.

The anti-immigrant leader has never apologized for the remarks, maintaining that he was just "saying what millions of other Dutch people think." Wilders has also promised to close mosques, impose a ban on Muslim immigrants and pull the Netherlands out of the European Union.

The trial comes ahead of Dutch general elections in March. Opinion polls show that Wilders' Freedom Party is virtually tied with the liberal VVD party of Prime Minster Mark Rutte.

A final decision in Wilders' hate speech trial is scheduled for December 9. In 2011, Wilders was acquitted of similar charges over comments about Islam.