The tradition of dressing up in blackface makeup as the helper of St. Nicholas has been under fire in the Netherlands for years. Confrontation between the two sides of the debate got off to an early start this year. 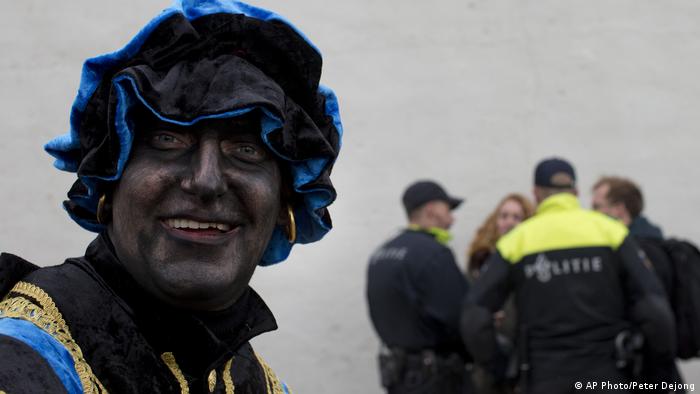 Police arrested more than 100 protesters in the town of Maassluis, near Rotterdam, on Saturday during a confrontation between supporters and opponents of Black Pete. For years, detractors have condemned the character, a helper of St. Nicholas in Dutch tradition, as a racist caricature.

A ruling by a court in Amsterdam that "Zwarte Piet" or "Black Pete" is a racist caricature that can be banned from public celebrations has been overturned. The figure has been increasingly controversial in past years. (12.11.2014)

"We arrested about 100 people who were demonstrating in Rotterdam, where the protests were banned for the day," said local police spokeswoman Lillian van Duijvenbode to French news agency AFP.

Current look dates back to 1850s

According to folklore, Black Pete is a Moor who originates from Spain and helps St. Nicholas as he decides which children have been well-behaved enough to receive presents. His current appearance comes from an 1850s children's book and reflects what would now be recognized as a racist stereotype: Afro hair, large red lips and a clownish appearance.

This is further compounded by the fact that in parades and reenactments for children, the character is almost always played by a white person in blackface.

Thousands of people came out to the Maassluis celebration to mark the beginning of the Christmas season. This included a heavy police presence to protect St. Nicholas' sidekick and a ban on protesting, which failed to deter demonstrators.

"We asked them to stop their demonstration at three different places in town, but they refused," said van Duijvenbode.

Around 20 far-right activists came out as counterprotesters. Activist John Morren told the Associated Press that "we are demonstrating for the preservation of a children's party," and to protect Dutch tradition.

Dutch Prime Minister Mark Rutte has appealed for both sides to remain peaceful in their debate in light of the Christmas season.