Dutch create neighborhood for dementia patients | Europe | News and current affairs from around the continent | DW | 16.03.2012

A neighborhood in the Dutch town of Weesp has been created to house people suffering from Alzheimer's and other forms of dementia. It's described as a pioneering approach to mental healthcare. 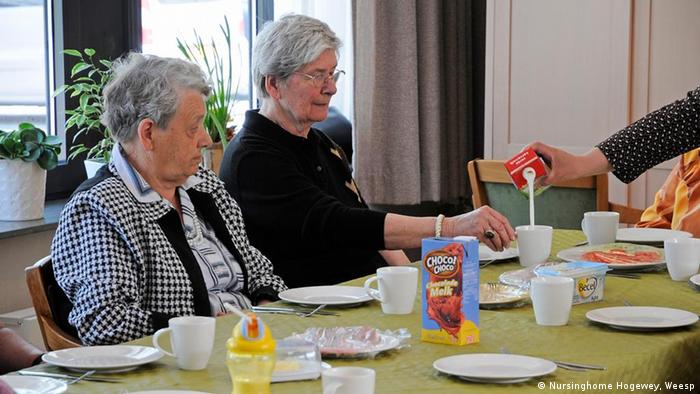 The population of the western world is ageing, leading to an increase in the number of people affected by Alzheimer's and other forms of dementia. According to the organization, Alzheimer's Disease International, one in 20 people above the age of 65 suffers from some form of dementia. That's more than 35 million people in the world. It's estimated this number will rise to 115 million in less than 40 years.

There's no cure for this ailment, but there are treatments which can help ease the symptoms. In the Netherlands, a nursing home in the town of Weesp has gone a step further. It's created a whole neighborhood for people suffering from dementia. 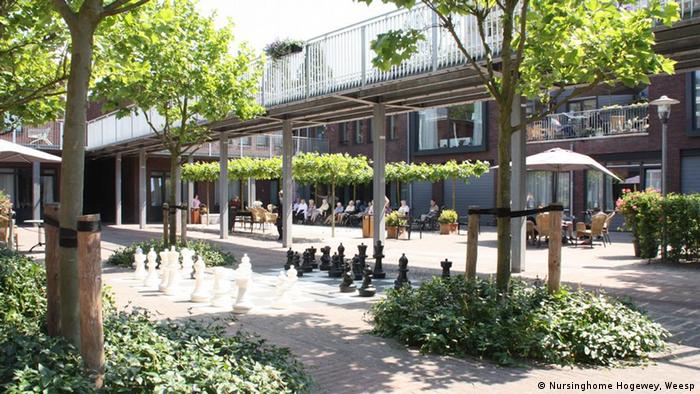 Hogewey's residents can enjoy the outdoors

Hogewey looks like any other Dutch neighborhood. There are low apartment blocks facing large squares decorated with flowers, fountains and ponds. There are terraces, gardens and even a giant chess board.

Isabel van Zuthem, the communications advisor of the Hogewey project, says the idea is to provide a normal environment for the patients. “When you have Alzheimer's, you walk around and have the feeling that you're lost,” she says. “It's very, very important that the surroundings, the atmosphere and the way things look are as normal as possible because that makes them feel comfortable.”

A choice of lifestyle

There are 23 houses at Hogewey; some are more up-market than others. They're shared by five or six patients who have common interests. This allows the residents to continue the lifestyle they had before they fell ill. The houses are also categorized according to lifestyles, for instance "Christian," "urban," "traditional" or "cultural." Depending on the house they live in, residents enjoy different types of meals, hobbies and schedules. For instance, the cultural lifestyle residents have a late breakfast on the weekends while the Christian patients make time for religious activities. There's also a range of extra activities on offer from music clubs to gardening. 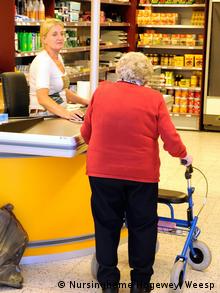 Hogewey is a self-contained neighborhood

Each house has its own staff - up to four people. The team does all sorts of tasks from bathing the residents to doing their laundry, cooking their lunch or giving them a manicure. Nurse Clyde Maayen says they require constant supervision. “You can't leave them alone because there are moments when they're very depressed," he says. "And if you don't have people to take care of them at that moment then things can go wrong. Especially if they're angry."

Even at night when they're sleeping, there's a device which detects any movement in each house and alerts the nurses to anything suspicious. 240 people are employed at Hogewey - they're not all nurses but they all know how to take care of the residents.

All the benefits of home

The neighborhood has its own supermarket, theatre and café-restaurant which are open to the general public as well. Communications advisor Isabel van Zuthem points out that normally in nursing homes it's not possible for residents to go outside. But at Hogewey, she continues, "we've created a safe atmosphere and surroundings where people can just go outside and feel the rain on their head - not just see it through the window but actually feel it.”

One in every five Dutch people over the age of 65 suffers from Alzheimer's. It's the biggest healthcare cost in the country. Hogewey has been one of the government's biggest investments in this field: it provided over 10 million euros for its construction. It's believed to be the only dementia neighborhood in the world. But Switzerland has unveiled plans to build a similar project near Bern.

Searching for treatment for Alzheimer's

Alzheimer's is the most common form of dementia. The symptoms first show up when the disease has already reached an unstoppable stage. Although no effective medication has been found, science has reason to be hopeful. (06.02.2012)

In a DW interview, a Lund University scientist says his team has doubled the early detection period for Alzheimer's. He hopes this will lead to better therapies for patients, as they may be able to be started earlier. (05.01.2012)