3D printers can create almost anything these days, from eyeglasses and coffee mugs to working handguns. But now architects in Amsterdam are dreaming bigger. Much bigger. 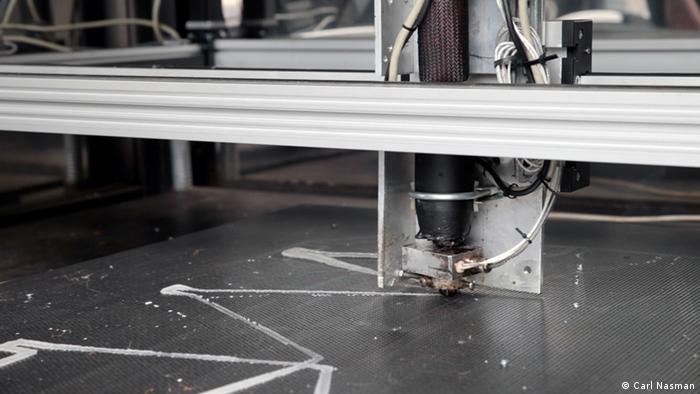 Two Dutch architecture firms, DUS Architects and Universe Architecture, are each hoping to be the first to print the world's first full-scale, inhabitable house.

"It's kind of Lego for adults," says Hans Vermeulen, one of three architects at DUS. But his plan is not child's play. He wants to print, piece by piece, a classic Dutch canal house, which will become an information center for 3D printing.

To do this, DUS has built its own 3D printer. They call it the "KamerMaker," or "Room Builder."

At six meters-tall, the shiny metal machine is one of the largest 3D printers in the world - it's nearly large enough to print an entire room. The KamerMaker sits in a garden outside the DUS office building, where dozens of tourists stop every day to watch it in action. 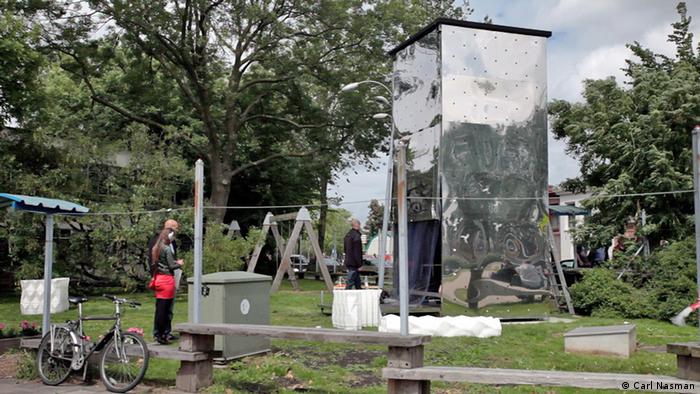 The KamerMaker is a popular attraction for tourists, who watch while it creates test pieces for a canal house

While 3D printing has been around since the 1980's, the technology has only recently been introduced to the field of architecture.

DUS began using a much smaller 3D printer five years ago to create models of its designs. Then last March the firm had an idea.

"We thought, OK, we are architects, we have to build a big one if we want to print a house," says Vermeulen.

Just like its smaller cousins, the KamerMaker can be programmed with a digital blueprint of a three dimensional object. It uses these instructions to print - horizontally and vertically - the programmed object. 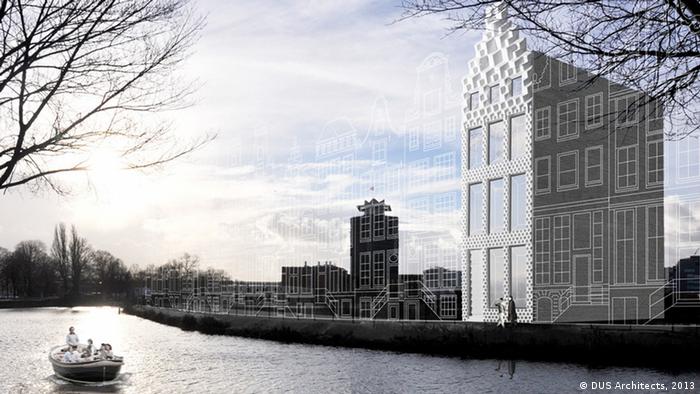 On the day DW visited DUS, the printer is slowly creating a test piece for the proposed canal house. Inside the machine, a long tube runs from the ceiling to a printer head, which moves slowly over the floor along a metal frame. Instead of ink, the printer lays down a thin layer of white, melted plastic. As the layer hardens, the printer retraces its steps, hundreds of times, building a solid plastic object, layer-by-layer over the course of a few hours.

"It's printing and it's working, but it's not yet working perfectly, it's not fast enough," says Vermeulen, who hopes the project will inspire new ideas about architecture and housing construction.

"That's also why we want to do it - to see what this technique actually can mean for housing seven billion people on this planet - because at the moment, with the current construction techniques and how we play with resources in this world, it's not sufficient enough."

Vermeulen and other proponents of 3D printing say the technology could be more ecologically friendly than traditional building techniques. 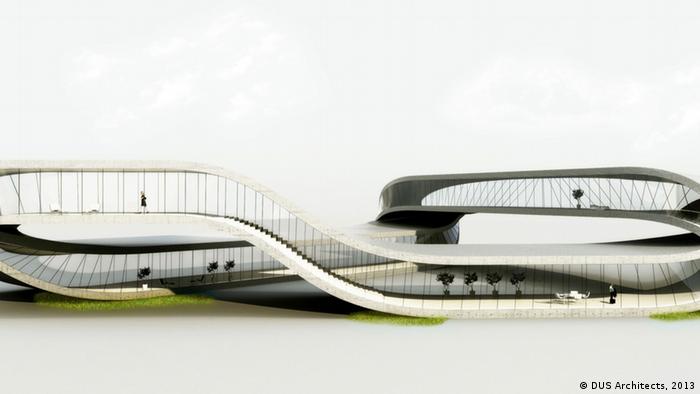 A plan of the Ruijssenaars designed Landscape House

For example, materials like wood and cement would no longer need to be transported to a construction site. There would be less waste - printers use only the necessary amount of raw material to create each design.

There is even talk of a printer that could be able to print solar panels directly into the structure of a house.

Houses made of plastic?

The KamerMaker currently prints with recycled plastic, but this may change.

"It's the material which works at the moment with this technique," Vermeulen explains. "We already printed with M.D.F. - wood chips with polymer - and it becomes wood. So you can sandpaper it and you can smell wood. You can come up with totally new materials in a new form."

Meanwhile in a third floor office in the center of Amsterdam another Dutch firm is planning to print a more abstract house. 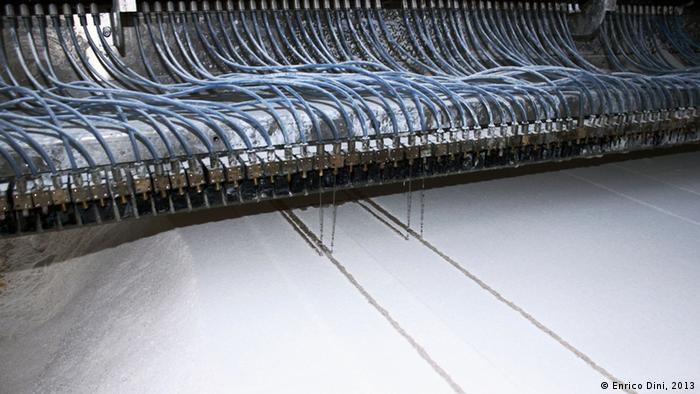 The Landscape House will be built "in one go" with Enrico Dini's 3D printer, the D-Shape

Ruijssenaars believes 3D printing is the best technique for building it.

"For the complex turns that we have in this design you would in a traditional way make molds of wood and then pour them with concrete and then later take away the wood," Ruijssenaars says. "It is a very time and energy consuming process. So, in the large scale, 3D printing was not only communicating infinity, but also a more direct way of actually printing the form you want."

The goal is to print the Landscape House in one go - without visible signs of a beginning or an end - to communicate its concept of infinity.

Ruijssenaars has contracted the services of Italian house printer Enrico Dini. Dini's machine, called the D-Shape, uses layers of sand and a liquid bonding agent to construct a design.

"It's sort of a miracle," Ruijssenaars says, "because you actually harden out grinded rock back into rock or sand into rock." 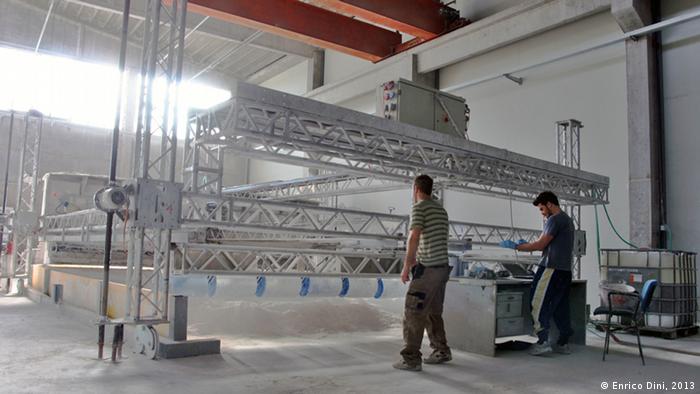 "You can imagine a really large printer head with hundreds of nozzles actually leaving a liquid, which is magnesium chloride, on a sheet of sand. So what happens is, if you do this layer-by-layer, you can directly print a form that you want and then in the end take away what you don't need. And it's very strong. This artificial rock is unbreakable," says Ruijssenaars.

Construction of the Landscape House is expected to begin in 2014, with costs estimated around 5 million euro ($6.7 million). However, Ruijssenaars thinks 3D printed houses are not just for the wealthy.

"We've been approached by a bank from South Africa to print houses for the poor," he says. "You could actually have the printer print a whole street in one go. This might become one of the larger applications of the technique."

DUS Architects will begin printing its design later this year along a canal in the north section of Amsterdam. If successful, both projects will set large-scale precedents for the future of 3D printing and architecture.

Until now, products printed using 3D have mostly been prototypes. But the technology can also be applied to serial production, and is set to revolutionize industry, the nature of production, and consumption. (26.12.2012)

Workshopping the future of 3D printing

Once only accessible in well-funded labs, 3D printers are getting cheaper and you can print the parts to build your own one at home. In Düsseldorf, tech enthusiasts are having a go. (06.11.2012)