Until now, products printed using 3D have mostly been prototypes. But the technology can also be applied to serial production, and is set to revolutionize industry, the nature of production, and consumption. 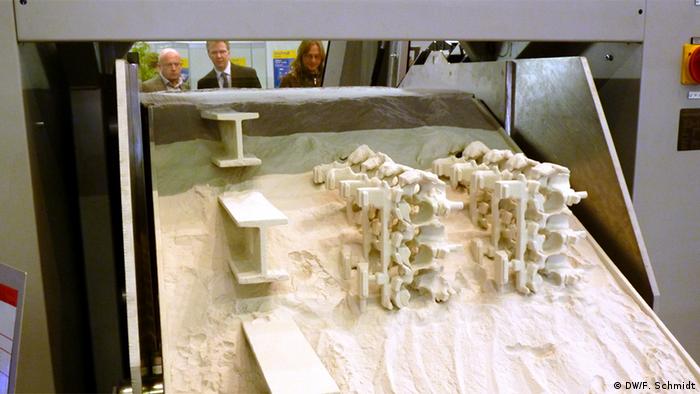 New components - T-girders and mechanical casings - sit in a heap of powder. The Voxeljet company is printing them using a 3D machine. On the other side of the powder mound, a slider moves back and forth. It's fitted with an extrusion head, like that of an ink-jet printer, which shoots an adhesive into the powder. This is the way components are manufactured using 3D technology: layer by layer.

The technology for printing components in 3D form has already been available for several years. Until now, it has mainly been used for manufacturing rare or expensive prototypes for the research and development departments of major companies. But the technology has advanced enough to be put to use elsewhere, and is now increasingly being used in serial production. The big advantage of this technique is that each component can still be different, even as part of a series.

The sky's the limit

All sorts of objects can be printed directly using 3D technology. The most common process involves selective laser melting (SLM), which works in a similar way to the adhesive process described above. First a laser beam fuses the contours of the object into an extremely thin layer of plastic and metal powder. Then the machine pushes fresh powder over it, and the laser melts on another layer. Layer for layer, a new component is created.

Other processes exist which do not require powder, and which are even more similar to an ink-jet printer: for example, a print head shooting melted plastic, layer for layer, onto a plate. 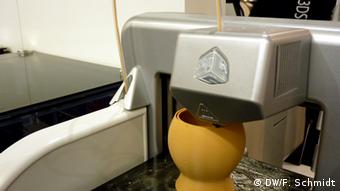 Printing a vase with liquid plastic

Such printers can manufacture more or less anything, as long as a computer model for it exists and the objects aren't larger than the printers themselves. Materials of all sorts can also be printed: plastics, alloys, even glass and ceramics. Metal components produced in this way are just as durable as those that are cast or forged. Furthermore, the manufacturing process creates no waste, as any leftover powder is simply reused.

Computer tomography can even be employed to make 3D images for the digital models. That's one reason why this technology is absolutely booming in the field of medicine. Each year, thousands of individual implants - such as cobalt-chrome knee replacements and titanium hip prostheses - are made using the technology.

The technology has made the leap to serial production primarily in the field of dental prostheses. Equipment manufacturers estimate that more than six million bridges and crowns are constructed each year using computer-controlled printers. Given the figures involved, this can clearly be described as serial production, yet each piece remains individual. "Dental prostheses are always one-of-a-kind; the lot size is always one," says Wilhelm Meiners, a selective laser melting (SLM) specialist at the Fraunhofer Institute for Laser Technology in Aachen. 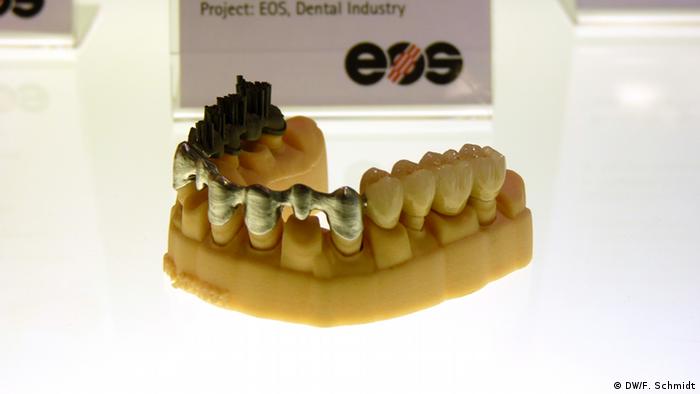 Just as dental crowns are custom-produced, yet in huge numbers, simple, everyday items could also be produced by printers in the future: custom-designed jewelry, handles and levers for a car, toy trains, or replacement parts for antiques and collectors' items. "There are whole new business models opening up," Meiners stresses.

In the future, end consumers could design their own models on computers and then send the files to manufacturers via the Internet. The objects would then be printed and sent back to customers. "This means that customers will be much more intensively involved in the product development process," says Meiners.

This is how the Shapeways company already works. Customers can access the required design software directly on the company's website.

Nikolai Zaepernick of the EOS company near Munich is enthusiastic that Shapeways has grown into a stable, mid-sized company. "Using our equipment, they produce thousands of parts each day," the businessman says. As paradoxical as it may sound, "each item is different, yet we can still call the process 'customized mass production," he says. 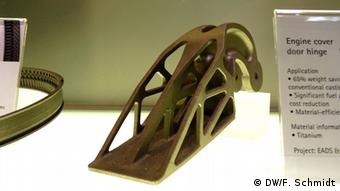 Hinge for an airplane door created with an SLM printer

But the technology faces one major hurdle: the printing process simply takes too long. It can take hours for a printer to create even the smallest objects, since the layers that compose them are exceedingly thin.

That's why researchers and manufacturers are working to improve the machines - for example, by using more intense lasers that can melt the powder faster. However, this is only possible when the materials can withstand the heat without evaporating. Where that doesn't work, manufacturers aim to use more laser heads simultaneously.

Picking up the pace

Another problem is that the SLM machines work in a single, closed process. "We turn the unit on, and then it runs and runs and runs, and is finished at some point," says Ingo Uckelmann of the research department of BEGO, a dental implant company. "We pull out all of the pieces at the same time from the powder." It can take up to 18 hours to get 400 new dental implants onto the work-bench, and then they all have to be reworked in a short amount of time.

It would be more efficient, Uckelmann says, if the implants came out of the machine one by one as each is finished, like on a conveyor belt. Then they could be reworked and sent back to customers more quickly. But this only works when the powder is slanted toward the construction platform, as in the Voxeljet VXC 800 pictured above. 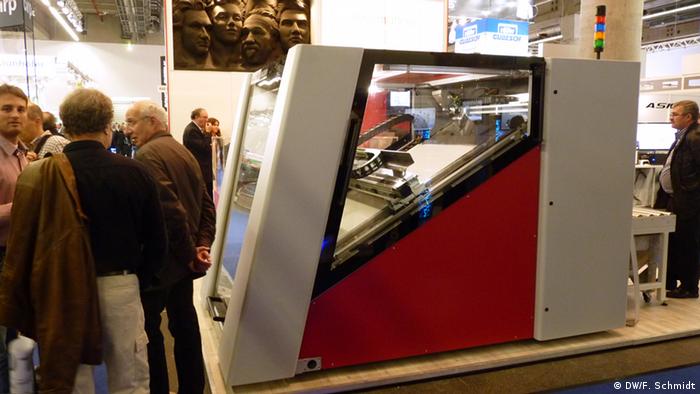 Printing components in this tilted position is then not only faster: "You can also manufacture products that are as long as you want them to be," Uckelmann explains. "Theoretically, I could print out a wing for an Airbus plane, provided I had a machine that was deep enough - that would be no problem."

Mass production using computer printers is set to revolutionize today's industrial landscape. But in order for this to happen, it's not only the speed of the machines that needs to be improved. Components need to be assembled or reworked once they come out of the printers - and scientists are still working on developing specialist robots for that job.

Workshopping the future of 3D printing

Once only accessible in well-funded labs, 3D printers are getting cheaper and you can print the parts to build your own one at home. In Düsseldorf, tech enthusiasts are having a go. (06.11.2012)

A woman in the Netherlands has been fitted with a lower jaw created by a 3D printing process. Doctors say it is the first operation of its kind and paves the way for more widespread use of printed implants. (08.02.2012)

Legal battles could soon emerge as digital sharing moves beyond copying media to taking files and transforming them into physical objects. (26.01.2012)