How do you illustrate the idea of Europe? A book project initiated by Gruffalo-creator Axel Scheffler collects 45 works of artists who feel the UK should not leave the EU.

Great Britain's scheduled Brexit day, March 29, is only a few weeks away, but many of Europe's artists and intellectuals are still struggling with the upcoming event.

"The fatal decision in favor of Brexit, with which the country —  it seems to me —  is massively damaging itself, fills me with incredulity, pain and anger," says Axel Scheffler. Though he was born in Hamburg, the creator of the children's book character "Gruffalo" has been living in London for almost three decades.

Scheffler invited illustrator colleagues to put down their own vision of Europe on paper. The resulting book, Drawing Europe Together, collects illustrations by 45 artists.

First published by Macmillan in Great Britain in November, the German version has just come out this month. Scheffler's illustration adorns the cover of the book, showing a group of animals traversing along and carrying their own coloring pencils. They on the march to a Europe that is growing together. 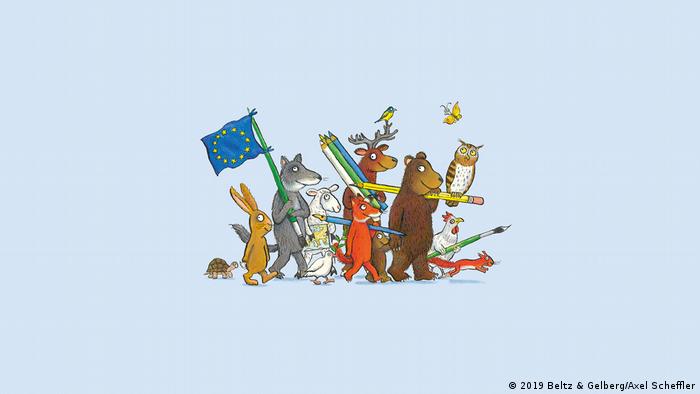 Illustrator Patrick George's vision of Europe is composed of a colorful kids' party with all sorts of different people babbling along together excitedly. It's only the British girl who is off to the side, floating away in the sky with her red balloon. She doesn't understand why she has to leave the party. "Following this ridiculous referendum, we're now looking at an uncertain future," the artist commented. George hails from Ramsgate, a seaside town in east Kent, England, where a large majority of the residents voted for Brexit.

Another poignant illustration is by Emily Gravett, a well-known British illustrator and children's book author.  It shows a British mouse sitting alone under a cheese dome nibbling on an old piece of cheese next to a large, lavishly laid-out cheese platter with the European Union flag stuck with a toothpick in an apple.

The book of illustrations and drawings about the EU was a brainchild of Markus Weber, of the Moritz children's book publishing company, while at the Frankfurt Book Fair in 2017. He suggested to Axel Scheffler that they get British illustrators on board. But the book is surely not just one for children. "Of course, it's a political book," Weber said. "The artists are depicting more than just little rabbits and bears." 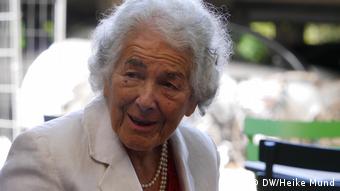 Like Scheffler, whose Gruffalo monster is familiar to German and British children alike, many of the illustrators are hopeful that Brexit will not actually come to pass. Scheffler was able to win over famous colleagues for the book project, including award-winning German children's and youth literature author and illustrator Jutta Bauer, as well as famous British writer and illustrator Judith Kerr, who hails from a German-Jewish emigrant family. She became famous in Great Britain with her illustrated stories about the tomcat Mog and the tiger who comes for tea.

"My great personal hope," Scheffler writes in his foreword, "is that it is not too late to change Britain's course out of the EU." And Judith Kerr, in the book, happily lets Tiger and Mog carry blue EU flags, accompanied by her own call: "Up Europe!"

"Gruffalo" made him famous worldwide. Illustrator Axel Scheffler shares his reaction to the outcome of the Brexit referendum with DW. (24.06.2016)

When the Theaterlabor Bielefeld launched its "Cafe Europa," there was no talk yet Great Britain leaving the EU. Now people involved in the cultural scene are wondering about what effect a Brexit would have on artists. (26.10.2018)