The United Nations Security Council has agreed on a draft resolution to endorse a Syrian peace process. The text makes no mention of the future of Syrian President Bashar al-Assad. 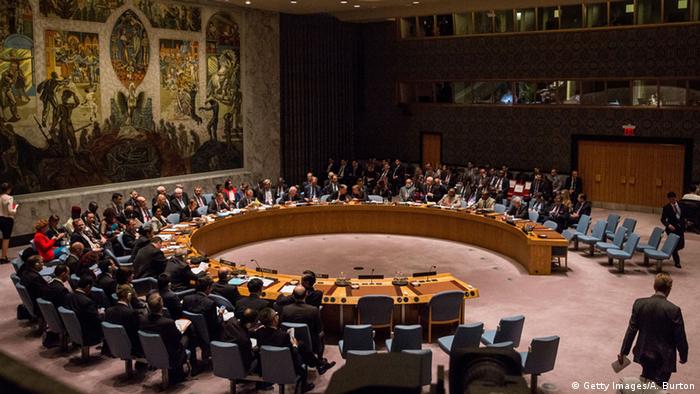 The resolution adopted on Friday does not mention one of the most contentious issues in efforts to forge a peace - the future role of Syrian President Bashar al Assad.

Diplomats had hurried to overcome sticking points in the draft resolution head of the Council meeting at the UN headquarters in New York.

The US ambassador to the United Nations, Samantha Power, phoned each of the remaining 10 members of the council to brief them on the text ahead of the vote.

The resolution is a rare gesture of unity from Security Council members on the Syria peace process.

Some 20 foreign ministers were involved in tackling deeply divisive issues, including which Syrian groups should be allowed to take part in peace talks.

Jordanian Foreign Minister Nasser Judeh said he had presented lists from each country of groups they considered were terrorist organizations. Some countries, he said, "sent 10, 15, 20 names" and others more.

Under the Vienna process, a six-month political transition period is envisaged once a ceasefire begins.

Rebels have demanded that Assad step down immediately, something that Assad and permanent Security Council member Russia have dismissed.

In his year-end news conference on Friday, President Barack Obama said Assad would have to quit office to bring about a satisfactory end to the civil war in Syria.

Obama: Assad must stand down

Obama said the crisis in Syria could have been easier to end if Assad had stepped down several years ago.

"I think that Assad is going to have to leave in order for the country to stop the blood(shed), for all the parties involved to be able to move forward in a nonsectarian way," Obama said.

"He has lost legitimacy in the eyes of the country."

More than 250,000 people have died since the Syria conflict flared up in March 2011, and millions more have left their homes.

Ahead of talks in New York on Syria's future, President Bashar al-Assad says the conflict could be over within a year. He restated his demand that the existing government be involved in the terrorist fightback. (18.12.2015)

The UN Security Council has unanimously approved new sanctions against the self-declared 'IS.' The UN is trying to block IS access to the purchase of oil equipment, weapons and communications. (17.12.2015)