Dozens of animals perish in German zoo fire | Germany | News and in-depth reporting from Berlin and beyond | DW | 13.11.2010

A host of domesticated animals have died in a blaze at a zoo in southern Germany. Zookeepers and firefighters were able to save the zoo's collection of elephants and hippos. 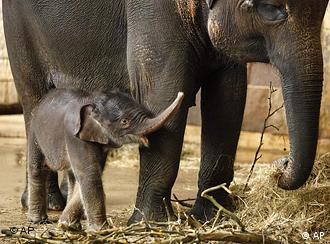 The zoo's elephants were saved by fire fighters

A fire ripped through a zoo in the southern German city of Karlsruhe early on Saturday, killing 26 animals and gutting several enclosures.

Zookeepers said they managed to lead their collection of elephants, flamingos and hippopotamuses to safety in a building some distance from the fire.

"The fire was already blazing over the heads of the elephants, so it was literally a last-second rescue," said fire chief Roland Goertz.

However, help arrived too late to save goats, sheep, ponies, lama and donkeys in an adjacent petting section.

"Our entire collection of domesticated animals has been lost," the zoo's chief Gisela von Hegel said.

Emergency authorities said around 100 firefighters had battled the flames in strong winds, which threatened to spread the blaze from wooden structures of the petting zoo to neighboring buildings.

Investigators are yet to determine the cause of the fire, which has caused hundreds of thousands of euros damage to the zoo's facilities.

A court in Berlin has asked two German zoos to reach an amicable agreement over price for Knut the polar bear. Knut became a household name in Germany as a cub in Berlin Zoo, but he's owned by a different zoo, for now. (20.05.2009)

A woman who jumped into the polar bear enclosure at the Berlin Zoo on Friday and was mauled by a bear -- which was not the famous Knut -- is currently recovering in the hospital. (10.04.2009)