Surprised polar bear mauls woman in Berlin Zoo | News and current affairs from Germany and around the world | DW | 10.04.2009

A woman who jumped into the polar bear enclosure at the Berlin Zoo on Friday and was mauled by a bear -- which was not the famous Knut -- is currently recovering in the hospital. 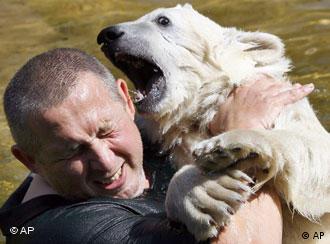 Polar bears have been known to be less than cuddly

When Germany started to go polar bear crazy back in 2006 with the birth of global superstar Knut, there were no warnings of the dangers of promoting a wild animal as a loveable, cuddly companion.

With every polar bear birth – from Flocke to Wilbaer – the possible psychological effects of the relentless merchandising campaigns and the highly lucrative "aah" factor went unaddressed.

Amid all the hype and hysteria, no-one spoke up to remind the enraptured public that these animals were supreme predators who, given time, would be more inclined to bite than to lick the hands that fed.

Eradicating the boundaries of common sense -- which kept polar bears firmly in the part of the brain marked 'potential killers' away from the part inhabited by Steiff toys and kittens -- may be to blame for the behavior of a German woman who leapt into the polar bear enclosure at Berlin Zoo on Friday.

Heiner Kloes, a zoo spokesman, told the DPA press agency that keepers pushed the bear away and pulled the woman out from the enclosure, which is surrounded by a fence, a line of prickly hedges and a wall, a comprehensive sign that getting in with the bears was not encouraged and one which suggests that the woman was very determined.

The woman was taken to a hospital for treatment. Her condition was not immediately known. Police did not say why she jumped in with the bear.

The bear responsible for the attack will not face any consequences.

"The woman has proved herself to be careless by jumping into the enclosure," a police spokesperson told the Associated Press. "Logic tells us that polar bears will do this type of thing in this situation."

A German who entered the lair of Berlin's star polar bear Knut on Monday told police later he had had the feeling Knut was sad and lonely. He was lucky to get out in one piece. (24.12.2008)

With his second birthday coming up this week, Germany's most famous polar bear is facing a move -- much to his fans' despair. It looks as if Berlin will be losing its brightest star: Knut. (02.12.2008)