A court in Berlin has asked two German zoos to reach an amicable agreement over price for Knut the polar bear. Knut became a household name in Germany as a cub in Berlin Zoo, but he's owned by a different zoo, for now. 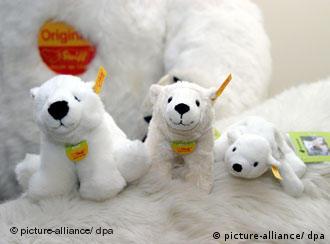 Neumuenster Zoo, which officially owns the 2-year-old polar bear Knut, wants 700,000 euros ($944,000) for Berlin's most famous bear. The Berlin Zoo, where Knut was raised and became famous, says it is only prepared to pay half that figure.

The Berlin court hearing on Tuesday did not resolve the dispute, although judge Philip Hegerman did suggest that Berlin might pay a little extra for such a renowned bear.

He gave both sides until July 13 to reach an agreement on price, saying that the court would make a deicision on September 1 if negotiations failed. 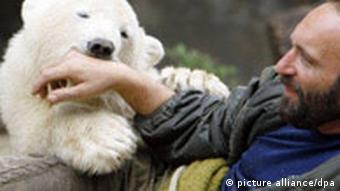 Knut as a cub with his keeper Thomas Doerflein. Together, they were a big hit

As a cuddly cub, Knut became a smash hit for the Berlin Zoo, where he was staying on loan from the north German Neumuenster Zoo, after being rejected by his Mother.

His image was reproduced on posters, books, stuffed toys, postage stamps and in a movie, and Berlin Zoo's ticket sales rose by 27% in 2007 whilst Knut was a cub.

These tickets alone brought in an estimated 6.8 million euros in extra revenue for Berlin's zoo. Neumuenster Zoo asked Berlin to publish the total royalty earnings it had made thanks to Knut before naming a fair price for the polar bear, but Berlin Zoo had instead offered a pair of penguins to make amends.

It seems that polar bear cubs are a little like London buses: you can wait for ages for one to come along and then three turn up at once. (03.03.2008)