Dozens have died after a fire broke out in a beach sandal factory close to Manila. None of the nearly 65 workers stranded in the building managed to escape. 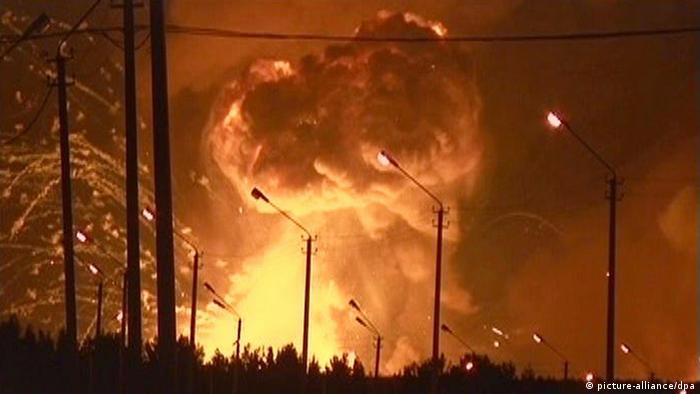 A beach sandal factory in Manila caught fire on Wednesday, possibly killing dozens of workers who were unable to escape the building. Fire officials managed to put out the flames more than five hours after it had started and casualties could not be avoided.

"I was talking to the bureau of fire protection and they said no one survived," Mayor Rex Gatchalian of Valenzuela city north of Manila told the crowd that had gathered outside the factory. "But please check there is a chance if your relatives were able to get out, maybe they were able to jump from the wall and have gone home. Call them please," he added.

Three bodies have been recovered and only seven people managed to escape, according to the mayor. Thirty-nine workers had been accounted for, but 65 were still missing, suggesting that the death count could be much higher.

Firefighters had stopped trying to retrieve bodies of victims because the structure was unstable. Engineers were working to make the structure secure enough for search operations to resume.

"Our investigators have to clear the debris first before we can give an official body count," Bureau of Fire Protection chief Ariel Barayuga said, describing the scene of the fire as "hot" and "thick with smoke."

More than 200 people worked in the factory, according to owner, Veato Ang. The fire was probably ignited by sparks from wielding works in front of the factory's main entrance door, which caused the highly flammable chemicals used to make the sandals explode, Gatchalian told journalists.

"By the time they realized that they could pass through the main door, the flames were already engulfing the front area," the mayor said, adding that the employees thought they would be safe in the building's second floor. Radio stations also reported some relatives receiving text messages from the workers saying they were on the second floor, but contact was broken shortly after.

Fire officials said the building had fire exits, but that workers could have been overwhelmed by the thick black smoke from burning chemicals and rubber.

Fires are common in the Philippines, where fire safety regulations are very lax. The deadliest such incident in Manila happened in 1996 when a disco in Manila caught fire, killing over 160 people. Persons held responsible for the blaze were sentenced to prison only last year.

A cement factory under construction has collapsed in Bangladesh. Police say 150 people had been on site. At least four people have been confirmed killed. Emergency services had managed to rescue at least 30. (12.03.2015)

Typhoon Haiyan is one of the deadliest natural disasters ever to hit the Philippines. But it’s far from the only one - the Southeast Asian country is located in an area that has been struck by a number of major storms. (10.11.2013)