A comfortable Borussia Dortmund lead almost evaporated at the death in Augsburg, but Jürgen Klopp's side managed to score their first points of the Bundesliga season. Prior to the late implosion, several BVB stars shone. 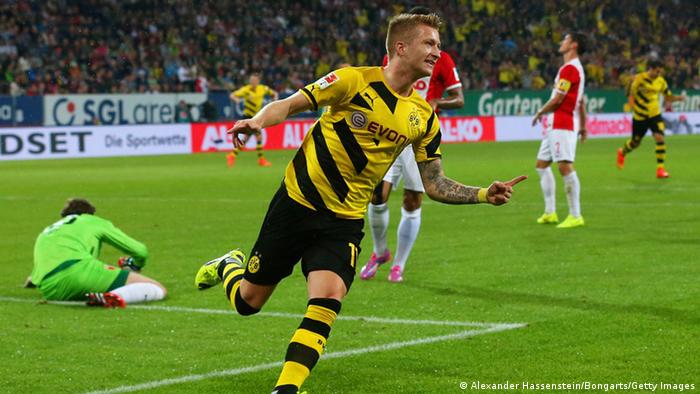 After the chastening defeat to pretenders Bayer Leverkusen on opening weekend, Borussia Dortmund came out of the blocks like wounded animals on Friday in Augsburg. Jürgen Klopp also elected not to play any of his summer signings, favoring Pierre-Emerick Aubameyang up front over Ciro Immobile and Adrian Ramos.

Several early chances ultimately told in the 11th minute, when a Marco Reus one-two with Kevin Grosskreutz cut the Augsburg defense apart. The German international, still recovering from the injury that kept him out of the World Cup, rounded the last man with his first touch and finished low with his left with his second. 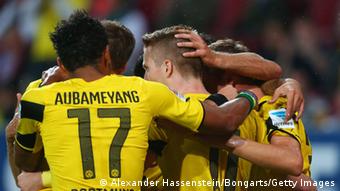 Some three minutes later Reus turned provider, looping in a corner headed home by central defender Sokratis. BVB shone for much of the first half, with attacking midfielder Henrikh Mkhitaryan bamboozling Augsburg's back line with his dribbling on what seemed like a dozen occasions.

Aubameyang had perhaps the better chance to stretch the lead, but Augsburg keeper Marwin Hitz - fresh from his first ever call-up to the Swiss squad - was equal to the remaining first-half efforts.

Ramos off the mark off the bench

Augsburg started the second half more strongly, but rarely managed to break through the Dortmund defensive line. The shots they could created tended to be from long range and inaccurate, with two such efforts coming in quick succession form Markus Feulner and Halil Altintop.

Around 10 minutes into the second period, Dortmund reminded their hosts about the gulf in quality between the two sides: Marco Reus' delicious pass released Kevin Grosskreutz, who crossed to the near post from the left wing. Aubameyang's impossibly acrobatic volley just missed the mark, as BVB came within inches of a quality team goal. 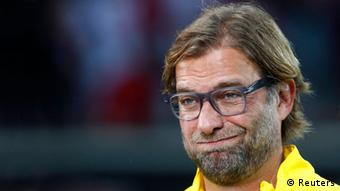 Klopp watched a comfy win turn into a tense finale

Overall, however, the pace of the game suffered with the favorites comfortably ahead. When substitute Ramos gobbled up the rebound following a parried Mkhitaryan shot, making the score 3-0, the match appeared to be over. It was the Colombian international's first goal in the Bundesliga for his new club, having moved from Hertha Berlin in the off-season.

In the last 10 minutes, Augsburg suddenly provided coach Klopp with food for thought - pulling two goals back in a hurry and then threatening to equalize in the dying moments. Two substitute strikers, Raul Bobadilla and Tim Matavz, did the damage, both netting from close range against a disjointed back line.

Despite Klopp's visible dissatisfaction in the dugout, Dortmund hung on to claim their first points of the season and lift themselves out of the Bundesliga relegation zone - most likely never to return this season.

Augsburg, however, remain in the drop zone with no points from their opening two games. Hoffenheim, many pundits' dark horses for a strong 2014/15 campaign, bettered Markus Weinzierl's side 2-0 last weekend.