Speaking at Mt. Rushmore, US President Donald Trump decried "cancel culture" and threatened sharp punishments for those defacing monuments. Thousands of people gathered at the site despite coronavirus concerns.

The United States is "witnessing a merciless campaign to wipe out our history, defame our heroes, erase our values, indoctrinate our children," President Donald Trump said in a speech delivered on Friday evening at Mt. Rushmore, a rock massif that features likenesses of four US presidents. The faces of George Washington, Thomas Jefferson, Theodore Roosevelt and Abraham Lincoln were carved into the mountain in the 1920s, with each of the heads nearly 18.3 meters (60 feet) high.

"This monument will never be desecrated, these heroes will never be defaced ... their achievements will never be forgotten and Mt. Rushmore will stand forever," Trump said, referencing the recent toppling or destroying statues associated with colonialism and racial discrimination.

"This attack on our liberty must be stopped, and it will be stopped," the president added.

"In our schools, our newsrooms and even our boardrooms, there is a new far-left fascism," he said. "That is why I am deploying federal law enforcement to protect our monuments, arrest the rioters, and prosecute the offenders to the full extent of the law."

"We will never abolish the police," he said, in another reference to an idea that came in response to recent instances of police brutality.

Trump also said the US will build a new memorial park, featuring statues of "the greatest Americans who ever lived."

A crowd of several thousand people greeted Trump for the speech, ignoring the risk of coronavirus spread. State authorities have made face masks available but not mandatory for those attending the rally. Images from the scene showed nearly all audience members foregoing the measure. Trump himself did not wear a mask. The audience was not required to socially distance.

South Dakota Governor Kristi Noem, who also spoke at the event, said that the removal of the past was being done "deliberately" in order to destroy the founding principles of the US.

"Let us not destroy history - let us learn from it," she said. 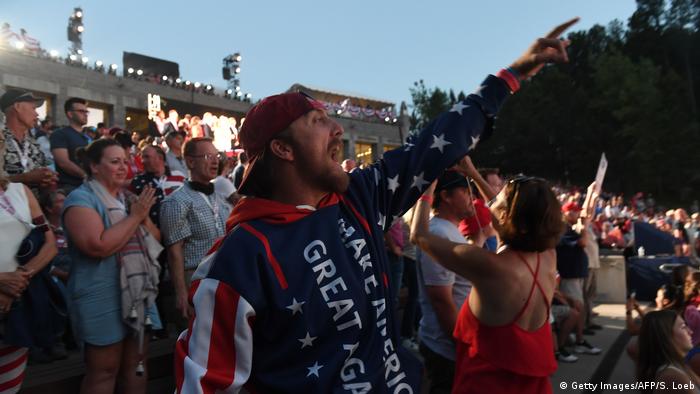 The event is set to culminate with a fireworks display on the eve of the US Independence Day. The authorities had halted the practice in 2009 due to the risk of forest fires and pollution in the wooded Black Hills region. Trump, however, successfully pushed to resume the use of fireworks this year, promising "a fireworks display like few people have seen" ahead of his visit to the South Dakota monument.

Experts have warned that dry weather has increased the wildfire threat.

"The Black Hills generally is a tinder box this time of year, and right now, they're in a drought," wildfire expert and Black Hills resident Bill Gabbert told National Public Radio earlier this week.

Trump 'needs to open his eyes'

Native Americans also criticized the US president for staging the rally on the land of their forefathers.

"The president needs to open his eyes," said elder Hehakaho Waste of the Oglala Sioux tribe. "We're people too and it was our land first."

The US government had promised the land around Mt. Rushmore to the Sioux people in an 1868 agreement but seized the land within the decade despite the document.

The US awaits its biggest political holiday, July 4, while shaken by the twin crisis of the pandemic and the protest movement triggered by the killing of George Floyd by police in Minnesota some five weeks ago. Trump is due to return to Washington DC for a larger celebration on Saturday.