US President Donald Trump has denied asking why the US allows immigration from "s***hole countries," but admitted the language he used was "tough." The UN and African Union are among those to slam the reported remarks. 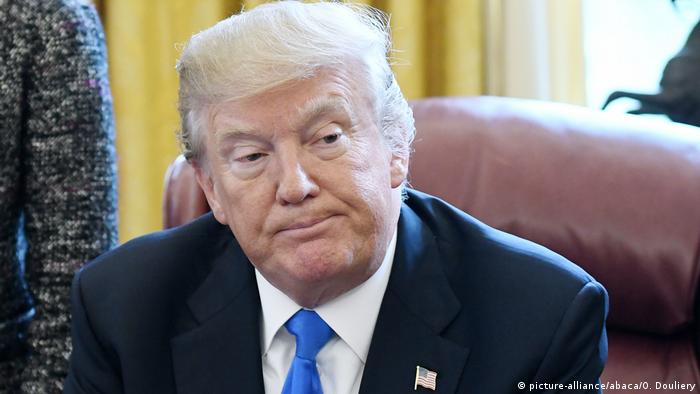 US President Donald Trump denied on Friday that he used a vulgar phrase as he was briefed on a bipartisan immigration plan at a meeting on Thursday, which would affect migrants from Africa, Haiti, and some Latin American nations.

According to several sources, the president asked the lawmakers present at the immgration meeting in the Oval Office, "Why are we having all these people from s***hole countries come here?"

He then allegedly suggested the US should take in more people from countries like Norway, according to the Washington Post. Trump met Norwegian Prime Minister Erna Solberg on the day before.

Trump was meeting with Republican Senator Lindsey Graham and Democrat lawmaker Dick Durbin, and other officials and lawmakers, to discuss an immigration plan on the fate of people who came to the US as children or fleeing natural disasters. The preliminary document is being worked out by a bipartisan group of six senators, and would also involve Trump's request for $1.6 billion (€1.3 billion) to build the first section of his wall on the border with Mexico. Trump rejected the proposal on Thursday.

Other sources cited by the AP news agency also confirmed the Thursday report. All of the sources spoke on condition of anonymity.

When asked for comment, White House spokesman Raj Shah did not deny Trump making the remarks about Africa and Haiti.

Republican congresswoman Mia Love of Utah, the only Haitian-American in the US legislature, called for Trump to apologize for his "unacceptable" behavior.

"The president’[s] comments are unkind, divisive, elitist, and fly in the face of our nation’s values," Love was quoted by the Salt Lake Tribune as saying. "This behavior is unacceptable from the leader of our nation."

Love said her parents, who emigrated from Haiti, "never took a thing from our federal government. They work hard, paid taxes, and rose from nothing to take care of and provide opportunities for their children."

"If confirmed, these are shocking and shameful comments from the president of the United States. Sorry, but there is no other word one can use but 'racist'," Colville told reporters in Geneva.

Previously, the Trump administration announced it would end a temporary residency program that allows nearly 60,000 Haitians to live in the US. The White House is also pushing for a deal on the so-called "Dreamers" children brought to the US illegally by their parents — who are protected from deportation under the act dubbed Action for Childhood Arrivals, or DACA.

Ebba Kalondo, a spokeswoman for the AU, said the remarks were "hurtful" and broke with "accepted behavior and practice."

"Given the historical reality of how many Africans arrived in the United States as slaves, this statement flies in the face of all accepted behavior and practice," Kalondo said. "This is particularly surprising as the United States of America remains a global example of how migration gave birth to a nation built on strong values of diversity and opportunity."

The strongest rebuke came from Botswana's government, which in a statement condemned the comments as "reprehensible and racist." It added that it had summoned the US ambassador in order to clarify whether its nations should be regarded as a s***hole after years of cordial relations.

Trump's first year: Beyond all reason?

Heads of government around the world hope that new US President Joe Biden will cooperate to tackle global issues, lift sanctions and improve bilateral relations.