Does the Berlin Wall belong in the trash?

Parts of the Berlin Wall still stand as a memorial in Berlin, as well as in over 140 locations worldwide. DW unexpectedly discovered many more in a less commemorative location - a waste sorting plant. 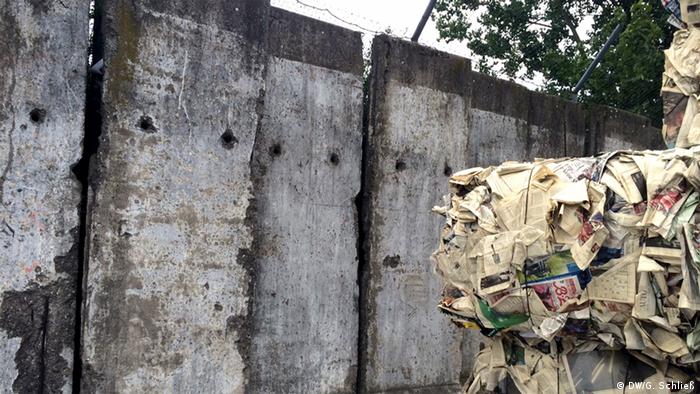 A few remaining pieces of the Berlin Wall are still standing in commemoration of the division that was constructed 55 years ago, on August 13, 1961.

No one could have imagined that other parts of it were resting in the middle of a dump. DW reporter Gero Schliess unexpectedly discovered sections of the Wall at a landfill in Berlin, run by one of Germany's biggest waste sorting and recycling companies, Alba. The slabs of concrete were being used there to separate different kinds of waste. 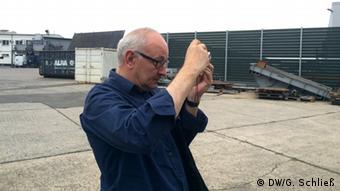 Even the Berlin Wall expert Gerhard Sälter, historian for the Berlin Wall Memorial, did not know this. Asked by DW to examine the concrete dividers at the landfill, he confirmed that most of the over 300 wall segments "were originally from the Berlin Wall."

Among the criteria to determine their authenticity is their height (3.6 meters - almost 12 feet) and the decay along the top edges, which used to hold round asbestos liners.

The other wall sections found at the Alba landfill were not part of the Berlin Wall, according to Sälter. He says that this format was quite common in East Germany. The concrete dividers were used in agriculture, for example, to store crops in different sections - just like the waste sorting plant still does. 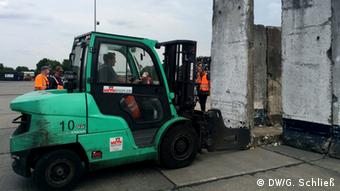 Alba's managing director, Uwe Küber, told DW how the Berlin Wall ended up in the landfill. Along with other companies, Alba was commissioned to remove the 155-kilometer-long (almost 100-mile-long) Berlin Wall after it was peacefully opened on November 9, 1989.

"I was there when we unloaded these wall segments here," Küber said. Instead of shredding them in order to use the material for building projects like other companies did, Alba simply left them standing on their site. These dividers still form temporary storage spaces for recyclable materials, such as plastic and metal. 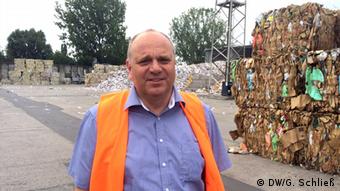 Alba's garbage disposal site in Berlin is considered to be one of the most modern of its kind in Germany. The plant deals with the trash produced by some seven million people in Berlin and its suburbs. That's over 140,000 tons of recyclable material each year, which needs to be separated and stored until it is further processed.

Germans were fed up with the Wall

Even though he didn't know about it, Gerhard Sälter wasn't surprised to find out that some Berlin Wall segments had landed at the Alba garbage disposal plant. When it was taken down in 1990, the Wall didn't have any particular value to the population, he says.

"East and West Berliners, from politicians to ordinary citizens, all agreed on one aspect: They wanted to get rid of the Wall. So I'm not surprised at all that it ended up at places like this landfill," Sälter explained. 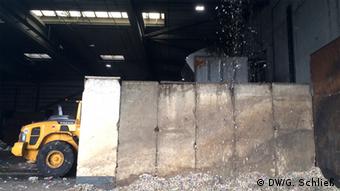 Recycling right by the Berlin Wall

After tens of thousands of people celebrated the Fall of the Berlin Wall on November 9, 1989, different sections were spontaneously knocked down to open up the borders between East and West Berlin.

Then, on December 29, 1989, the transitional East German government led by Hans Modrow officially decided that the Wall should be demolished. It fulfilled the expectations of the majority.

During a speech he held on November 10, 1989, former Chancellor Willy Brandt was one of the rare public voices to call for the historical preservation of some parts of the Berlin Wall.

For many people, remains of the Berlin Wall commemorate the victims of the Cold War while symbolizing the freedom Germans obtained by bringing it down.

Despite his commemoration work at the Berlin Wall Memorial, Gerhard Sälter is not troubled by the fact that other sections landed in a junkyard. These wall segments should not be considered sacred, at the risk of otherwise adding to the mystique of the East German authoritarian system.

"I do not find this disrespectful at all. Many Germans believed this is where the Wall belonged even before 1989," said Sälter. "That's why I think it's very appropriate to have the Wall in the trash." 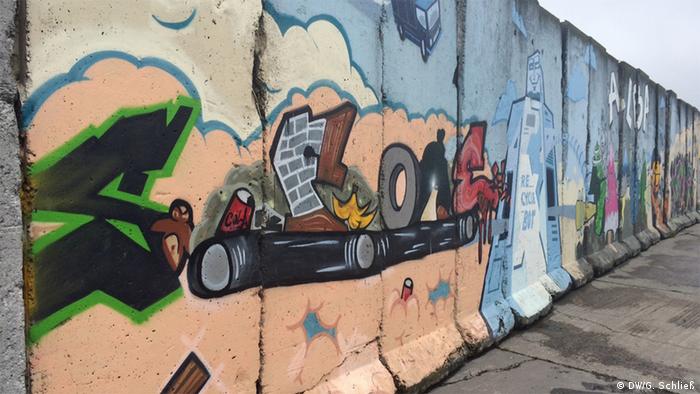 Alba's director, Uwe Küber, does not plan to change this in the near future. He knows that he is holding on to a historical "treasure." Small pieces of the Berlin Wall are collected worldwide. Single segments of the Wall are currently being sold for over 10,000 euros (over $11,000).

"We will keep using the parts of the Wall and wait for a while until they become even more valuable," he said. "Then, when the right time comes, we'll sell them for a good price."

Berlin Wall found in the trash

Berlin celebrates the power of techno as the Tresor turns 25

Serious partying established Berlin's clubbing reputation in the 90s: Techno was the sound of reuniting East and West Germany. Now the cult club Tresor turns 25 - and electronic music is more popular than ever. (21.07.2016)

Concrete, separation, death - that's what comes to mind when thinking about the Berlin Wall. But a new exhibition presents the border between the two former German states from a different view - that of the guards. (31.05.2016)

The new exhibition "Unveiled. Berlin and its monuments" shows statues that were kept hidden from the public for ages. As symbols of Germany's troubled history, they can now tell their story once more. (28.04.2016)