Dodi Lukebakio the latest example of how beneficial a Bundesliga move can be | Sports | German football and major international sports news | DW | 19.12.2018

Four goals in two games against Germany's top two teams later, and Dodi Lukebakio's value is skyrocketing. The 21-year-old is yet another example of how benefical a loan spell abroad can be. 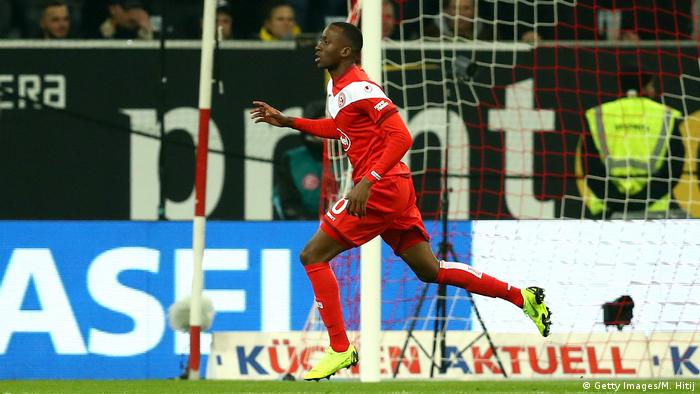 Not long after netting the first ever Bundesliga hat trick past Manuel Neuer, Dodi Lukebakio scored a goal to end Borussia Dortmund's undefeated run. In just under a month, football's unrelenting hype train swept him up and suddenly Lukebakio was hot property and undoubtedly the most valuable player in the current Fortuna Düsseldorf squad.

The 21-year-old's pace is striking. As high as both Bayern and Dortmund's back lines were, Lukebakio glided through both, even when  the defense had a head start. The 187cm Belgian is also surprisingly agile for his height, which combined with his impressive composure in front of goal makes for an impactful combination. Lukebakio already has a career-best 11 goals in 16 games this season.

This is the Belgian's breakout moment, although at the beginning of the year that moment looked like it would come in different colors. Off the back of a 19-game six months on the right wing for RSC Charleroi, Lukebakio joined Watford at the start of 2018. In an all-too familiar tale though, the youngster struggled having been thrown in the deep end. One brief substitute appearance later and the Lukebakio's career rapid rise was put on hold. Enter the Bundesliga.

Lukebakio's move to Fortuna Düsseldorf has proved the masterstroke of his still young career. The 21-year-old has restored his confidence and developed his game through first-team playing time. Perhaps most importantly, as a key member of the team, he is also learning about responsibility. A lack of sportsmanship in a 3-1 defeat to Werder Bremen at the start of December saw him benched the following week. The attacker held on to the ball after scoring a penalty, shoving off Bremen players who tried to take the ball from him. His regular attempts to win free kicks left the Bremen crowd incensed. Head coach Friedhelm Funkel was not happy, and called on Lukebakio to be more receptive to criticism. It is a lesson he must learn, but he is getting the chance to learn.

He is yet another example of how beneficial a move abroad can be for a young player and a young man - and he's not alone. 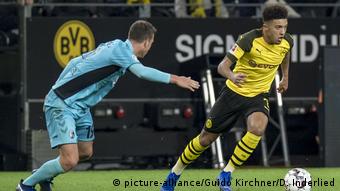 Jadon Sancho is another player who has has excelled this season

Jadon Sancho's talent has exploded at Borussia Dortmund, with the teenager's jinking runs leaving England fans in awe at the likes of a player they perhaps haven't seen since John Barnes. Reiss Nelson has shown his goalscoring touch at Hoffenheim. Hertha Berlin's Javairo Dilrosun left Manchester City to play first team football - and has looked so exciting for Hertha in such a short time that he won his first cap for the Netherlands in November this year. Before his injury, Liverpool's Marko Grujic also showed his quality in the capital. The list goes on, and Lukebakio is just the latest addition.

While some might suggest smaller clubs like Fortuna are losing out because Lukebakio is only on loan and will likely return to Watford at the end of the season. When he does though, he might have scored enough goals for Fortuna to secure safety - which would bring joy to their fans and obvious financial benefit to the club.

The benefits of a move abroad beyond the pitch are many for a player, but not always for the many. But if foreign food, strange languages and living away from family is a sticking point for some, more game time isn't. Playing in a first team is not only the best way to be a better footballer, but it also means so much more to those involved. Sancho and Nelson swapped League Cup appearances for domestic and European games in exciting teams. Lukebakio is now scoring against Germany's two big clubs. For many, the risks have already paid off and the learning has long begun.