Do you need a robot to get to sleep?

A Dutch entrepreneur has created a robot which is supposed to help you get a good night's sleep. It mimics the breathing of a baby to get you to drift off. But does it actually work? 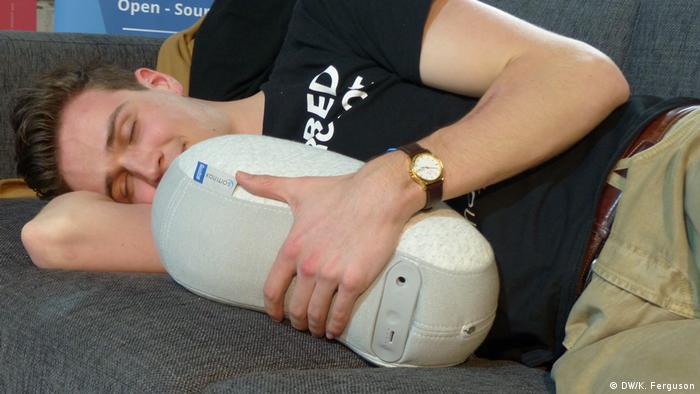 Did you sleep well? If not, you're not alone.

Studies suggest one in three of us aren't getting enough shut-eye. A 24-hour work culture, as well as all those hours spent in front of a screen, have caused an epidemic of sleeplessness to sweep across populations.

Perhaps a robot could help.

Dutch entrepreneur and robotics graduate Julian Jagtenberg (pictured above) has created a companion that promises to help you get a decent night's sleep.

It's soft, weighs about as much as a cat and breathes like a baby.

The idea came to him three years ago when his mother was suffering from chronic insomnia. Frustrated that her doctors were only offering her sleeping pills, he set about finding a solution.

"I challenged myself to create a robot that would help my mom to sleep better," he said.

He began looking into the literature on sleep and discovered that breathing and audio are two factors that can induce sleep.

One research paper in particular piqued his interest. "If you hold a baby, you subconsciously replicate its breathing and heart rate. It's a magical thing."

He employed this principle to develop a prototype robot that mimicked the sensation of slow and deep breathing. But when he presented it to his mother, she was less than impressed.

"She hated it because it made mechanical noises," said Jagtenberg. He made another few quieter models, but they were too big and heavy. Eventually though, he hit upon gold.

"At one point she said, 'wait, this is actually helping me now.'"

Keen to develop the idea, Jagtenberg built up a team of robotics engineers connected to the institute where they'd studied.

"We had no intention of starting a business. It was really just to put our skills to the test."

But after the team published an academic paper on the subject of sleep, interest in the robot began to grow. It wasn't long before the young graduates were being approached by people with sleep disorders. And so the Somnox company was born.

At the end of 2017, they raised funds via a Kickstarter campaign, and with the proceeds they were able to begin production.

"We start shipping next week," said Jagtenberg, who has received around 1,000 orders so far. 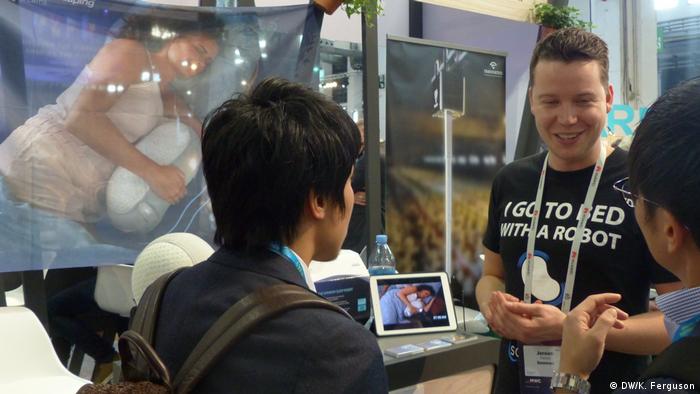 The cushion-like robot uses simulated breathing techniques to mimic the process of going to sleep. When you hold it against your chest, it feels a bit like holding a dog or a cat.

The idea is that when you snuggle up to it, you subconsciously fall into the same breathing pattern.

A speaker inside allows you to listen to a recording to get you in the mood for sleep. This can be anything from a guided meditation to a political broadcast. You can monitor your preferences using an app.

Based on your breathing and movement, the robot senses when you have got to sleep and turns itself off.

While interest in the sleeping robot has been big, so far there's not much more than anecdotal evidence to suggest that it actually works.

A clinical trial is planned. To date, testing has been limited to a trial of some 90 users. The result of the amateur study showed a 30 percent reduction in the amount of time it took to get to sleep. But without clinical conditions in place, that figure should be taken with more than a pinch of salt.

"It could very well be a placebo. I'm totally open to that," said Jagtenberg. "It's not about a number. It's about how you feel in the morning."

The company is planning to use machine learning to further customize the robot to its owner. This would enable it to detect sleep patterns and take preventative action to stop you from waking up at an inopportune time in the sleep cycle. Another possible function would be to detect movement patterns associated with poor sleep or nightmares.

If you're hoping to snuggle up to a robot sleeping companion of your own, prepare to fork out €549 ($623). "It's really expensive to make," said Jagtenberg, who is hoping for strong sales to offset the three years of research and development he has put into the product.

"It will take quite some time to become a profitable company," he said.

Isn't that something that keeps him up at night?

"Right now, I'm super stressed out," he admitted. "Will this be my greatest failure or my greatest success?"

A question it's probably best to sleep on.