German abstract artist Gerhard Richter's four-part Holocaust painting series is about to go on display this weekend in the city of Baden-Baden. The exhibit has attracted its share of controversy.

Now 83, Gerhard Richter painted "Birkenau" in 2014, drawing on photographs that a Jewish prisoner had taken secretly in Auschwitz-Birkenau in 1944. The atrocities originally depicted in the photographs are not visible in Richter's work. He painted over them in black, red, green and grey hues. More than 1 million people died at the Nazi death camp, the majority of whom were Jews. 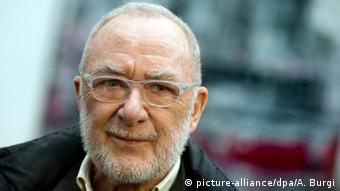 Richter's art is some of Germany's most expensive

"Birkenau" is Richter's first work to explore the Nazi terror. The artist says he took an interest in the Holocaust early on. In the 1960s, he began collecting photos that documented the genocide.

Critics say the paintings merely depict - and therefore glorify - the horrors of the Holocaust despite the layers of abstraction hiding the original photographs.

"Birkenau" will be shown alongside other works by Richter and other artists at the Museum Frieder Burda until May. Richter is one of Germany's leading artists, and his works fetch a premium at sales.

Gerhard Richter, one of the world's most important contemporary artists, allows us into his studio and gives us a unique insight into the personal and intense creative processes behind his art. (14.02.2015)