Dissatisfaction and anticipation in London as UK counts votes | Europe | News and current affairs from around the continent | DW | 07.05.2015

Dissatisfaction and anticipation in London as UK counts votes

Many expect a long wait when it comes to determining the true outcome and implications of Thursday's polls in the UK. DW's Samira Shackle listens to people's frustrations and hopes as the country counts its votes. 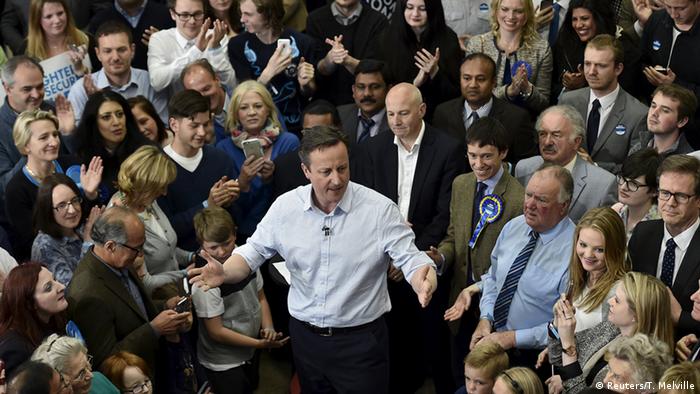 The Red Lion pub, a stone's throw from London's key political institutions, is full of people eagerly awaiting the results of the most uncertain election in Britain's history. A large TV screen hangs in the ground floor bar, while people crowd around to watch the coverage.

This campaign has been defined by its unpredictability. For most of its history, Britain has been a two-party system, with power swapped between Labour and the Conservatives. When the 2010 election delivered a hung parliament, and a Conservative-Liberal Democrat coalition, analysts hailed the end of that pattern. Initial exit polls supported pundits' views that no party is likely to win an outright majority. This is due to the increased prominence of smaller parties. The UK Independence Party (UKIP), which advocates withdrawal from the European Union, has steadily increased its profile, while the Green Party, which gained its first MP in the 2010 election, has also stepped into the public eye. The Scottish referendum earlier this year put the Scottish National Party (SNP) at center stage, and to a lesser extent, the Welsh party, Plaid Cymru.

"It's hard to feel excited about this election when it looks like all roads will lead to minority government or another coalition where we have no direct say over the formation of it," says Edwina Kelly, who works in finance. "For the economy's sake I would like to see a Conservative majority. I want to see the deficit continue to reduce and think that a Labour government - with or without the SNP - will undo a lot of benefits the economy has seen as a result of the last five years of austerity. That said, I'm worried about the impact of a referendum on EU membership, which is an unnecessary and dangerous distraction."

Like many out in London's pubs this evening, Kelly says she is not planning to stay up all night for the results. "I always have in the past, but I suspect the more interesting conclusion will come in the weeks after."

Hoping for 'a wake-up call'

Max Goldman, a charity worker, is spending the evening at the Donmar Theatre in London, watching a live drama about polling day. "I am worried that the UK will suffer as a result of the confusion likely to occur from no single party getting a majority of the vote," he says. "But perhaps some good will come from the chaos. Our constituency boundaries are out of date, our voting system is unfair, and there are big constitutional questions about the relationship between England, Northern Ireland, Wales and Scotland. In calmer times people have been reluctant to address these things, but if this election serves to highlight just how broken our democratic system is, perhaps that will force positive change."

Like Edwina, Goldman is not planning to watch the final count: "It seems likely that a government will take days or weeks to form, so there's no point losing sleep."

But other Londoners are planning to stay up all night. "I'll be in my office, doing a mixture of drinking both beer and coffee through the night, with occasional naps til the results start pouring in around 4am," says Will Callaghan, an activist. "I'll be dancing on the street if Nick Clegg [Liberal Democrat leader] loses his seat, and whooping and cheering if Nigel Farage [Ukip leader] fails to win in South Thanet. That is my single greatest hope for the evening. Overall, I'm excited about the election because I think the ensuing chaos could be a bit of a wake-up call."

Many people are dissatisfied by this election campaign, and with the political system as a whole.

"Election time this time round is an ambivalent and undemocratic feeling: a disbelieving hope that this is the one day in five years we might have some power to derail austerity and the attempts to dismantle welfare, the NHS, and all that is good about the UK," says Dunya Kalantery, a gallery curator. "I really hope that Labour gains enough votes to form a coalition; I am voting Green; I think the Tories will win."

Not far from the Red Lion, there's another sign of people's dissatisfaction. An Occupy Democracy protest camp is set up down the road. A small band of activists have been here for the last 10 days, calling for major constitutional reform, including a proportional voting system. This week, the square in the heart of London's political district has been home to talks, debates, and stand-up comedy.

"A Labour-led government will be preferable to a Conservative-led one, but neither one represents a real choice for the British people," says Phil England, an organizer with Occupy. "Whoever gets in we will continue to see laws and policies being made that benefit the already rich until we have a revolution in the way our democracy is run."

Many may say they're feeling disillusioned and apprehensive, but voters elsewhere in the UK are excited about the new opportunities afforded by the shift away from two-party politics.

"The election has been very exciting in Scotland as it feels like the whole country has become very engaged and empowered by our independence referendum earlier this year," says journalist Caroline Flyn. "I hope the SNP have a lot of success - which looks likely - and that they can form a significant role in a center-left coalition at Westminster."

Exit polls from the UK general election indicate that the Tories are the largest party with 316 seats - 10 short of the necessary majority. The SNP is estimated to have won all but one of Scotland's 59 seats. (07.05.2015)

Results from the UK general election will trickle in overnight. Yet the true outcome may take days, or weeks, to materialize - if the polls bear out. At London's Victoria Station, DW's Mark Hallam met commuting voters. (07.05.2015)