How many seats do the Conservatives and Labour need to avoid a coalition? Why is everyone talking about the Scottish National Party? Can UKIP expect MPs? All this, and more in DW’s numerical tour of the British ballot. 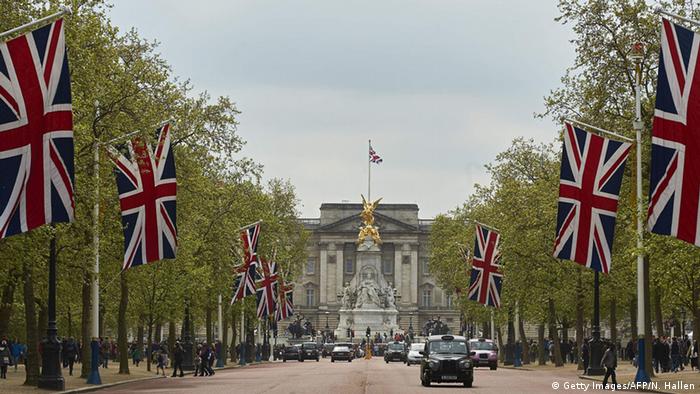 With the royal baby Charlotte politely born, and named, ahead of time, voters in the UK can now turn their attention to the ballot box. For William and Kate's babe, the numbers are simple: she's their second-born and the fourth in line to the throne.

In UK elections, with first-past-the-post voting, the numbers used to be just as easy: whichever party won the most votes and seats would likely lead the government. But for the second vote in a row, a "hung parliament" - in which no single party has a majority - appears the likely scenario. That makes matters considerably more complex, but DW can talk you through the key digits to better understand Thursday's results.

650 - The total number of constituencies in England, Scotland, Wales and Northern Ireland; by extension, the number of parliamentary seats in Westminster. With no proportional representation, only these 650 mini-elections matter - a party's share of the nationwide vote is ultimately meaningless.

326 - Half the seats, plus one - the classic winning post. No party is polling well enough currently for a single party government, nobody's even close. The Tories and Labour are both hovering in the region of 280. In 2010, the Conservatives managed 303, later allying with the Liberal Democrats.

57 - Liberal Democrat seats claimed in 2010 - more than enough to turn the Tories' tally into a majority. But it also constituted less than 10 percent of the chamber, despite the Lib Dems winning 6.8 million votes (23 percent).

2 - Current UKIP MPs, both turncoat Conservatives confirmed in by-elections. (Mark Reckless: Rochester and Strood. Douglas Carswell: Clacton.) Polls suggest UKIP might struggle to build meaningfully on this number of seats, despite projections of more than 10 percent of the popular vote. Sitting MP Mark Reckless (r.) is one of the main hopes for UKIP party leader Nigel Farage (c.) on Thursday

1 - Current Green MP. (Caroline Lucas: Brighton Pavilion.) The seat's under threat, no constituency is safe for the Greens on Thursday.

59 - The number of seats in Scotland.

41 - Gordon Brown's big 2010 haul for Labour in Scotland, even in defeat to David Cameron. For Labour leader Ed Miliband now, keeping hold of this stronghold would open the doors to 10 Downing Street. But enter Nicola Sturgeon and her Scottish National Party's post-referendum surge...

6 - The SNP won just six seats in 2010 in Scotland, when voters largely sided with Labour or the Liberal Democrats. This week, however, the SNP is predicted to win somewhere between 42 and 57 of Scotland's seats - which would almost certainly make them Westminster's third-largest party.

26.1 - The percentage of female candidates in the running, or almost exactly half the quota of women in Britain's population. Among the major parties, UKIP (fielding candidates for 624 of the 650 seats) has the fewest female nominees, at 14.7 percent of their total. 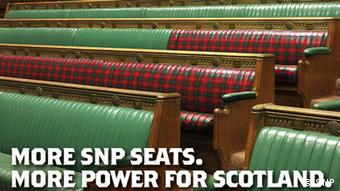 An SNP surge could make the nationalists the ideal coalition 'kingmakers,' but will any party join them?

1,460,000,000,000 - the rough total, in pounds, of Britain's national debt. It equates to around $2.2 trillion or 1.98 trillion euros - roughly 80 percent of gross domestic product. For all the campaign talk of the economy and austerity, this figure is still rising; Finance Minister George Osborne has not yet managed to cut and tax his way to the "black zero" achieved by Wolfgang Schäuble in Berlin for 2014.

240 - Four hours, or 240 minutes: the government aims for 95 percent of all accident and emergency hospital patients to be treated or discharged within four hours. In the last quarter, only 91.8 percent received such speedy service. The state-funded National Health Service has become something of an election football.

1.9 million - UK employment figures have risen during Cameron and Clegg's government. However, critics say that despite the increase in almost 2 million people collecting pay packets, an increase in low-wage, part-time or even "zero-hours" contracts means that the improvements are more quantitative than qualitative.

913,000 - The number of emergency food parcels given out in 2014 by the Trussell Trust charity in the UK. Rising reliance on food banks is often highlighted by austerity's opponents as an example of the cuts starting to bite in Britain. The figure was made public in an open letter signed by 500 clergy members, who called the increase in food bank usage "terrible." 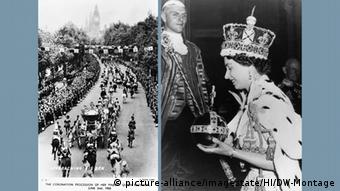 10,000 - The net monthly rate of incoming migrants pledged by the Conservatives before the 2010 election. A promise they could not meet, with the current figures north of 20,000 per month.

2.3 million - estimated number of EU citizens living in UK: a point of concern for UKIP.

1875 - Aston Villa Football Club was founded in 1875, as David Cameron should note. His uncle, Sir William Dugdale, was once the club chairman, and took Cameron to a Villa Park match in Birmingham as a child. Cameron's claimed Villa as his club ever since. Embarrassingly for the prime minister, in a recent speech he urged people to support West Ham - a London club that plays in the same claret-and-blue kit as Villa.

13 - A baker's dozen of prime ministers have occupied 10 Downing Street since Elizabeth II became Queen. Although, with Labour's Harold Wilson serving two separate stints, only 12 different people have held the office during Elizabeth's reign. Margaret Thatcher was the last British PM to be older than the monarch, by just one year.

26** - British prime ministers who went to Oxford University, most recently incumbent David Cameron. His main challenger, Labour leader Ed Miliband, would become number 27 if elected. Cambridge, on 14, is a relatively distant second; the University of Edinburgh, having taught two prime ministers, is a genuinely distant third. (**If we're counting the shortest-serving "prime minister" in the UK's history, 1st Earl of Bath William Pulteney, then Oxford could already claim 27 - however, the university does not consider the Earl of Bath's "48 hours, three quarters, seven minutes and eleven seconds" in office in 1746 as sufficient to make the list.)

19 - Forget higher education. For many, the prime ministerial grooming process starts much earlier. Nineteen is the number of British Prime Ministers who attended Eton College, an exclusive private high school in London, finishing with David Cameron. London Mayor Boris Johnson, a fellow Conservative and former Eton head boy, has been touted as a potential number 20. Princes William and Harry are among other notable recent graduates; young Prince George might go, but Charlotte presumably won't be eligible for the boys' college. 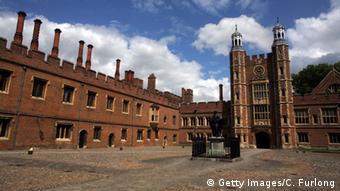 The training ground for England's elite since 1440, Eton College in London

9,000 - Britain's prime ministers had the right to free university education - unlike present-day students. Universities can charge a maximum of 9,000 pounds ($13,600, 12,100 euros) per year for tuition fees. Before the current coalition, the figure stood at 3,000. This poses a problem for junior partners, the Liberal Democrats: they pledged to scrap the fees in their 2010 campaign, only to subsequently tip the vote to treble them.

77.67 - Highest ever overall turnout, from the 1992 general election. Margaret Thatcher's replacement John Major secured another Tory term, before the Tony Blair and Labour landslide of 1997.

14,093,007 - Another one from the 1992 general election. No elected party has ever claimed more than the 14 million-plus votes awarded to John Major's Conservatives that year. At the time, the UK's population was 57.6 million. Judging by the polls, this record is virtually guaranteed to stand for at least five more years.

145 - Labour's 1997 net tally of "gains" - constituencies they wrestled away from a different party - when they swept 43 percent of the vote and claimed a 418-seat supermajority. No greater "swing" has ever marked a British election. After gradual erosion, Gordon Brown saw 91 seats slip away in 2010, allowing the Conservatives back into power. Ed Miliband would need to conjure up net gains of 68 in this election to claim outright victory.

35.6 - Voter turnout as percentage from the 2014 European Parliament elections, perhaps helping to explain UKIP's outright victory with two-thirds of voters staying at home.

Ex-prime minister Tony Blair has given a speech slamming David Cameron's plan to hold a referendum on Britain's EU membership ahead of the general election. It could have grave consequences for the economy, Blair warned. (07.04.2015)