Ad revenue has effectively sustained websites flagged as disinformation sources with millions of dollars, according to a study. Despite talk of regulation, experts told DW the issue needs a "whole-of-industry solution." Websites designed to mislead the public and spread disinformation are receiving millions of dollars in advertisement from some of the world's biggest companies — though the latter are likely unaware of the issue.

Around 20,000 websites posing a disinformation risk generate an estimated $235 million (€213 million) annually, according to a study published on Monday by the London-based Global Disinformation Index (GDI).

"Disinformation is driven by a variety of different actors with different incentives," GDI program director Craig Fagan told DW. "One of the incentives we see is the financial one."

Indeed, advertising revenue has long contributed to the viability of controversial sites, with former Trump aide and far-right ideologue Steve Bannon describing it as the main revenue stream for right-wing media in a video published earlier this year.

Upon further investigation, DW found that adverts for major German companies were displayed on websites such as Twitchy and Zero Hedge, which have been flagged as sources of disinformation.

The companies included railway operator Deutsche Bahn, automaker Opel, Deutsche Telekom, Postbank and book retailer Thalia, among others. While it is unlikely that these companies are aware their advertising money is effectively funding disinformation, the fact highlights the problem with today's digital advertising ecosystem. 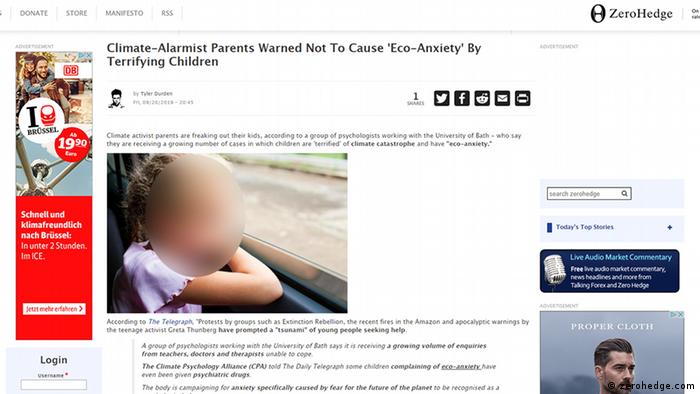 An advert for Deutsche Bahn is displayed on Zero Hedge, which the EU's counter-disinformation task force says maintains 'a strong line of support to Russian foreign policy ambitions'

Digital advertising is largely driven by the use of software to buy and sell advertising space across the internet, a technique known as programmatic advertising. It comprises two-thirds of spending on digital advertising, generating $84 billion (€76 billion) in 2019, according to investment agency Zenith. It is projected to well surpass that by 2020.

Companies often resort to ad exchanges, such as Google, AppNexus or Amazon, to advertise online. Ad exchanges act as intermediaries between brands and publishers, relying on sophisticated software to buy and sell billions of impressions, often in real time. However, the ecosystem lacks transparency, with industry observers describing it as the "Wild Wild West."

In June, the United Kingdom's data protection regulator outlined major concerns with the industry, saying changes needed to be made to ensure compliance with regulation, including the EU's General Data Protection Regulation (GDPR).

"Many people will not have given a moment's thought to the complex process that leads to advertisements appearing on the webpages and apps they use, but behind the scenes is a complex and large-scale system," said British Information Commissioner Elizabeth Denham.

Regulation on the table

A German government report published in June said business models such as programmatic advertising are "problematic" and "should not be left unregulated."

The report said automated ad placement as exemplified in programmatic advertising could further accelerate the proliferation of disinformation in tandem with social media and other high-risk mediums. Such disinformation events could have significant political, social or economic consequences.

Germany has spearheaded efforts to combat illegal content online, such as hate speech and incitement to violence. However, legal approaches to combating disinformation remain a contentious subject due to concerns over freedom of expression. The government report suggested further discussion on whether platform operators, including ad exchanges, should be held responsible within a regulatory framework.

But not everyone believes that this solution is an appropriate answer to the problem. GDI program director Fagan told DW that only a cross-platform approach would be sufficient to curtail disinformation and its financing through advertisement revenue.