Germany's disgraced former Defense Minister Karl-Theodor zu Guttenberg has returned to the political stage, albeit far away in Canada. After the dodgy doctorate debacle, is this the first sign of a comeback? 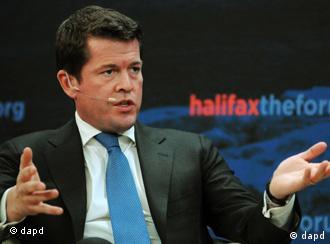 German aristocrat and former conservative shooting star Karl-Theodor zu Guttenberg made his first public appearance at an international security conference in Canada over the weekend, some nine months after a plagiarism scandal forced him to step down as a member of Chancellor Angela Merkel's cabinet.

The former defense minister - who was also a heavily favored future candidate for chancellor - was forced to give up his position in March after it became apparent that he had plagiarized various sources, including national newspapers and government reports, in his doctoral thesis.

Guttenberg, sporting a new look at the Halifax International Security Forum in Canada, was referred to as "the honorable Karl-Theodor zu Guttenberg, distinguished statesman, Center for Strategic and International Studies (CSIS)" when introduced to the audience of some 300 people. Guttenberg moved to the US with his family in the summer, and works at CSIS, a think tank based in Washington.

"It's great to watch Europe from the US at the moment. It's very interesting," Guttenberg said in reference to the ongoing sovereign debt woes plaguing the eurozone and EU as a whole. "This isn't a euro crisis or a debt crisis, this is a crisis of understanding and a crisis of political leadership."

No glasses, no gel 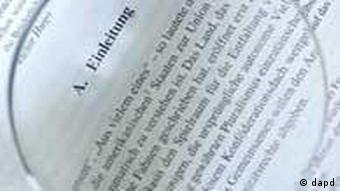 The thesis introduction was among the plagiarized passages

Guttenberg, without his trademark round-lens glasses and meticulously slicked-back coiffeur, went on to say that too few German politicians understood the nature of the European Union. He accused political leaders on his home continent of "stumbling from one ad hoc solution to the next."

Guttenberg participated in a forum discussion that ran for a little over one hour, at a summit with other prominent security figures, including former US presidential nominee John McCain, Israeli Defense Minister Ehud Barak and US Secretary of Defense Leon Panetta.

"The FAZ stayed true to their initial convictions in the Guttenberg case, even though they had to withstand a storm from parts of their own Guttenberg-friendly readership as a result," said Markus Grill, a chairman in the awarding body.

Guttenberg's doctoral title has since been revoked by the University of Bayreuth, and he may yet face trial on charges of violations of copyright law in writing his thesis. The former defense minister did not speak to journalists on the sidelines of the forum.

Shortly before the plagiarism allegations surfaced early this year, opinion polls had suggested Guttenberg was Germany's most popular politician.

Thousands of people took to the streets in several German towns and cities to show their support for former German Defense Minister Karl-Theodor zu Guttenberg, who resigned over a plagiarism scandal on Tuesday. (05.03.2011)