Demonstrators show support for ex-defense minister | Germany | News and in-depth reporting from Berlin and beyond | DW | 05.03.2011

Thousands of people took to the streets in several German towns and cities to show their support for former German Defense Minister Karl-Theodor zu Guttenberg, who resigned over a plagiarism scandal on Tuesday. 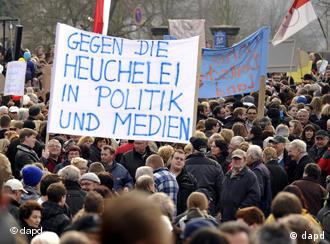 Nearly 2,000 Guttenberg supporters turned up in his hometown

Around 2,000 demonstrators lined the streets of the northern Bavarian town of Guttenberg, the hometown of former German Defense Minister Karl-Theodor zu Guttenberg, showing their support for the politician who resigned on Tuesday following a plagiarism scandal.

Guttenberg's father, the conductor Enoch zu Guttenberg, was among the supporters and described the criticism directed at his son as a "manhunt," adding that "the desire of his political opponents to hunt him down shows a scary lack of empathy in this country."

He also lashed out at the media, calling their coverage a "schlachtfest," a German word for a celebration that features freshly slaughtered pigs. 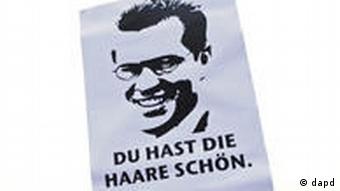 There were also pro-Guttenberg demonstrations in Hamburg, Berlin, Munich and Rosenheim.

But the youth organization of the Christian Democrats, the Junge Union, which had called for the demonstrations, anticipated a much higher turnout in places like Hamburg, following a Facebook campaign entitled "We want Guttenberg back" which has over 570,000 followers.

In Berlin, the turnout was very low and a handful of supporters were outnumbered by counter-demonstrators gathered at the Brandenburg gate, holding up ironic signs reading "Monarchy - now or never" and "Gutti for Kaiser," alluding to Guttenberg's aristocratic roots. 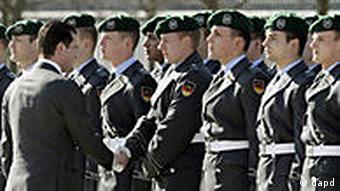 Guttenberg resigned after a plagiarism scandal

On Tuesday, Guttenberg resigned following allegations that he plagiarized large portions of his doctoral thesis. He had been one of Germany's most popular politicians in recent years. Chancellor Angela Merkel had defended him in the wake of the scandal.