Ex-Defense Minister Guttenberg set for move to US | Germany | News and in-depth reporting from Berlin and beyond | DW | 16.08.2011

Former German Defense Minister Karl-Theodor zu Guttenberg - once touted as a future German chancellor - is moving to the United States following a damaging plagiarism scandal that saw him resign, a newspaper claims. 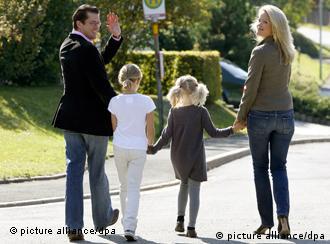 Guttenberg is expected to write and lecture

The newspaper quoted Guttenberg's wife, Stephanie, confirming speculation that the couple and their two daughters were planning to move to the US east coast.

According to the report, the family will move in the coming weeks but there are no plans to leave Germany forever.

"We are not emigrating, we remain wholeheartedly German and we will be coming back, that much is clear," said the wife of the former minister.

However, she gave no indication of what career path the 39-year-old, who also served as an economy minister, intended to pursue. An earlier report by the German broadcaster ARD, in July, had suggested that he planned to write a book and give lectures.

There had been speculation ever since Guttenberg stepped down in March that he might consider emigrating to the US, with ARD reporting that he had bought a home in Connecticut.

Before it came to light that he had plagiarized tracts of his doctoral thesis, Guttenberg had been rated in polls as Germany's most popular politician. He had been touted as a possible successor to Chancellor Angela Merkel.