Germany′s darling defense minister trips up but remains popular | Germany| News and in-depth reporting from Berlin and beyond | DW | 23.02.2011

Defense Minister Karl-Theodor zu Guttenberg is Germany's most popular politician. A plagiarism scandal has tested this charismatic rising star with noble roots, and yet he's just as beloved as always. 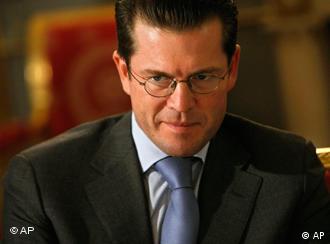 This may be the minister's toughest challenge yet

Accused of plagiarizing large chunks of his Ph.D. thesis, Germany's defense minister has said he would renounce his doctorate and has stopped using Dr. in his name. But even without the title, Karl Theodor Maria Nikolaus Johann Jacob Philipp Franz Joseph Sylvester Freiherr von and zu Guttenberg is a mouthful.

Despite being known for his modern and straightforward manner, Guttenberg is a real aristocrat. He was born in Munich in 1971 and raised in a Bavarian castle. His wife is a descendent of Otto von Bismarck, the father of the modern German state. 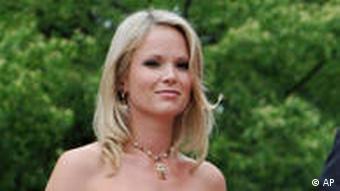 Guttenberg and his wife are seen as a glamorous couple

Like many in his family he was active in the CSU at the local and regional level. By the time he became the party's youngest secretary general ever in 2008 at 36, he had spent time in the military, finished that now troublesome Ph.D. in law and started a family.

But becoming CSU secretary general was just the beginning. In February 2009 he entered Merkel's government as economics minister. It was a tough time for the German and global economy, but Guttenberg won points with the people for taking a hard line against a state bailout during negotiations on saving automaker Opel. 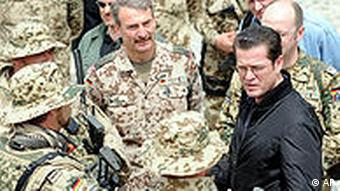 Later that same year Guttenberg made another career leap, taking over for Franz-Josef Jung in Merkel's second cabinet as defense minister. He earned respect in that position when he broke a taboo and used the term "war" when referring to the German military engagement in Afghanistan.

He has also advocated for a modernization of the German military. He proposed, and won, an end to compulsory military service - a defining institution in German society since the 1950s - in favor of a professional army more able to meet the country's obligations in Afghanistan.

Guttenberg has visited Afghanistan several times since becoming defense minister and even brought his wife along this last December to thank the troops for their service before Christmas. The trip was labeled a publicity stunt by opposition politicians, but the criticism didn't seem to stick.

As his career has progressed, Guttenberg's popularity has grown. Even after the plagiarism scandal he's still the most-liked politician in Germany. He's been referred to as the "Teflon Minister," maintaining high ratings even as he comes under fire over scandals such as the harassment of junior soldiers in the military or the friendly fire deaths in Afghanistan. Last year the media even began floating the idea that the 39-year-old was set to become the next chancellor.

Most of that speculation has given way now to word-by-word analysis of his doctoral thesis for evidence of cheating. But Guttenberg has said he has no intention of stepping down and he remains popular. An Emnid poll published Sunday in the weekly German newspaper Bild am Sonntag found that only 27 percent of those asked said they wanted the defense minister to resign.

Germany's defense minister has stood his ground against sharp questioning related to charges he copied much of his doctoral thesis. The grilling came after his alma mater denied his request to take back his doctorate. (23.02.2011)

In the midst of an ongoing investigation regarding plagiarism in his doctoral thesis, German Defense Minister Karl-Theodor zu Guttenberg has given up his doctor title for good. (21.02.2011)