In the midst of an ongoing investigation regarding plagiarism in his doctoral thesis, German Defense Minister Karl-Theodor zu Guttenberg has given up his doctor title for good. 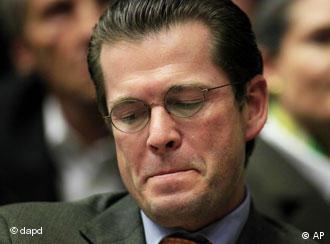 Guttenberg admitted his dissertation was problematic

Defense Minister Karl-Theodor zu Guttenberg gave up his doctor title on Monday in the midst of an investigation into charges that he plagiarized large sections of his doctoral thesis.

Guttenberg's alma mater, the University of Bayreuth, told German public television that the defense minister had asked them to retract his doctorate in law.

Guttenberg had initially announced on Friday that he would not use his doctor title until a pending investigation by the university was completed.

Speaking at an election rally near Frankfurt, Guttenberg said a closer inspection of his thesis over the weekend led him to make the decision to give up his title permanently.

"Over the weekend I had another look at my doctorate thesis," he said. "The decision to give up my doctor title is painful."

'Not the self-defense minister'

However, Guttenberg admitted that mistakes were made in the thesis.

"I made mistakes, but they weren't intentional," he said.

At the rally, Guttenberg made light of the situation in front of around 900 Christian Democrat supporters.

"What you see here is the real thing, not a fake," he said from the podium. "I didn't come here as the self-defense minister."

The plagiarism claims have put Guttenberg under fire from the German media and members of the opposition in government. Over the weekend, Guttenberg dismissed claims that he should resign over the incident.

Commentators see this as an attempt by Guttenberg to take the wind out of the sails of the campaign which is building up against him. Many of his political allies are keen to see him remain in office, since he is currently by far the most popular German politician, and has been seen as a future premier of his home state, Bavaria, or even as a future Chancellor.

Colleagues of German defense Minister Karl-Theodor zu Guttenberg have rallied to his defense over plagiarism claims. Guttenberg, one Germany's most popular politicians, is accused of copying in his doctoral thesis. (17.02.2011)