British researchers claimed to have detected a gas that indicates that microbes live on the inhospitable planet. But Dutch scientists have called their claims into question. How did they get it so wrong? 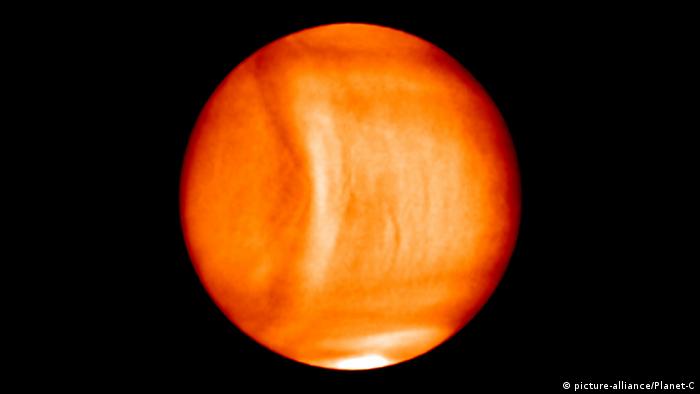 Dutch researchers have called into question the recent research results of British astronomers who claimed to have discovered the gas phosphine  high up in the atmosphere of Venus.

The team, led by Ignas Snellen from Leiden University, reexamined the original data and came to a completely different conclusion. The detection of the gas was not statistically significant, the researchers said, and may have simply been a measurement error. Their results have been published as a non-peer-reviewed preliminary study in the journal Astronomy & Astrophysics on the preprint platform arXiv.

The British astronomers announced the discovery of potential signs on life on Earth's neighbor on September 14 in the journal Nature Astronomy.

According to the British study, scientists working with telescopes located in Hawaii and Chile found signatures of clouds containing phosphine, a noxious gas that on Earth is associated with life.

"It's not a smoking gun," said study co-author David Clements, an astrophysicist at Imperial College London. "It's not even gunshot residue on the hands of your prime suspect, but there is a distinct whiff of cordite in the air, which may be suggesting something.''

Though Clements gave only a 10% probability to the presence of life on Venus, he was excited about the possibility.

On Earth, phosphine gas has been found to exist as the product of an industrial process or as an output of an unknown process in some animals and microbes.

Phosphine has been found as "ooze at the bottom of ponds, [in] the guts of some creatures like badgers and perhaps most unpleasantly associated with piles of penguin guano," Clements explained.

The astronomers explained, however, that at 30 miles (48 kilometers) above the surface, a thick layer of carbon dioxide cloud cools down to around room temperature and contains droplets with small amounts of water along with mostly sulfuric acid.

The authors speculated that any potential life would most likely be single-cell microbes existing within those acidic droplets.

Another possible explanation for the phosphine gas is volcanic activity, according to Justin Filiberto, a planetary geochemist at the Lunar and Planetary Institute in Houston. "I'm not skeptical, I'm hesitant,'' he said regarding the discovery.

"I'm excited, but I'm also cautious,'' commented David Grinspoon, an astrobiologist at the Planetary Science Institute in Washington. "We found an encouraging sign that demands we follow up.''

NASA is currently considering its first missions to Venus since 1989.

This article was originally published on September 16, 2020 and has been updated on October 23, 2020 to reflect the publication of the new study on ArXiv.