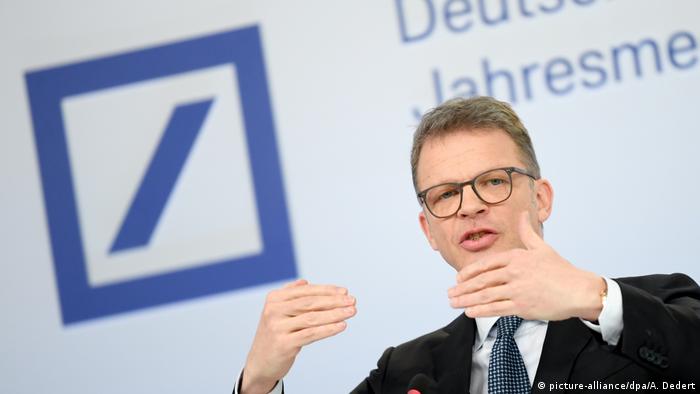 Anyone planning to renovate their house faces the same tricky question as Deutsche Bank of how to finance the undertaking. In the case of Germany's biggest private lender, the task seems to have taken on herculean proportions, with the cost of bringing its house in order driving the bank ever deeper into the red.

In recent years, a succession of Deutsche Bank chief executives has been trying to shed the financial burdens of an often criminal past, refocus on more profitable revenue streams, get rid of excess labor and enter the era of digital banking. That all seems to have been to no avail because the lender again has reported a massive annual loss in 2019 — the bank's fifth consecutive year without turning a profit.

Last year, the shortfall amounted to €5.7 billion ($6.28 billion). One might think the figure provides scant reason for management to talk of a change in the bank's fortunes. But not so with current CEO Christian Sewing, who was trying to spread optimism despite the dull figures he had to present on Thursday.

At the helm of Deutsche Bank for two years now, Sewing said that the worst was over and that the restructuring was paying off. "If we continue to remain as committed, disciplined and engaged as in the past six months, I'm confident for 2020 and beyond," Sewing said in a letter to Deutsche Bank staff.

Deutsche Bank's existing 87,000 employees may have read the CEO's letter with mixed feelings though. The lender's cost-cutting exercises of the past few years have already slashed more than 10,000 full-time jobs. Another 8,000 employees are scheduled to lose theirs in the coming months. So far, the payroll reductions have cost the bank about €7 billion.

Sewing said that about 70% of the costs from staff cuts have been accounted for in the balance sheet, and make up a large part of the 2019 loss. Deutsche's CEO, who has spent almost his entire career at the bank, even thinks the time has come to shift into attack mode by refocusing the bank's operations from an emphasis on restructuring to boosting growth.

"We no longer just want to defend our market share, we want to expand it. We are attacking and doing it in a sustainable way." In this drive, Sewing is planning to give up some of the bank's legacy business in order to advance where the lender is "relevant and leading."

In July last year, the CEO refocused Deutsche Bank towards the business of lending to corporations and individuals, as well as financing Germany's strong sector of small and mid-sized companies (SMEs). Retail banking is also central to Sewing's new strategy, which is primarily happening to the detriment of its investment banking division. Deutsche's traders were responsible for a series of financial scandalsduring the financial crisis, which resulted in massive penalties by regulators, especially in the United States.

Long gone are the days when the flagship of German banking was on a par with its US competitors. The combined profits of the American giants JP Morgan, Citi, Bank of America and Goldman Sachs totaled a record $91billion (€82.5 billion) last year alone. They're an afront in the face of Deutsche's downfall.

But hope dies last, as they say, and there is a slim chance that the bank will, indeed, return to profitability on the occasion of this year's 150th anniversary. Chief Financial Officer James von Moltke told investors in October that he expected "a balanced result or a little more." On Thursday, he reiterated his upbeat perception about this year.

Some investors seem to share von Moltke's view. Deutsche Bank's stock on Thursday jumped above €8 per share for the first time in many months and has added 15% since the beginning of the year. A look at the share price 5 years ago, which was 66% higher, shows however that Deutsche Bank still has a long way to go until it sees light at the end of the tunnel.

Investigators carried out searches at Deutsche Bank and its subsidiary DWS as part of an investigation into investment fraud.