Deputy Secretary General: NATO would beat 'Islamic State' should it cross into Turkey

NATO's Deputy Secretary General Alexander Vershbow tells DW that the Atlantic military alliance would defeat IS should they be foolish enough to attack Turkish territory. He also warns of a frozen conflict in Ukraine. 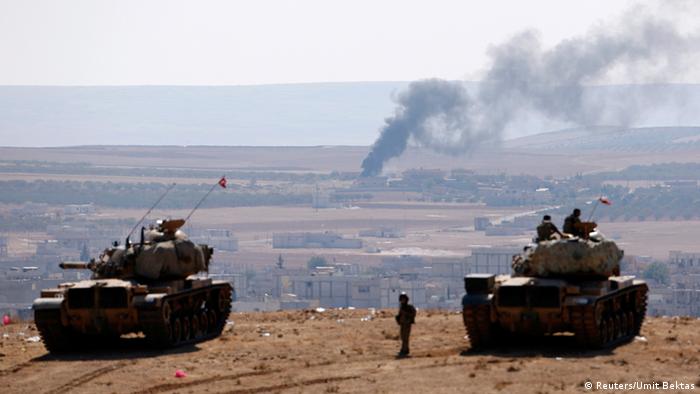 DW: Turkey said that NATO had drawn up a plan to defend the country in case of an attack by Islamic militants on its Syrian border and NATO Secretary General Stoltenberg confirmed that NATO would come to Turkey's help under Article 5 if attacked. Given Germany's current military problems, do you expect Berlin to play any military role in such an event beyond the two Patriot air defense systems currently stationed in Turkey? 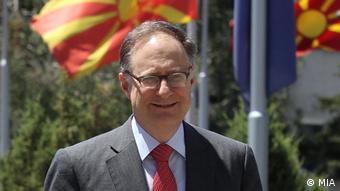 Vershbow said NATO has plans to defend any threatened member

Alexander Vershbow: We don't get into a detailed discussion about our contingency plans in public. But rest assured: We have contingency plans for the defense of all of our allies who could be at risk. As the secretary general said, Article 5 is always there for allies and we stand ready to defend Turkey if it is directly attacked. It would have to be a collective decision and each nation would then decide where it could best contribute. I think it's a good demonstration of solidarity that Germany has now been deploying the Patriots for two years, which was a response to a threat that still exists, a ballistic missile attack on Turkey. What might happen in a future scenario is really not appropriate to speculate about.

While Turkey has reached out for NATO's help in defending the country, Ankara has been criticized not only for its refusal to join the military coalition against the "Islamic State," but also for allowing the country to become a sort of hub for IS fighters. Are you happy with the role Turkey plays to in the fight to counter the threat posed by IS? 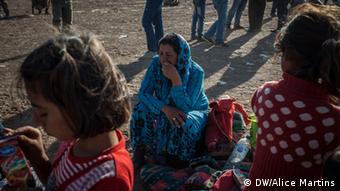 Turkey has taken in thousands of Syrian refugees

Turkey is an important ally living in a very tough neighborhood. I think they themselves recognize that the policy of zero problems with neighbors of a few years ago has not played out as optimistically as all of us would have hoped. My understanding is that Turkey is and does understand itself to be part of the coalition. It was present at the original meeting at the Wales summit. But the question now is what concrete contribution will Turkey make. It's already making a big contribution - that's extremely onerous - and that is hosting hundreds of thousands of refugees, a number that continues to rise. The coalition is not just about military action; it is also about mitigating the effects of the conflict that is now escalating with ISIL.

How confident are you that NATO could defeat IS should they try to cross into Turkey?

NATO has lots of military capability. And of course Turkey itself has also lots of conventional military capability to defend its territory if ISIL were to launch aggressive attacks across the border. I don't think there is any doubt that NATO collectively can outmatch ISIL in a head-to-head conflict should they be foolish enough to cross the border. The more difficult challenge is for the coalition, not for NATO, to stop ISIL's advance, especially in northern and western Iraq effectively enough to allow the time needed to rebuild and reinforce the Iraq security forces, so that we can then turn the tide and beat back ISIL's advance and ultimately degrade and defeat them.

The crisis in the Middle East has overshadowed, at least for now, the situation in Ukraine, There is a fragile ceasefire is in place but the violence still continues on a lower level. Could the Ukraine crisis turn into a frozen conflict? 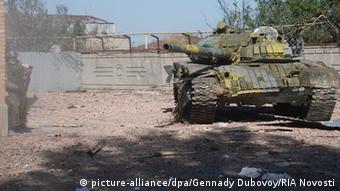 Despite an official ceasefire, some fighting has continued in eastern Ukraine

I think that's a serious danger right now, and I think that is what Russia is trying to do in eastern Ukraine. From our perspective at NATO, and I think this goes even beyond NATO to the EU, we are all insisting that Russia live up to every aspect of the Minsk agreement and not allow it to be implemented selectively. The ceasefire was supposed to freeze the conflict in place of positions since September 19. But of course the separatists with continuous Russian military support that is flowing across the uncontrolled international border have been escalating their attacks on the Donetsk airport.

That is unacceptable. We need to see full implementation which includes Ukrainians getting the ability to control their own international border. Russia needs to make clear to the separatists that it does not support the elections that they are purporting to hold on November 9, which would have no legitimacy and are inconsistent with the Minsk protocol. It's a very fluid situation. The ceasefire is not holding in some areas and there could be a serious deterioration in the coming days.

Turkey seeks help in meetings with NATO and US on 'IS'

Turkey has reiterated its stance that fighting the "Islamic State" alone is "not realistic." NATO and US envoys are meeting with Turkish officials over the next two days amid a border crisis. (09.10.2014)

Turkey says it will only take up arms against IS if Obama agrees to once again target Syrian President Bashar al-Assad. Ankara's foreign policy is like shopping at a Turkish bazaar, says DW’s Miodrag Soric. (09.10.2014)

Clashes in eastern Ukraine as German aid convoy rolls in

Ukraine's government has reported fresh fighting around the airport in Donetsk, saying five soldiers were killed there. With the month-old ceasefire still shaky, a German aid convoy has crossed the border from Poland. (07.10.2014)