Liberal Pakistanis celebrate Valentine's Day every year despite opposition from religious groups. But some analysts say that Valentine's Day is more about Western consumerism in Pakistan than a day of romance. 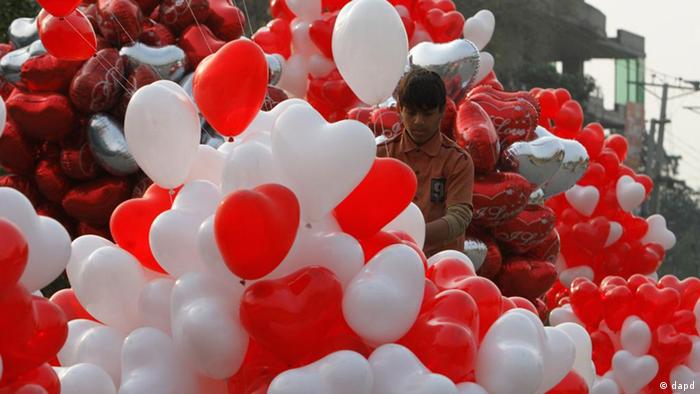 For religious groups in Pakistan, Valentine's Day is immoral and anti-Islam. These groups consider events such as Valentine's Day and the New Year to be a celebration of Western culture. For them, those who commemorate these events in Pakistan are infidels and should be punished.

Public expression of love in Pakistan is considered taboo. Religious groups are even against men and women mingling in public places. However, Pakistan, like many other Muslim countries, has a long tradition of reciting poems about love and love poetry and love poets are celebrated and honored.

On February 14 every year, religious groups hold rallies in big Pakistani cities opposing Valentine's Day. Huge banners are put up on main streets condemning the day. Religious clerics in mosques deliver sermons against the "sinful" day. There is an undeclared ban to hold public celebrations on Valentine's Day. 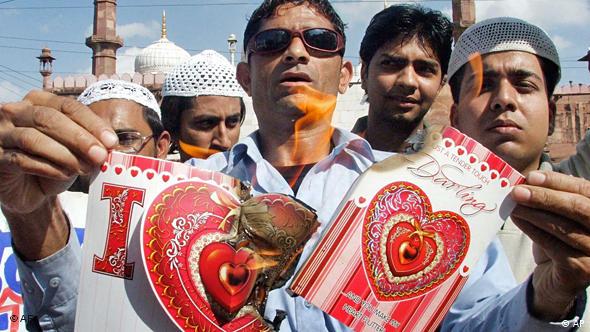 Some protest Valentine's Day, saying it is a celebration of Western culture

"Islam prohibits such activities," Abdul Waseem Burney, a religious preacher in Karachi, told DW. "Looking at the way people celebrate Valentine's Day in Pakistan, I feel as if it is part of our culture and our tradition. But it is certainly not our thing."

Burney says that the government must implement the ban on Valentine's Day activities, which, in his opinion, is spreading "vulgarity" in the Islamic Republic.

It is not only religious clerics, but also many common Pakistanis, who despise Valentine's Day and say that it has no place in a country like Pakistan.

Sohaib Ahmed, a young Pakistani in Lahore, told DW that the day was a Western tradition and should not be tolerated. "We see a lot of anti-Islamic activities in Pakistan on this particular day. Pakistanis should not imitate the West, but instead try to promote their own culture and civilization."

Sohaib said that the affluent classes of Pakistan used an event like Valentine's Day to show off their wealth and to indulge in "immoral activities." He also lamented that Valentine's Day had become more important for some people than the Prophet of Islam's birthday in the Islamic month of Rabbi-ul-Awwal.

Despite widespread opposition to Valentine's Day, every year, youngsters, particularly the liberal youth in Pakistan's big cities, defy the cultural and religious bans and celebrate it with passion.

"I think people misunderstand Valentine's Day to be some sort of un-Islamic festival, which it really isn't," A. Jaffery, a student in Karachi, told DW. "Even the smallest expressions of love are shunned because people don't understand them. In the end, it's all perception - and most Pakistanis are too socially conditioned to question themselves or things around them." 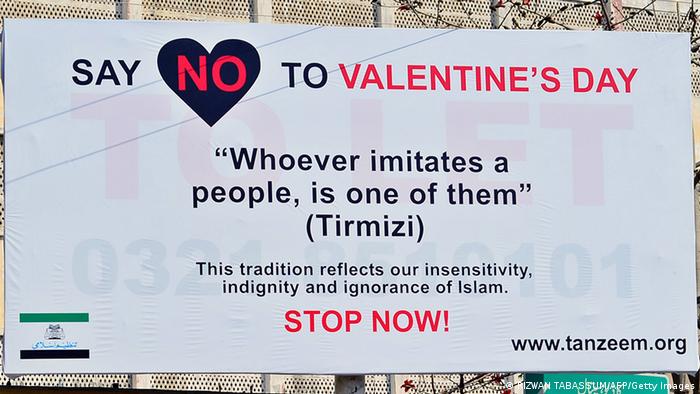 Filmmaker and social activist Wajahat Malik believes that the religious elements in Pakistan thrive on the anti-West narrative by portraying themselves as the "custodians of culture" in his country. This should be defied, he says. "Normal Pakistanis embrace all kinds of things without any religious guilt or remorse," Malik told DW in an interview from Islamabad. He, however, is of the view that in Pakistan, Valentine's Day and such events are more about the prevalent consumerist culture than the actual celebration of love.

Maciek Pollowski, a Polish humanitarian worker in Islamabad, thinks that opposition to Valentine's Day is synonymous with protesting against "Western culture."

"I think opposition to Valentine's Day in Pakistan is not much different to what we see in Poland, for example. The day is seen as part of the wholesale import of the commercialized version of the Western European and American culture," Pollowski commented. "It has become a middle class thing in Pakistani society. Nowhere in the world have I seen such devotion to Valentine's Day. India is probably the only place I know that compares to Pakistan in this respect."

But Jaffery added that in Pakistan, Valentine's Day carried a symbolic meaning of resistance too. "You see liberal young poets writing love sonnets, painters creating majestic murals on Valentine's Day. Since Pakistan is a country where you'll be probably shot for your 'Westernized' life style, all we can really do is express ourselves symbolically." 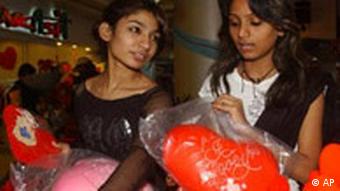 For liberal Pakistanis, Valentine's Day is a breath of fresh air in a country plagued by violence

Saima, a young girl from Lahore, does not care whether celebrating the day is seen as an act of defiance in Pakistan; she just wants to have fun.

"In a life full of problems and misery, Valentine's Day is a breath of fresh air. Expressing your love for someone is not a sin," she told DW.

Young Pakistani liberals like Saima believe that Valentine's Day is a perfect occasion to express your love and affection to your parents and siblings as well. They are also of the view that the world has become a global village and that Pakistan should not keep itself isolated.

Liberal analysts say that in a country like Pakistan, which is battling religious extremism and which has been plagued by a violent Islamist insurgency, it is a good sign that the desire to celebrate life and love is not gone.

A lot of young Pakistanis are making movies, which they say are entertaining and at the same time give out a strong message. But is the new Pakistani cinema representative of its society? (03.09.2012)