Rwanda saw its bloodiest attack in over two decades when rebels raided a town on the border with the DR Congo on Friday. The killings have sparked fear among residents of Kinigi, an area famed for mountain gorillas. 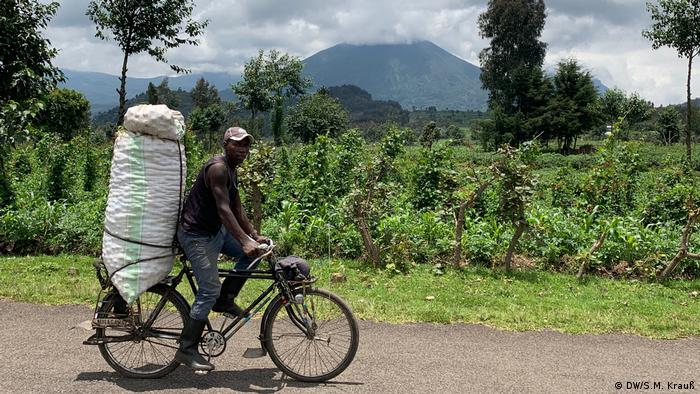 Chantal Nyirasafari was visiting her father when gunfire rang out through the small northern town of Kinigi at night. Neighbors screamed in panic. Chantal ran away, but her father could not save himself from the attackers. "My dad was at home when the attackers came in and stabbed him with knives," the 26-year-old says quietly. He sustained severe head and upper body injuries. It is still not clear if he will survive. "I was desperate and kept saying, 'I'm going to be an orphan, I'm going to be an orphan!'," Nyirasafari recalls.

Fourteen people were killed and 18 injured that night. No other armed attack has claimed so many victims in Rwanda in recent years. The rebels attacked the inhabitants of Kinigi with knives and rudimentary weapons. Kinigi is just a couple of kilometers from the Congolese border. The attack took residents completely by surprise. "They came here from two kilometers (1.2 miles) away," says Bosco Havugimana, pointing in the direction of the majestic mountain range that towers over the area. "They came straight to the village, and killed everyone they met."

Desperate hunt for the attackers

The Virunga Mountains straddle the area between Uganda, Rwanda and the Democratic Republic of Congo. In the wake of the attack, the Rwandan military began hunting the rebels in the dense rainforest of the region. "Nineteen of them were killed and five arrested," John Bosco Kabera, the police spokesman, told DW. "Apparently, the group came from the Democratic Republic of Congo and they belong to a militia called RUD-Uranana." 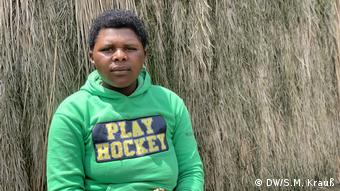 Chantal Nyirasafari's father was stabbed in the raid

RUD-Uranana is a splinter group of the notorious Democratic Forces for the Liberation of Rwanda (FDLR), a militia founded by Hutu extremists partly responsible for the 1994 Rwandan genocide. Human rights organizations also accuse the FDLR of terrible atrocities against the civilian population in the DR Congo. One of the detainees was paraded before local journalists, claiming in a short video circulating on social media that he had been recruited to the FDLR four months ago at a Ugandan university.

The Hutu rebels have been a thorn in the side of the Rwandan government for 25 years. Just three weeks ago, the government claimed that a man it has been hunting for decades, the FDLR military strategist Sylvestre Mudacumura, was  killed in a Congolese military operation, with the help of Rwandan Special Forces. Mudacumura was the subject of an arrest warrant issued by the International Criminal Court for war crimes. It is unclear whether the attack on Kinigi was an act of revenge for his killing. "Investigations will continue to clarify the background and motives," Kabera says.

In the decades since the genocide, in which over 800,000 Tutsi and moderate Hutu were murdered, Hutu rebels repeatedly launched attacks from eastern DR Congo. 45-year-old Pascal Dusabimana remembers the days the rebels came to Kinigi through the forest. "They carried out several attacks in 1997 and 1998. They wanted to destabilize the country." This recent raid has brought these painful memories back to life. 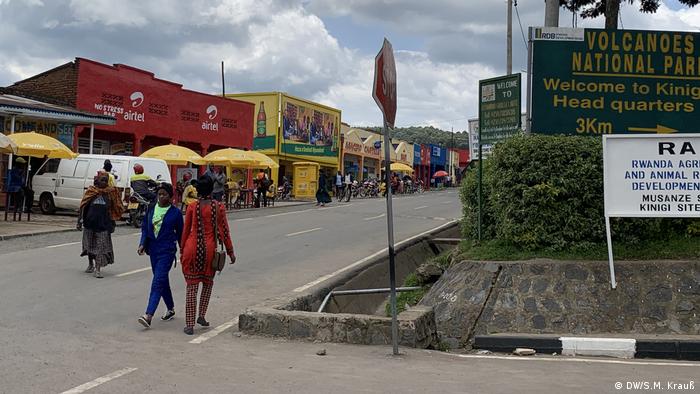 Kinigi is Rwanda's gateway to the Volcanoes National Park. The world's last mountain gorillas live here and in neighboring Uganda and DR Congo. Guided tours start daily at the tourist center. Gorilla tourism is an important pillar of Rwanda's economy, with revenue up in 2018 to $19.2 million (€17.5 million).

A day after the Kinigi attack, Rwanda's state development agency RDB said tourism in the region, and gorilla tours, must continue and guaranteed the safety of tourists. Tourists were not the target, RDB officials told DW. Nonetheless security measures have been beefed up, the agency says. No traveler has canceled their visits so far. 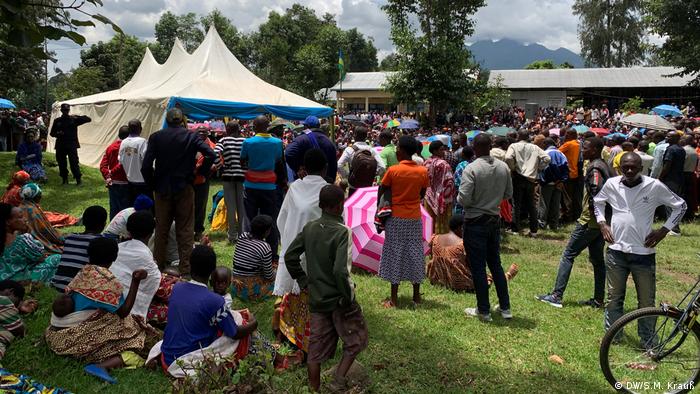 Kinigi is famous for its mountain gorillas

Read more:Rwanda's opposition rattled by killings and disappearances of members

American tourists John and Carla Edwards learned about the bloody attack upon their arrival on Monday. Their tour operator had hired two extra security personnel on the trip to Kinigi. To cancel the gorilla visit was out of the question for the two. "To be honest, I did not even feel scared once," says Carla Edwards. She felt safer in Rwanda than in her homeland. "When I try to equate it with Chicago — we live in Illinois — they kill 100 people a month in Chicago. Do I go to that area? No."

Meanwhile, normality has returned to the streets of Kinigi. Potatoes, tomatoes and bananas are sold at the roadside. Children run home laughing from school. Hundreds of people listen to speakers at an information event held about three kilometers from Kinigi. On the side of the road police and security forces stand guard. A pickup truck with twelve armed soldiers drives past — in the direction to the DRC. Life seems normal amid concerns over further attacks.

A woman in the West African country has built a successful 100% natural cosmetics range using the power of local fruits and vegetables.