Deadlock paralyzes Italy | Europe| News and current affairs from around the continent | DW | 03.04.2013

Specialists are scrambling to resolve the crisis in Italy, but the country's political parties don't seem ready for compromise. To add to the worry, Italian President Giorgio Napolitano's term will end soon. 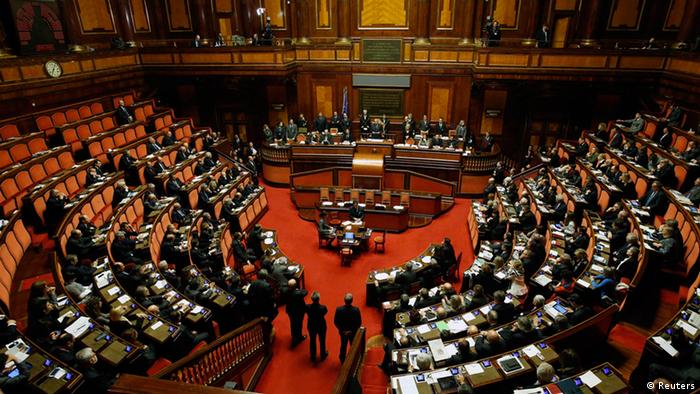 In the European Union's view, the crisis in Cyprus has calmed down. But now another, far larger crisis appears to be brewing: efforts to create a government following elections in mid-February see Italy's political parties at a stalemate. Prime Minister Mario Monti's cabinet will remain in place for the interim, but it's more of a government on call.

The European Union and the international financial markets are getting more nervous by the day as they see just how disoriented the indebted eurozone member state Italy seems; just how much the political vacuum appears to grow there; and just how much the downward financial spiral seems to accelerate. In desperation, Italian President Giorgio Napolitano called together a committee of experts consisting of representatives from all the major parties and European Central Bank officials, with the aim of finding a resolution to the country's political and economic crisis. They commenced their work on Tuesday, April 2, 2014. 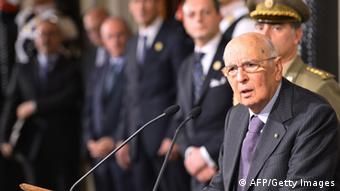 The committee of experts, whom Napolitano has dubbed the 10 "Wise Men," is divided into two working groups. One group will focus on political-institutional reforms, including electoral law. The second group is drawing up economic and social measures. Results are not expected for another week.

But not much may come of it, said journalist Giovanni Del Re, who is an EU correspondent for the Italian newspaper "Avvenire"

"They will write a great report which discusses what Italy must reform," he told DW. "But it will end there since the parties are still not willing to cooperate with one another." After all, the 10 "Wise Men" are not permitted to make decisions; they are only to provide reform pointers and analysis. But as long as politicians aren't willing to work together, Italians are speculating that the reform proposals won't even be worth the paper they're printed on.

After initial praise, the parties themselves are now also criticizing Napolitano's creation of the committee. Particularly the center-right alliance surrounding Silvio Berlusconi has called the committee's work a waste of time and is demanding new elections. That would be a mistake, said Del Re. "With the current electoral laws, we'd end up with the same chaos we have right now," he observed. No party would likely gain the Senate majority and everything would start all over again, he pointed out. "At the very least, we need to change the electoral laws," he concluded. "Otherwise, things will continue in the same vein and that could be very dangerous for the euro." 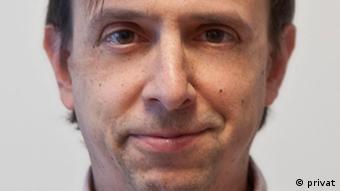 Journalist Giovanni Del Re has little optimism left for his country

In the midst of this chaos, a change at the political helm is on the horizon. Of all people, it is President Napolitano - one of the few Italian politicians considered to be reliable and trustworthy - who is due to leave office on May 15. That leaves little leeway for the 87-year-old to tackle the crisis. "He's using the rest of the time to boost the mood, but it's unlikely that he'll find a solution," Del Re said.

One in three young people is unemployed

But a solution is urgent because the ailing economy needs political stability and reforms to gain momentum again. In the past five years, industrial production shrank by one-quarter. Unemployment stands at more than 11 percent. Among those under 25, one-third are without a job. Experts assume that the country's economic output will continue to go down. The high interest rates for old and new debts also add to the country's troubles.

It seems to be in the cards that Italy will soon need EU aid. But the third strongest economic power in Europe is too big for a bailout. Analysts estimate that Italy therefore is the eurozone's biggest problem - bigger than Spain. At least Italy can still compete on an international level, though. There's no real estate bubble like in Spain, Ireland or Greece that could add to the difficulties. Also, the banking system is thought to be in better shape than in Spain or Greece.

Not ready for reforms? 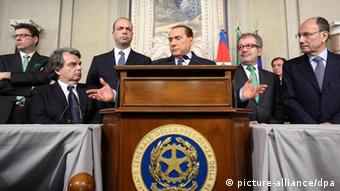 Berlusconi's surge in popularity has many observers worried

The international ratings agencies are now taking a closer look at Rome. Moody's said it would keep an acute eye on the efforts to form a new government. Experts assume that the US rating giant will eventually downgrade Italy, unless things take a turn for the better soon. But that is unlikely, according to Daniel Gros of the Brussels think tank Center for European Policy Studies (CEPS). Like many other countries, Italy was dealing with an alliance of forces unwilling to submit to reforms, Gros told Deutsche Welle. And those forces, he added, were unlikely to surrender their privileges without a fight.

"It seems that so far the crisis was not bad enough to convince the population that there really have to be substantial changes in that respect," Gros said. As long as there won't be consensus on that, there would be little the EU and Brussels could do.

But in light of the ongoing political uncertainty and the rising popularity of Silvio Berlusconi, many are beginning to doubt whether Italy is really willing to undergo painful austerity reforms. Journalist Giovanni Del Re said the election result from Feburary 25 was anything but promising in that sense. If the votes for Berlusconi and former comic Beppe Grillo were to be added, the two got around 60 percent. "And both of those parties have spoken out against the crucial reforms that the country needs," Del Rey said, adding it created the impression "that Italy hasn't really understood that many of the reforms are not necessary simply because Brussels wants them, but because Italy really needs them."